Evolution: Tilting the scales of the arms race between cobras and mongooses

Often times a mongoose will prefer easier prey than a cobra. However, getting down to brass tacks, should the two fight, it's fairly axiomatic that the mongoose takes the win the majority of the time. I haven't found any studies that formally record the win/loss ratio, but let's guesstimate the mongoose wins 80% of the time. Let's break it down; how does the mongoose pull it off?

Tale of the Tape

As we can see, the tale of the tape suggests the cobra to be the underdog in this fight. The mongoose has a more developed brain, faster reflexes, stamina and more. The cobra's Vegas odds are not very good. I want to create a world where the situation is reversed. I would like the cobra to win 80% of the time. And for all the reasons articulated above; it has proven to be a bit of a challenge.

We must be particularly cautious in making generalizations. There are many parameters involved in animal predation, resulting in very stochastic outcomes. For instance, a lone desperate roaming nomadic male lion could bring down a very large animal like a young elephant or giraffe. However, lions can also be killed by much smaller animals. Even a kick of a small impala could break the lion's jaw and leave the lion to die slowly of starvation. Not to labor the point, but other variables include: blinking at the wrong time, glare from the sun, not sleeping well the night prior, learned experience, ect. So instead of getting bogged down by every rabbit-hole that presents itself, we can simply evaluate this process at its mean -- that is to say, what will happen most of the time, holding as many variables constant as possible?

What is the most effective evolutionary response for the cobra to win the arms race against the mongoose?

Quality Metric: Efficiency. Since evolution tends to occur efficiently, things are repurposed instead of starting from scratch. When we propose evolutionary solutions for the cobra, the quality metric will be efficiency. For example, if we must re-wire the cobra to be warm blooded in order to keep pace with the mongoose, that would be a very expensive solution (to say the least) in evolutionary terms.

Time Frame: While I'm leaving this as entirely optional, I suppose the shorter time required the better.

Species: I'm intentionally leaving this ambiguous because I do not want to create a disincentive to answerers by stipulating a species he/she may have never heard of. However, if you feel this information will be helpful, feel free to use: slender mongoose and giant spitting cobra. If you don't like my picks, please feel free to choose your own.

Here are a few ideas, which are coincidentally all found in Varanoids.

This would be a very large evolutionary leap, but very effective. Cobras are Squamates, and there have been endothermic Squamates;

The study states that mosasurs' body-temperatures compared to the temperatures of modern, warm-blooded sea birds, suggesting that mosausurs were indeed warm-blooded. The study found that this tendency toward higher body temperature held despite the size of the particular mosasur genus or species – body size (gigantothermy) didn't matter.

This would allow the cobra to become much more agile and fast, a key advantage against a haemothermic adversary.

The cobras might evolve an alternate form of venom, derived from a fluid other than saliva, that mongooses had not yet evolved to defend against.

Or, it could take a leaf out of the komodo dragon's (funnily enough, a relative of mosasaurs) book and simply inject a very fast-acting infection into the mongoose. Eating rotting carrion would help this evolve.

Again, looking to the squamates, another advanced feature can be found. Gila monsters (also related to mosasaurs, coincidentally) have armoured scutes made of bone. 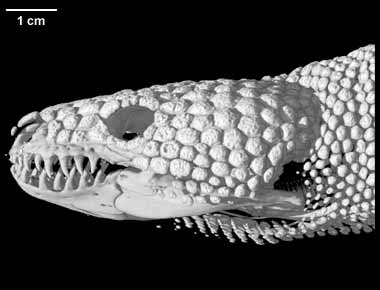 These are called osteoderms and could help protect the cobra's weak spot. They would not be shed with the rest of the skin, but grow over time. Since these might make the cobras slightly cumbersome, endothermy would work well in tandem with this to boost their agility.

A cobra the size of an anaconda probably couldn't be killed by a mongoose. Somewhere between "baby cobra" and "anaconda" is a snake that would win 80% of fights.

This already happened in nature. Opossums (specifically, members of the subfamily Didelphinae like the Virginia opossum, Didelphis virginina) also prey on venomous snakes like mongooses and have a similar immunity to the venom of local venomous snakes (albeit to pit vipers and rattlesnakes rather than cobras). However, there is one New World snake, the terciopelo (Bothrops asper), which gets around this by simply having one of the nastiest venoms possible. Indeed, terciopelo are thought to have evolved extremely potent venom specifically because of the immunity of these large opossums, circumventing this to allow what would be the prey to become the predator.

These kinds of evolutionary arms races between a venomous and non-venomous species are extremely common. Generally the way the venomous species gets around this is by evolving a more potent version of its venom, or growing larger to either produce more of it or for other reasons (larger predators can more easily handle smaller prey, and larger prey can be too large to be eaten by smaller predators). They generally don't change their morphology that much beyond that (e.g., evolving endothermy, growing additional spines or defenses, etc.).

41
How would multi-race humanoid evolution happen?
16
Is a four armed arboreal reptile as described viable?
10
Could the Hoatzins wings evolve into arms
4
Making Fortifications Viable in the Arms Race Again
8
Evolution of a feline humanoid, specifically upright walking and fingers
7
What would be the usefulness of both arms and fins on a sea dwelling, amphibious organism?
2
Evolution of a humanoid race
4
Why would my race have arms much longer then the legs?
1
What Environmental Factors Would Lead To The Evolution Of A Large, Warrior Homonid Race?