In my story, I wanted to have a world in which humanity had nearly gone extinct from being eaten by demons but eventually the demons ran out of humans to eat and thus died off or went into a sort of hibernation- the humans that survived live in a vault that has been around since 5000 years prior. How would I make it so that the vault would last that amount of time and accommodate a large population as well as a feasible energy source to pull it off?

First, I assume by "vault" you mean some kind of sealed or enclosed space cut off from the Outside World. The demons won't be able to get in and don't know about the place. 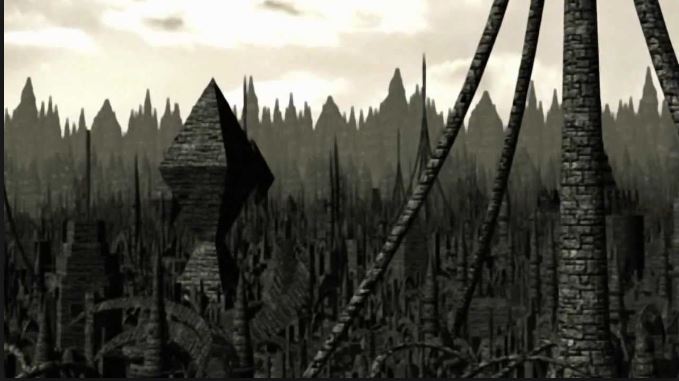 Depicted: the Mountains of Madness from my favorite Lovecraft story. The Elder Things put their city within a protective ring of mountains so high that only with a plane could the explorers get over them. Additionally, on the tops of these mountains were caves in which dwelt certain... sentinels. Game of Thrones uses a similar method to keep out monsters - a preternaturally high wall built by First Men, although instead of supernatural monsters at the top there are scruffy bearded dudes.

Your humans do not live in some dim cave, gnawing fungus and ranching crickets. They are like the Eloi, scantily clad beauties living in a green, paradisiacal valley, walled off from the demon world by the last herculean efforts of their distant ancestors. The humans do not cross the mountains either - whatever the ancients left on top works to keep in as well as keep out.

If you want your survivors to stay active, no vault could have that huge a food supply to help them survive. You are either looking at they hibernating, too, inside the vault or needing to get out of the vault from time to time as a search party looking for food. However, to not have an encounter with the demons this long on their food expeditions requires some answers you have to focus on. If you are looking at only the energy requirement of the vault, then you can buy the idea from the NASA rovers where they are dependent on the energy from sun. On days or extended periods where sun is feeble enough as an energy source, it could add another element of tension regarding the survival of the vault and the refugees inside.

Not the answer you're looking for? Browse other questions tagged survival alternate-reality urban-fantasy .

5
How do you keep magical creatures trapped in a closed village while allowing for expansion?
30
Would humankind remain the dominant species in a world with twice as big animals?
41
How would a society isolated by monster attacks get food?
2
Designing long-term, non-magical zombies
3
The Earth-like world's been shrouded by darkness. For how long would the civilization be able survive?
4
What could potentially lead to a AI/robot-driven post-apocalyptic world?
7
How Do We Protect Humans in a Zombie Society?
6
How can supernatural social beings avoid total extermination/enslavement when the human world has the Big Brother system?