I'm working on a earth-like planet with a much lower sea level (like 3000m so the mid-ocean ridge would form many islands) but is that even possible? Will the emerged ridge make some weird stuff and won't it prevent normal plate tectonics?

Yes, it should be possible. We even have a modern day example of what happens when the mid ocean ridge is above water level. It's called Iceland: 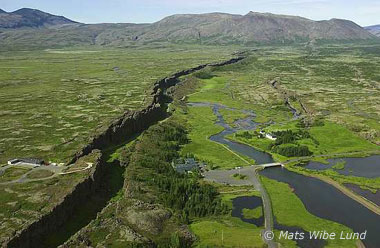 The magma that forms in mid ocean ridges is mostly derived from dry mantle, so the presence or lack or water on the ridge itself would probably not matter that much. In slow spreading ridges you may see something like the above in Iceland, but in fast spreading ridges you may have persistent lava pools or lava rivers along long stretches of the ridge. May look something not too different from the current Kilauea eruption, since both are basalts:

What you want to have is water in the subduction zones for plate tectonics, but since those are usually deep you shouldn't worry about not having any water there.

A interesting side effect would be the lack of interaction between fresh and hot oceanic crust with the sea water. This would mean that hydrothermal vents such as the "Lost City" and other will not form, or will be much less common. Some hypothesise that life initially formed on Earth at hydrothermal vents, so this may have wider implications for your world.

17
Asteroid impact. How big does it have to be to globally affect plate tectonics?
4
Is it possible for the oceans to freeze solid (at least on the surface)?
8
How much surface water do I need for plate-tectonics on a planet?
11
Defining a superfluid ocean
13
Where do hydrothermal vents form inside icy ocean worlds?
6
What is the crust of a habitable planet with Io-like heat-pipe tectonics made of?
2
Are my plate tectonics/land masses realistic?
3
Any advice on what is a realistic way to use plate tectonics to create landmasses and barriers?