In my story, a very small percentage of individuals develop superpowers (about 1 in every 10 million, if not less. There are about 200 billion people in this world). Everyone else in the world is entirely normal by human physiological standards, though this is a very advanced civilization (estimate around 2200 or so, mankind is now interplanetary.) There is an organization made up of these individuals and select normal humans who know about this, and the superpowers need to be entirely kept secret from the larger human population. The superpowers can develop spontaneously, and no activation trigger is known. This society is also very small in comparison to the larger world, though not as small a percentage as those with powers.

There are no dowsers- in other words, it's impossible for a powered individual to detect another one or the development of one. We're assuming that if, once in a while, a person (who's not affiliated with the organization, possibly because powers just developed) triggers abilities in public and it gets on the news or something, mankind is not stupid and will not just fail to notice these superhumans disappearing soon after they display activity.

How does the organization locate and retrieve all individuals who exhibit powers, without the public noticing?

Bonus question that's entirely unrelated: Find a name for a jetpack similar to the EXO-7 Falcon from Marvel, that conforms to the acronym H.A.W.K. and actually makes sense without making it sound like too much of a stretch. (So far, I have High-Altitude Wing-based _______...the K is hard...)

Dilution is the solution to pollution. 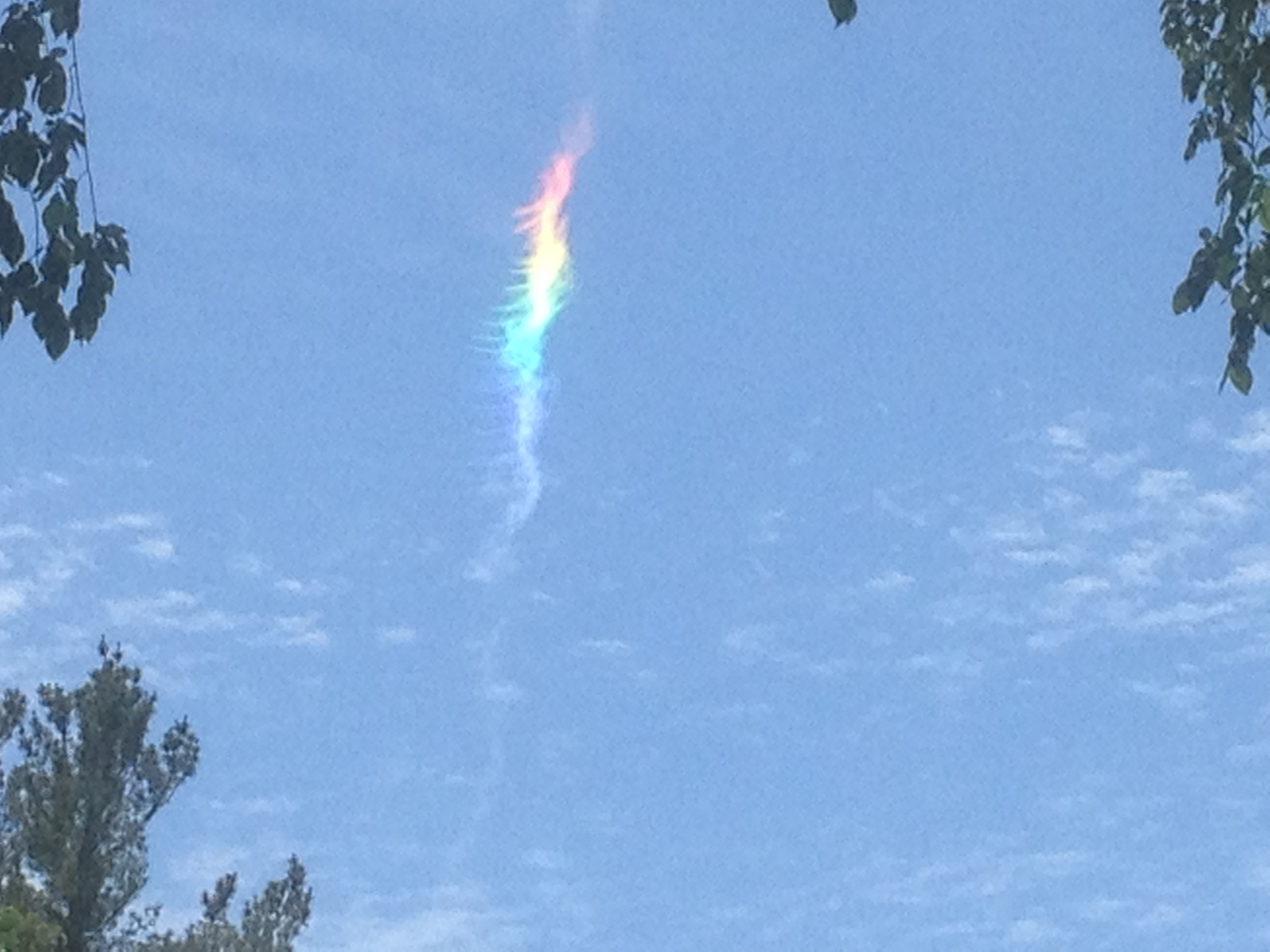 Here is something I saw last month. A cloudbow! An old man there said "I've never seen that. And I'm old!" Amazing and so rare. I was blown away.

Most people there were unimpressed. They assumed it was some sort of promotion for gay pride, or a special effect for some reason. People can be numbed by artifice to the point that when nature actually makes a miracle, they are unmoved.

So too your world. Amazing things happen all the time, usually for commercial purposes. Persons trying to sell things strive mightily to surprise and impress. The marketing angle is not always evident - maybe it comes later, or people who don't get it assume that they are not the people being marketed to. That is my thought when I see a billboard I dont understand, or a radio ad that makes no sense. To further disguise the occasional emergence of supers, the government arranges for additional unusual things to happen, perhaps even employing real supers. Mostly in the name of marketing. Some of it in the name of military or scientific testing; apologies (but not explanations) might ensue - like when the Navy accidentally crippled garage doors in Connecticut.

The populace of this future is jaded and numb. When a real teenaged super accidentally grows his eyebeams and blasts stuff before the super collectors can arrive and collect him, the Navy apologizes and it does not attract that much attention.

Side bonus: this would be fun fiction to write, since amazing stuff has to happen regularly to keep the populace numb and someone has to dream it up and make it happen.

Bonus: Swoop Machine Fly Suit. In Russian, where they stole it from.

You've kind of written yourself into a pickle. You say explicitly that there are no dowsers, yet, you want a dowser.

In general, if no biological component exists (like how you can detect certain genes) and if no power-ed option exists, in short, you wouldnt be able to detect them until it's too late.

I think you meant supers wouldn't be able to detect other supers in a broad sense. I think the only way to have any detection be possible would be through an ability.

Maybe someone who is clairvoyant, who can see potential disasters, and rush a squad in to intercept the new super before they manifest. Maybe someone who can share powers of someone else, and can therefore tell if someone is super based on new abilities gained. Or some kind of mind reader, or such who can literally sense it.

You've made it clear that no scientific way exists to identify them, so therefore it must be a supernatural way, or you'll have to write some new loopholes.

"the superpowers need to be entirely kept secret from the larger human population."

Compromise on this point, and encourage a few religious denominations to view these as miracles and proof of God's presence in our world. Leaders of those faiths who learned that this was a systemic phenomena could likewise ascribe the entire superhero thing to a vast plan of God to place guardian angels in our world to fight demons or something like that.

Diehard skeptics wouldn't believe, but might be convinced that these events are clever religious hoaxes, so they would spend lots of time trying to debunk them instead of trying to prove them true so they could get to the bottom of it.

This series of miracles might also trigger a religious revival that wins great support from previously apathetic non-religious types.

Your information is missing some important factors to answer your question:

1) How far is mankind spread out? How many planets are colonized? Do they occupy 10 planets with each 20 billion people? Are there any major population centers?

3) How accessible is interplanetary space travel? Can average person X just go to a market and buy a FTL spaceship for his savings? Does only the government own spaceships? How many are there? What is their size?

4) What method is used for interplanetary massaging? Is it accessible for the average person? Is communication only between planets only uphold by ships passing messages onto one another? Are there communication hubs?

5) Could the police or the organization get away with arresting people based on next to no reason? How far does the government already go when trying to control the people?

This question highly depends on how humans are organized and communicate in your future. Depending on these factors the answer to your question will be highly different and without them there are way to many possibilities to answer your question in a way that fits your world.

So the first one is easy. Have a super who can some how know where other supers are. This could be his sole power (Caliban from X-men) or part of a better power (there was discussion on this exchange about a character using his power to "always be right" to find a person no matter what).

Given this is 2200 and there could be a way to convert the superpower to a digital signal, it could work. You probably have FTL, so this is not out of the realm of possibilities.

As for the other one, look up Acronym Generators.

Not the answer you're looking for? Browse other questions tagged science-fiction super-powers or ask your own question.

34
What would be the fastest way to end hostilities with the USA (without surrendering) for a superpowered being?
17
Organisations secretly employing super-powered humans - how can they afford to give everyday freedom to their members?
5
How to keep a peasant army relevant in a setting where individuals can train to be superhuman?
10
How can a superpowered being avoid religions being created around itself?
37
How do I keep the government from detecting my flying car?
8
If a superpowered character tried to run by kicking away material in what rotational direction would they spiral out of control?
6
How would people in the 1920s-1930s explain or rationalize superpowers?
1
How can I expand the definition and some specifics of pyrokinesis?