climate and behaviour of a gaseous ocean

Following up on my last question about the ecology of my skyworld here, I decided to go more in-depth and fundamental. This is going to mostly be about the behavior of the ocean and changes to the climate of the world after the ocean is introduced. Assume that the ocean is dense enough to mostly remain pooled and the tendency of gas to mix and diffuse is handwaved. My world pre-drowning would be fairly similar to Earth and have similar atmospheric circulation, average temperature, etc as Earth. 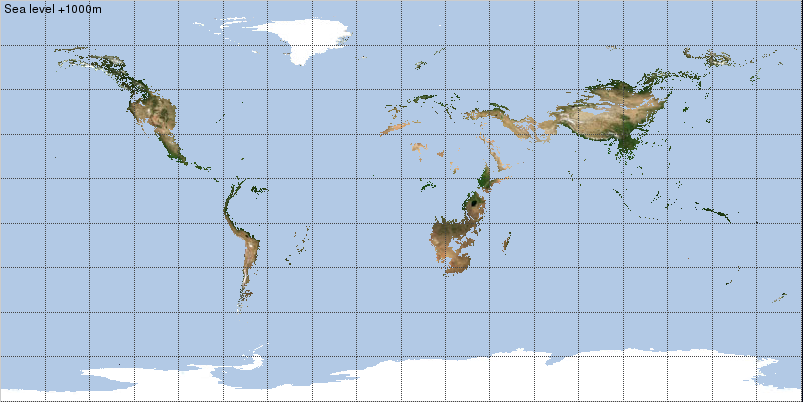 This image from calculatedearth of the Earth's landmasses submerged to 1000 meters would be close to how my world looks. A few questions:

Edit 2: For the purposes of this question, I suppose it would be better to consider simple ground fog (the kind we have on Earth) as the gas (or aerosol, actually) that covers the land. It would probably be easier to predict the effects knowing more about the substance. My only concern is that fog doesn't seem to displace air, and the depths being anaerobic is an idea I had been considering. If the aerosol particles are suspended in a denser gas/mixture than air, would that displace the atmosphere?

Given the time differential it could be argued that everything under the fog simply freezes solid within a few hours.

Not the answer you're looking for? Browse other questions tagged science-based weather .

8
Is there dense, non flammable gas that I can cover the Earth in?
2
What would the ecological effects of a worldwide ocean of fog be?

6
Can Humanity use intentional climate change for good?
1
Constantly sunlit/shadowed regions and weather
2
What rough climate and/or biome classifications would I assign to a planet with 31.1 degrees axial tilt?
11
Determining climate and biomes in a non-planetary setting
2
Equatorial or Meridial Ocean
5
How to get rid of the rainforest for a desert moon with only habitable poles?
2
How To Approach a Range of Albedo in A Given Latitude Range When Estimating Temperature?
5
If the Earth is completely covered by mirrors, how quickly does it freeze?
5
What would climates look like on a world 1°C?
3
How would the rings around a planet affect its climate?