Could Cobalt bind to nitrogen the same way iron would to oxygen in an alien respiratory system? 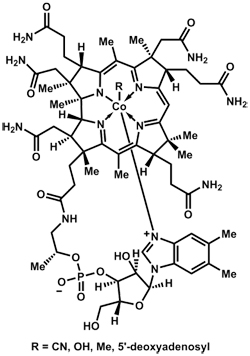 B12 has at its heart a cobalt atom bound to 5 nitrogens and one something else. The structure of B12 has a vibe reminiscent of hemoglobin with iron or chlorophyll with magnesium, and a B12 type molecule with a cobalt heart could definitely function as a NH3 carrier.

Nitrogen is a terrible gas to breathe. A molecule of nitrogen is two atoms, triple-bonded together. If you want to use nitrogen for respiration, you need to break that bond so the nitrogen atoms can react with other molecules. However, this is an extremely strong bond: one of the strongest in all of chemistry. You have to put in vast amounts of energy to break that N-N bond.

The amount of energy you need is exactly the same as the amount of energy that's released when that bond forms. Most modern explosives (e.g., TNT, RDX, etc.) work essentially by having a bunch of nitrogen atoms in a molecule. When you poke it, the molecule rearranges itself so that the nitrogens come together and form triple bonds with each other to make nitrogen gas. A large fraction of the energy from the explosive comes from the formation of those N-N triple bonds. This is the energy you'd have to put back in to break the bond.

So, although it's not literally true, a good way to think about this is that respiring with nitrogen would require you to "un-explode TNT", putting back most of the energy you got from exploding it in the first place. And respiration is supposed to give you energy, not consume it!

While it is true that N2 requires a lot of energy to dissociate, it's not impossible. On Earth, legumes have bacteria that fixate N2 into other compounds. Your planet could similarly have organisms that use the energy in starlight to fixate N2. In fact, the high energy required could be what drives metabolism on your world.

You don't need to bother with a carrier molecule. N2 is very soluble in ammonia (0.1124 vol/vol). Source: https://pubchem.ncbi.nlm.nih.gov/compound/nitrogen#section=Solubility

A few other tidbits that may be useful for your world:

I suggest the name "Amina" for your planet.

Indeed, had Earth been colder so the water froze and ammonia instead became the oceans, life could have evolved in this manner.

tldr; I think that, on an anaerobic ammonia-ocean world, hydrogen is probably the best choice for a respiratory gas.

Why we breathe oxygen

Here I chose the most common non-organic form in an aerobic environment with water, although in the presence of water the acids and bases will dissociate, forming stable ions and releasing even more heat. In all of these cases, the enthalpy change $\Delta H$ is negative, meaning that the product has less enthalpy than the reactant, so heat is released and the reactions are exothermic. Another way to say this is that all of these chemicals burn in oxygen.

This is remains true of more complex compounds formed from these elements, including some oxygen. Carbohydrates, proteins, fats, nucleic acids; everything life is made of burns in oxygen. This is exactly why we can get energy from food by combining it with oxygen.

But if oxygen is so reactive with everything, why do we even have it in the atmosphere?

As mentioned in at least one other answer, the presence of molecular oxygen on a planet, in combination with these other elements, is a good sign of the presence of life, because over geological time, the oxygen would react with the rest of the planet. In the case of Earth, oxygen is produced by photosynthesis, which takes energy in the form of sunlight and converts it to energy in the form of oxygen + fixed carbon. We tend to think of the fixed carbon as the energy source, because that it the part that the organism holds on to, and oxygen is everywhere "for free". But there is nothing inherently energetic about glucose; it's only a store of energy because there is oxygen to combine it with.

For the rest of the discussion, I have completely left out oxygen and oxygen compounds. Of course, oxygen is a perfectly fine respiratory gas on an ammonia world! Water would be a mineral, though one which was not particularly rare, and which was quite soluble in ammonia. But, it is clear that you are looking for something different, so we will assume that none of the biochemical processes on your planet are energetic enough to break down water. (Although, some oxygen-containing organic compounds, such as alcohols, should still be possible.)

The problem with nitrogen

As other answers have stated, nitrogen is just not as reactive as oxygen. It's hard to even think of the equivalent reactions with nitrogen instead of oxygen, because they aren't stable on Earth, with one exception:

Cyanogen and Hydrogen cyanide would be liquids on your planet. Hydrogen cyanide is a weak acid with (aqueous) $pK_a$ and density extremely close to that of ammonia. I suspect it is soluble or even miscible in ammonia, but I am not sure. Cyanogen is probably less so.

Phosphorus mononitride is a gas found in the atmosphere of Jupiter, but there's no properties listed. Based on its presence in Jupiter's atmosphere, I assume it is stable with respect to $N_2$ and solid $P$ (or it would decompose into them) and that it is a gas at liquid ammonia temperatures.

Hydrogen cyanide is an interesting candidate for an oxidizing agent in your world. It reacts with a wide variety of organic compounds to produce energy. However, this process doesn't really break the compounds down; rather it attaches even more cyanide groups.

Hydrogen to the rescue

In most of these reactions, hydrogen is a reducing agent, rather than an oxidizer like oxygen (but it is an oxidizer in the last 2).

Furthermore, more complicated organic molecules can also be broken down by hydrogen for energy profit:

Importantly, hydrogen is a gas at the low temperatures of an ammonia world. However, you will need a big planet with a strong gravitational field in order to hold on to it; this will mean high surface pressure, and apparently hydrogen is quite soluble in ammonia at high pressure. Fortunately, hydrogen is the most common element in the universe, so any planet large enough to hold on to it usually has plenty.

See also some other discussion at the question about that, although I obviously disagree with the accepted answer.

1: All values from the respective compound pages on Wikipedia. I used enthalpies instead of Gibbs' free energy, which would be more appropriate, because most compounds didn't have Gibbs' free energy listed. Gibbs' free energy could in principle be calculated from the enthalpy and entropy, which was given, but I couldn't find entropies for the free elements. Additionally, all of these are at standard temperature and pressure, which is not exactly relevant to an ammonia world. In most cases the signs should be the same, but if you really want to be hard science fiction, you could try to figure out the corrections.

N2 is a stable low-energy compound. It will be produced, so there must be a way to remove it as part of the cycle. If you want it to replace O2, it's natural to want to do it with photosynthesis. This may be an issue, because if it takes high-energy ionizing radiation to do it, that could continually mess up the other compounds and catalysts needed for life.

Maybe it could be done in steps, that each can be done with lower-energy light.

Probably the ammonias would be bonded to something like we use acetyl-CoA instead of just acetate. Four reactants at once doesn't look plausible either, but diimide is the end product I want.

So you go from something totally unreactive, to something very reactive with a double bond that can be broken later.

I expect a real chemist could show why this is not workable and suggest something better. But the fundamental idea is right. You start with an energy source and convert N2 to something that has more energy. And later when you want to use energy, you take something like ammonia and pull off the hydrogens to stick them onto something else, and get low-energy N2 back. For example:

In short: absolutely no.

And you're missing the point of oxygen:

Oxygen is an atmospheric pollutant on earth. No planet could ever have oxygen in its atmosphere without life. Life creates it and everything reacts with it eventually. If you ever found oxygen with a telescope you found life on a distant world. The word oxidation is called that for a reason: It is oxygen's ready ability to "react" to break up hydrocarbons in the body that gives it its value as fuel. And it is fuel.

Conversely nitrogen is not an atmospheric pollutant - it is common throughout the universe as is hydrogen and CO2 and it is a very inert gas and has no value as an oxidiser. So it has no fuel value. Using ammonia only "seems" plausible because of its behaviour at low temperatures resembles water (to a small degree), but if you put it under analysis the equivalency between ammonia and water is merely a facade: water has far more properties than ammonia.

It is for these reasons that is is considered there is literally no theoretical possible substitute for water/oxygen in terms of life in terms of the astonishing solvent properties of water and ionic bond handling and oxidation energy recoup of metabolising via oxygen.

Ammonia Silicon based life forms (organic life forms) are genuinely being revealed as complete non starters (on a level with using plutonium/helium/throws dart at the periodic table), and died as a source of hard science fiction along with the Drakes Equation in the 70's and 80s'

Not the answer you're looking for? Browse other questions tagged reality-check biology creature-design chemistry biochemistry .

15
An ammonia - not water - based alien race that breaths hydrogen. Is it believable/possible?

6
What types of lifeforms might this cold world have?
7
A different kind of atmosphere, what gasses other than oxygen could be used by alien life forms?
3
Could our biochemistries allow us to interact in any meaningful way with alien life that was based on other biochemistries?
10
Ammonia planets
5
Ammonia planet- atmosphere
11
What would be the human physiological reaction to an alien biosphere?
8
Greenhouse Effect Strength- Ammonia World
5
How should the human respiratory system be changed to be able, in addition to oxygen, to breathe chlorine or hydrogen sulfide?