252 million years ago, the worst event in the history of life on Earth occurred. 70% of all terrestrial species and 96% of all marine species became extinct through, according to geological records, a combination of events--flood basalt eruptions in Siberia, runaway greenhouse effect caused by the melting of methane ice, even the formation of the supercontinent Pangaea itself.

In an alternate Earth, a reverse Great Dying occurred, one in which 96% of all terrestrial species and only 70% of all marine species became extinct. What combination of factors would create such specified damage?

Just a reminder, this question does not ask how long life would recover, who would fill in the vacant niches, etc. The question is what would cause an extinction event as described in the paragraph above. It doesn't matter when it happened. 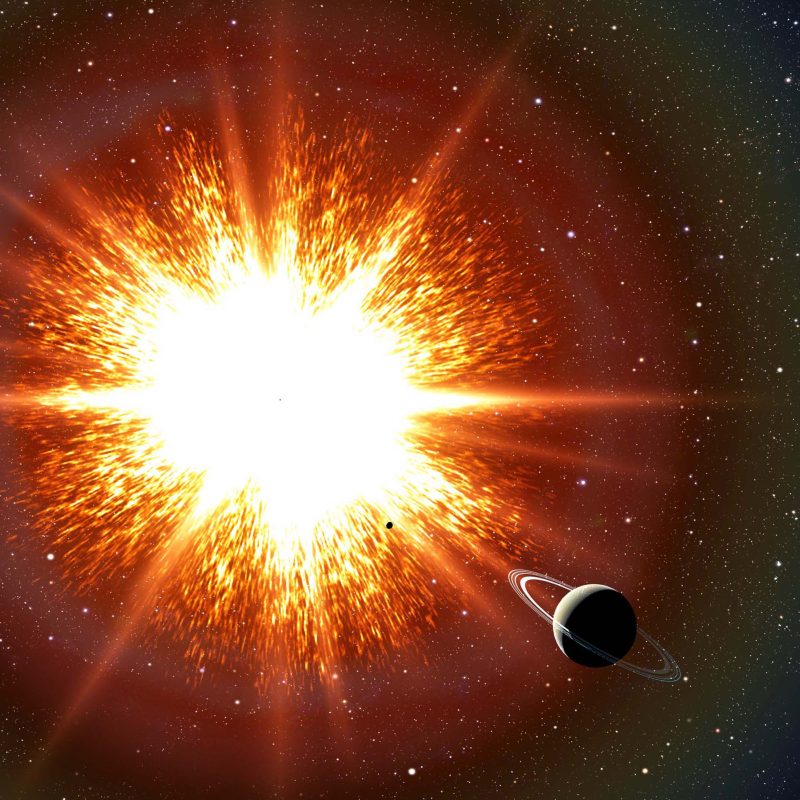 The explosion of a supernova close (few tens of light year) to the Sun would bathe the Solar System in a shower of highly energetic gamma rays, which are lethal for life. Moreover, stripping over the ozone layer, it will allow also radiation from the Sun (UV, X-ray, gamma ray) to easily reach the surface.

Being shielded by water, the organisms living immediately after the surface layer would get a better protection from such shower, thus explaining why there is an higher mortality on land than in water. 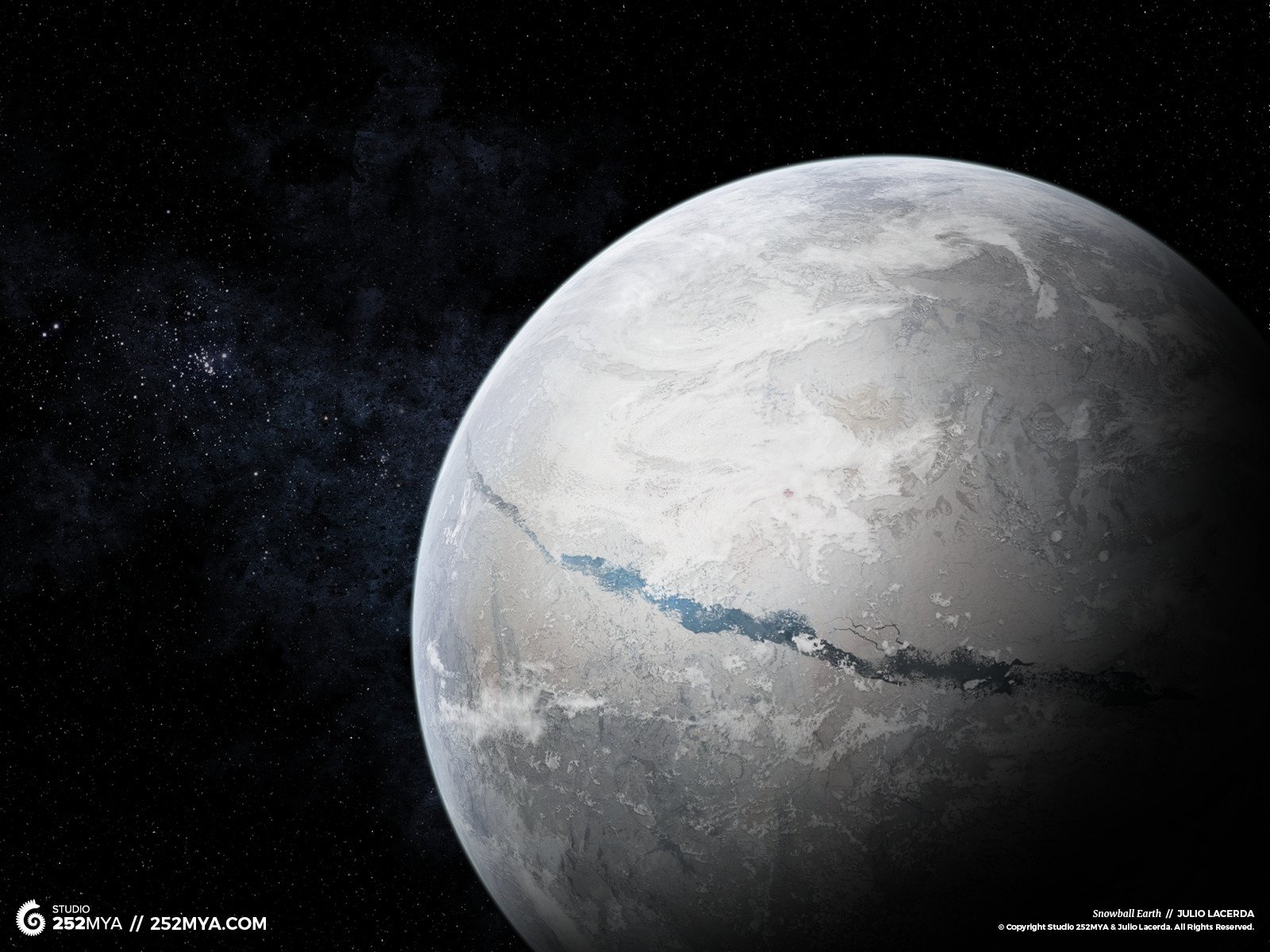 The Snowball Earth hypothesis proposes that for a period during the Precambrian, the Earth froze over entirely or almost entirely.

The Snowball Earth hypothesis proposes that Earth surface's became entirely or nearly entirely frozen at least once, sometime earlier than 650 Mya (million years ago). Proponents of the hypothesis argue that it best explains sedimentary deposits generally regarded as of glacial origin at tropical palaeolatitudes and other enigmatic features in the geological record... A number of unanswered questions remain, including whether the Earth was a full snowball, or a "slushball" with a thin equatorial band of open (or seasonally open) water.

For this answer, the Snowball Earth event occurs instead of the Permian extinction, as stated on the question. There would be a thin band of open water at the equator (as in above image). This open water would act as a refuge for the 30% of aquatic species surviving the event. On the ice covered land only 4% of species survive: land based insect scavengers of dead fish washing up, and specialists eating snow algae.

How would the Snowball Earth come to be, you may ask? Just as with the Precambrian one - the earth cools because of volcanic winter or some similar event, new ice increases the earths albedo and reflects away heat, and runaway cooling ensues.

But how, you may ask, will the Snowball Earth ever thaw? In my proposed scenario, giant burps of volcanic CO2 and microbially-produced methane from the ocean floor increase the greenhouse effect and the earth melts.

Global warming associated with large accumulations of carbon dioxide in the atmosphere over millions of years, emitted primarily by volcanic activity, is the proposed trigger for melting a snowball Earth. Due to positive feedback for melting, the eventual melting of the snow and ice covering most of Earth's surface would require as little as a millennium.

A much less lucky meteor strike.

Here's the thing with the K-T extinction event, which is most famous for having wiped out most the non-avian dinosaurs (and actually wiped out most of the avian ones, too: today's birds are descended from no more than five species that survived the strike).

It could have been much, much worse for land animals.

Here's a map I made of where the meteor hit, with images from this website:

It doesn't seem very big, does it? And in relation to the continent, it isn't. It also happened to hit a relatively benign spot, geologically speaking - that shallow area, which would become part of the Yucatan Peninsula, was mostly a centuries-old tropical reef and the porous limestone it had formed.

Now just imagine a slightly larger meteor hitting harder continental rock, like the granites of a mountain chain. The K-T event killed off about 70% of marine species because species living at lower depths were the least affected by its worst effects - turning the atmosphere into a huge oven, killing off the food chain by blocking out the sun, etc. With a larger meteor hitting harder rock, that advantage doesn't change.

However, that slight change in luck makes it that much harder for land-based species. A larger meteor hitting continental rock is going to throw even more mass into the atmosphere, blocking the sun out for even longer, and continuing to bake the surface for longer as it rains back down.

It's very likely, and it's all it takes to wipe out life in the ratios you're looking for.

You need to cool the atmosphere without poisoning the oceans. Oceanic life can survive simply cooling better than terrestrials, water is an excellent insulator. What nearly killed the oceans during the Great Dying was sulfur depleting the oxygen from the water. So to cut light without pumping sulfur into the atmosphere you need smoke, lots and lots of sooty smoke over an extended period of time, hitting a large forest with a meteor would be a start but I'd suggest that you actually want to burn a lot of relatively clean coal with very little oxygen. Coal seam fires can potentially pump out smoke continuously for centuries, probably longer. If you have a reasonably large meteoric impact that burns large areas of forest that's growing on shallowly buried peat and coal deposits then the fire could take hold in those buried carbon deposits. Partial combustion of the deposits, due to poor oxygenation, will pump sun blocking smoke into the atmosphere for years afterwards cooling the world and killing land-based lifeforms rapidly and the oceans slowly, the effect will be enhanced on a super-continent as smoke and fire blankets the continent while leaving the oceans relatively clear.

2050: The ancient enemy of man, genus Plasmodium is driven to extinction. The apicomplexan vestigial chloroplast proves to be a fine therapeutic target.. Even the hypermutable plasmodium cannot out-evolve the synthetic virus targeting its chloroplast. Malaria is eliminated as a human disease.

2055 Crop failures are noted in central Africa, followed by similar failures in central and South America. It is realized that not just the crops, but all plants are dying. The synthetic virus has mutated, and all chloroplasts are now potential hosts.

2085 Green plants are gone and with them all terrestrial vertebrates and most insects. Green algae are not far behind.

Outside the growing reefs, the oceans are now ceded to cyanobacteria, which also colonize the empty land. Within a few decades, oxygen levels begin to rise once again.

The few terrestrial survivors are the fungi which made it through the lean years and soil / detritus dwellers like earthworms and sowbugs. Ocean life does better thanks to the coral reefs, although survivors are heavily skewed towards sessile organisms with photosynthetic dinoflagellate symbionts and (as on land) acorn worms and similar hypoxia-tolerant dwellers in the subsurface.

Not the answer you're looking for? Browse other questions tagged science-based natural-disasters alternate-earth extinction or ask your own question.

20
Escaping a dying planet
6
Great Flying Cthulhu
8
How do I justify viral zombies not dying out?
19
AIDS vs Great Plague in medieval period
4
Extinction Equilibrium: 50%
8
The Great Oxidation Event…Artificially Imposed on a Tharn-Like Alternate Earth
4
Could Sharks Survive a Longer PETM?
5
People dying and respawning, would it increase their pain tolerance?