Building a planet with a primordial black hole core

I have been trying to figure out a way of explaining how an advanced society some time in the past built an artificial planet with a black hole at its core and the effects that would have on the people. This black hole would be used as both a power source and garbage disposal. I realized that it could not be a very large black hole so no solar mass sized black holes.

The big issue here lies in determining the mass of these black holes. On the one hand, the traditional primordial black holes you mention - formed by density perturbations - occupy a relatively low-mass regime. Constraints from a variety of observations indicate a peak in the mass distribution at $\sim10^{17}\text{ kg}$ depending on the conditions at the time of formation, as well as the behavior of inflation. These black holes should still be around today, even if Hawking radiation had dissipated them. 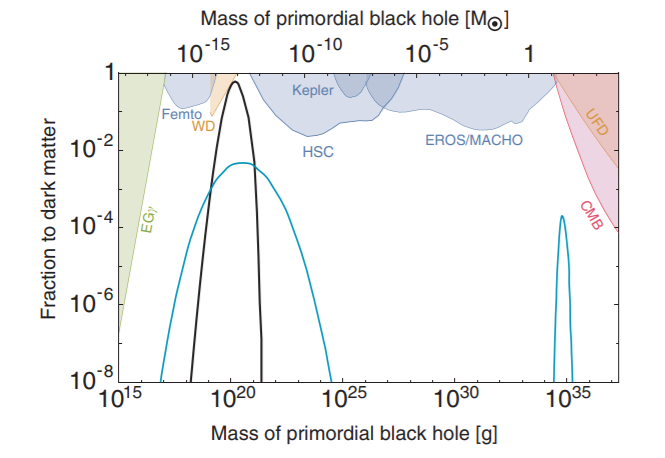 Figure 3, Primordial Black Holes in the Inflationary Universe, Masahiro Kawasaki. A plot of the primordial black hole mass distribution, with various constraints shaded out. Notice the peaks. I should note that new constraints are continuously being added; see, for example, a recent press release from the Subaru Telescope.

On the other hand, it has been suggested that black holes of a few tens of solar masses could make up the dark matter we observe - a variant of the Massive Compact Halo Object (MACHO) hypothesis, and primordial clouds of $10^{4-5}M_{\odot}$ could have collapsed to form black holes. If we take both populations into account as "primordial", we have an enormous mass range to consider.

At the lower end, we see black holes with Schwarzschild radii of a few tenths of a nanometer. At the upper end, we find Schwarzschild radii of 46 Earth radii. To have a radius of, say, 10% of Earths, we have to limit ourselves to about $200M_{\odot}$, possible from the collapse of a low-mass Population III star. However, this is still going to pose problems for your planet, and much of its interior could be accreted on short timescales. Therefore, I suggest staying with the classic primordial black hole formed via density fluctuations, with a much nicer mass of $10^{17}\text{ kg}$. After all, we don't want to swallow the planet!

To be honest, on the surface of the planet, there shouldn't be major effects from time dilation or the extra mass of the black hole. Of course, don't take this as an endorsement of the scheme; you've still got a black hole at the center of your planet, and that rarely turns out well.

Let’s go with a black hole with the mass of the Earth. Such a black hole could survive from the Big Bang to the present day, and that the artificial planet has a mass of 1 Earth mass. In such a setup, gravity would be double on the surface, and the planet will last for an astronomically long period of time, before being either sucked in or sent out into space. The black hole will produce massive amounts of energy as it grows, decelerating the rate of matter’s entry into the event horizon.

The heat will increase the rate of tectonic activity, so there’d be more earthquakes and volcanic eruptions, but more geothermal energy to use. Long story short, such an investment will create a very volcanic world, but will provide lots and lots of energy for billions of years.

29
5km artificial planet, with same gravity as on Earth
11
What exactly would happen if a black hole was introduced into the sun?
1
How large of a moon could an earthlike planet possess

10
Reasons for time dilation to happen on a habitable planet with same g force and not orbiting a black hole
5
Is a "Partial" Black-Hole Possible?
7
Is there a safe but weird distance from black hole merger?
4
What size of black hole is the safest?
2
Possible uses for time dilation in the ergosphere of a black hole?
3
Black hole at the center of the planet
2
Could an evaporating micro-black hole serve as a useful weapon?
6
How long could a planet or moon survive if it had an Earth mass black hole within it?
3
How would a high escape velocity effect conditions on a low gravity Birch planet?