So here is my proposal for a fictional place I call Mozart city. As could probably be deduced from the name, Mozart and his family run the place.

Mozart and his family

That is a lot. I think that in order for Mozart to achieve all this every day, his home has to be in the same building as the mayor's office.

The city is 50 miles in radius. That is the average daily distance of Mozart's horse. Starting from the outside, it is mostly residential. Then in the middle, there are stores and restaurants. Grocery stores, knitting supply and pattern stores, music stores, bookstores, and restaurants make up the majority of this commercial sector. Then as you get closer to the center you have concert halls, homes of musicians, banks, a few factories(mostly for producing money that is circulated), a composer meeting hall, and then finally, smack dab in the center the mayor's office/Mozart's home.

I will draw a map of this city if you want me to. But it will take a while. But is a city like this plausible(circular shape I think would make it harder to design to be functional)?

You can have a 25 mile journey each way to get from the residential area to the shops. If you want to catch a concert, it's even further.

Everything is too far apart to be function without some sort of public transport. The poor don't have horses so how can they get to the shops?

You can't separate everything out into rings. Shopping areas and entertainment must be dispersed throughout residential and industrial areas because most people need to be able to get there and the majority of people need to walk.

If it's not walking distance, it's not viable.

The city is 50 miles in radius. That is the average daily distance of Mozart's horse.

Cities with circular layout have been attempted in the past, and soon the attempt was abandoned.

Look for example at Karlsruhe, in Germany. The story goes that Karl III, margrave of Baden-Durlach, during a nap dreamed of this city and the sun, and gave his architect the task of designing it.

The original layout was to have the castle in the center and then roads departing in all directions as light beams, to emulate the sun. 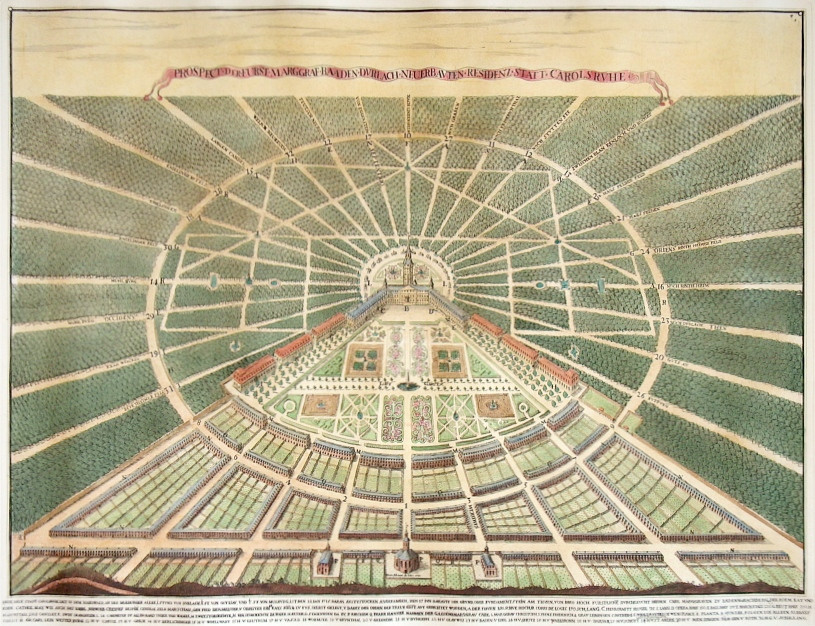 Well, the idea was quickly abandoned in favor of the square-ish grid layout it has today. 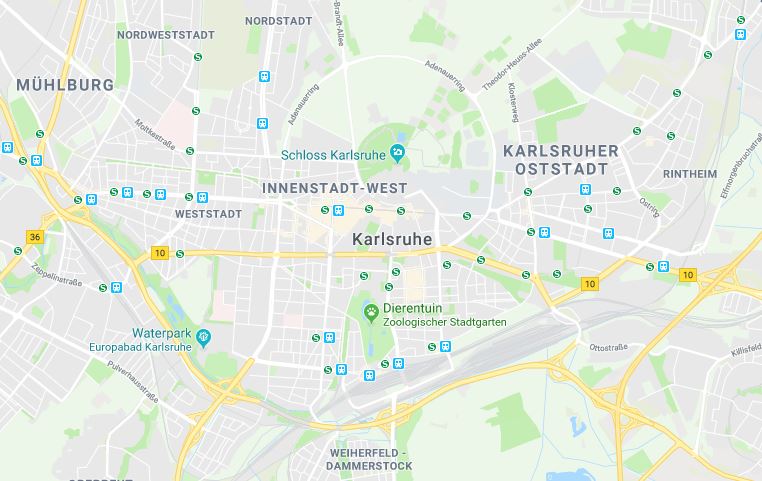 The castle park you see in the drawing is really a walking distance from side to side, 100 miles like in your case would add too much struggles to make the city "rational". Just to name one, once in a while you have to start a new road somewhere, to compensate for the increasing distances between two adjacent ones.

8
City Design: Freefall
10
Growing a city (literally)
11
How big could a city possibly get?
4
An underground city beneath another city?
4
City-Closing Event
9
Underwater city sanitation
5
How to hide a city?
4
Dusty city living