Our hero is a normal teenaged boy, living in north central California. Somehow he gains the ability to manipulate heat. My original plan for his origin was a "freak snowboarding accident involving a flamethrower", but that is just embarrassingly unbelievable, and I'm having a hard time coming up with ideas.

Having heat manipulation powers means he can:

It can't be too obvious that whatever got him his powers gave him powers, because he needs to have a secret identity.

He didn't get powers on purpose (probably wasn't given them on purpose either, though I guess that's an option)

I am hoping for something besides radiation exposure, being born with it, magic, or having his DNA modified with a specially made virus.(These are going to be used for other people, and I don't want things to get repetitive.)

Obviously this isn't actually possible, so I just need something that seems mostly plausible (insert more suspension of belief).

This would be in an universe mostly like ours except there are superheroes.

(I'm thinking about making his code name "Thermal". Any thoughts?)

Going to cannibalize off an older answer of mine:

All Power are Psychic

Let's say that superheroes in this world are all tapping into some sort of extra-normal energy source. Dark Energy, Zero Point, direct mass -> energy conversion of cells - they're doing something to create "superhero" effects.

But now you need to account for why one superhero can control heat, and another can fly and lift a llama, all using the same power source. And the answer is that it's in their mind. In your case, Thermal can control heat because when he had his breakthrough and gained powers, that's what he needed to do. So his powers end up being expressed as heat control and vision, instead of as super strength or toughness.

So for your creation event, anything heat or cold related will work. Maybe he was trapped in a house fire and miraculously survived, or fell into a freezing river and came out ok 10 minutes later. Those are events that are in the realm of possibility - you hear about freak survival cases every so often - but they could have ignited his powers.

What's plausible in your universe really depends a lot on the origin of the rest of your superheroes' powers. The following answer works best in a world somewhat like Marvel's X-men where some superheroes have fantastic mutations that are used to explain their powers, with the precise mechanism of the ability being left unexplained/handwaved.

In real life, animals do show acclimatization effects as a result of exposure to cold. You might have these powers be presented as an fantastic extension of this phenomenon. It's controversial to what extent humans can acclimatize to cold conditions in real life, but there has been some research; here is a review from NASA of research on human cold acclimatization. So, maybe you could have these powers be latent in the genome of this character, then activated when he becomes exposed to the elements for a long time in a snowy environment, and undergoes a near-death experience of hypothermia.

It can be done via magnetic effect: 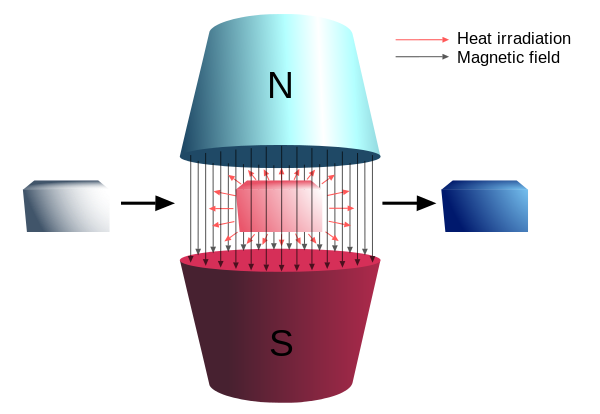 Magnetic refrigeration is a cooling technology based on the magnetocaloric effect. This technique can be used to attain extremely low temperatures, as well as the ranges used in common refrigerators.1

This means that your hero should be able to generate strong pulsating magnetic fields around him. Lets say that he suffered a change to his blood cells (iron based) that allows him to create magnetic field. As an excuse to why he does not outright uses this magnetism to manipulate ferromagnetic material (a la x-men's magneto) you may say that he does not know how his powers work yet.

A specific kind of Magnetic refrigeration called nuclear demagnetization works on any (even not magnetic) material.

To allow heat to be generated, intead of creating a pulsating field, he should generate alternating fields: 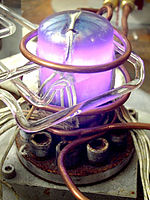 In induction cooking, an induction coil in the cook-top heats the iron base of cookware. Copper-bottomed pans, aluminium pans and other non-ferrous pans are generally unsuitable. The heat induced in the base is transferred to the food via (metal surface) conduction. Benefits of induction cookers include efficiency, safety (the induction cook-top is not heated itself) and speed. Both permanently installed and portable induction cookers are available.2

but this has the side effect of only working on metals.

This sounds like something that would be more believable if you used extreme cold over extreme heat, mostly because most people understand that something hot will kill you really bad, but not that something very cold will do the same.

Perhaps you could do an accident with liquid nitrogen or the like. It's probably not bizarre enough that it will be unbelievable, but still sound awesome enough to be considered reasonable considering the genre.

Maybe your superhero to be and one of this friends get inside a lab to play with the devices, and they somehow spill a container of liquid nitrogen or another kind of supercooled material over him. And then the friend tries to save him by trying to quickly heat him back up (either by applying a flame or moving him inside some kind of oven or using some other weird experimental device that sucks the heat back out) and this results in getting the powers.

Our hero is a free-lance HVAC repair man. He's working a faulty thermostat when a nuclear holocaust hits when bam 120,000 BTUs are now fused with his body and at his disposal.

Your super-hero is breaking the laws of thermodynamics regarding the entropy. Coolest way would be to survive a blast in Large Hadron Collider but that is in Europe. Luckily, Lawrence Livermore National Laboratory in in his area - can he be some intern there?

Alternate name could be "Entropy man"

It's fairly common in fiction to have an overarching framework where certain people (whether that's genetic, random, from an external source, or whatever else - or maybe it can happen to anyone and few people have suitable incidents) have the potential for power and it's "activated" by an incident along the lines of your "freak snowboarding accident involving a flamethrower". Or maybe the incident drew the attention of some higher power.

I think the reason it's so common is it's the best of both worlds - you have a single framework for everyone, that takes care of all the physics-violating stuff (plus you don't have a case where some powers are psychic and others are magic and one trumps the other, unless you want to), but each individual character has their own origin story. The reason he could get powers is the boring "born with it" / "magic" / whatever (which doesn't get repetitive because you don't have to dwell on it all the time with every character), but the reason he got powers, and the reason he got those powers, is unique to him.

It also means you don't have to have the incident itself be something that can plausibly (or "plausibly") explain superpowers, so you're not stuck with supernatural explanations or else unspecified radiation/chemicals.

Maybe he's just using more than 10% of his brain.

This sounds a lot like Maxwell's Demon. So you could make the theoretical demon a literal supernatural entity that has possessed or merged with the character.

Maybe the demon was summoned by a villainous character, and just barely escaped. In its weakened state the demon (which, despite the name is not evil) hid to seek refuge. And your character somehow fits the bill. That could introduce another antagonist as the original summoner recognizes your character's new powers.

You could integrate that with your original idea; the hero thinks his powers came from the freak volcanic plume (better than a flame thrower, and potentially containing all sorts of weird chemicals) that he snowboarded into. At least until the dormant demon starts to recover and awaken...

Nano technology that re-engineers the body including growing of the new organs needed for heat control is once possible solution. As this is similar to a designer virus you may not find it acceptable. The problem I see is the justification. A couple of possibilities.

1) Designed tech that has mutated from a different purpose. E.g., designed for heat resistance that modifies body proteins to delay breakdown under heat, but mutates to confer heat control.

2) Alien tech that somehow affects your hero. Perhaps it served a different purpose originally, but allows heat control for a human

3) Designed tech to enable heat control. Perhaps mad scientist time that uses your hero as a test subject (perhaps without his knowledge). The mad scientist can die before sharing the design with anyone.

I should add that even with changes such as these, you still need an element of the fantastic because interesting uses of such special powers will require more more energy manipulation than any possible biologic function, unless those biologic functions can also somehow manage nuclear interactions as well, e.g., catalyzing a fusion reaction from hydrogen to helium and safely harvesting the energy for use in heat control. Of course, this would also be a neat trick.

I don't know about moving heat, but seeing and generating it would be interesting.

We all produce heat, and our bodies let off infrared light. If you had an IR camera you could see someone in the dark.

So the guy is out snowboarding, loses control and smacks his head. This causes some damage, and his brain heals itself by routing around damage. As brains will do. Because how how the brain routed around, he started being able to see into the IR spectrum, to see how warm and cool the surrounding area is.

He also became able to control his own body heat, and with practice was able to focus the IR light coming from his body, to make a heat ray.

You could also say that if he's able to control his own body heat, he'd be able to move it around, so hold two glasses. One hand gets really hot, and one gets really cold.

This is if you don't want to go full on psychic with the origin story.

Edit: Also, because he can control his IR emissions, he doesn't need his remote control any more...

Go with your original idea. The complete abandonment of pretense would be refreshing.

Not the answer you're looking for? Browse other questions tagged energy super-powers or ask your own question.

13
Is it possible to make a logically consistent set of laws that produces physics similar to that in superhero comics?

4
Energy manipulating superhero — how would it work
11
How to make a superhero with electrical powers fly?
4
How efficient would a rubber superhero fight?
19
How would a superhero who needs to fall asleep to use his powers fall asleep during battle?
3
What type of mechanics/required secondary powers would be needed to explain how a superhero might use pyrokinetic flight/propulsion?
3
Could a Superhero with radio wave powers hear the radio?
3
Is there a way to trap a super-being like Dr Manhattan?
4
Required Secondary Powers/Realistic Implications for a Person That Can Control Darkness