It is supposed to be a heavy material, twice as heavy as your average steel. In its immutable state it is completely chemically inert. It does not expand when being heated to any temperature and does not get brittle when cooled. No impact can deform it, it will only be accelerated as a whole. $F=m\times a$

It has the limitation that the material needs to have a minimal thickness of about 1 milimeter to be perfectly immutable. It does not have to fulfill this requirement everywhere, but every position (including edges) needs to be directly connected and close to a portion that is sufficiently thick.
This means you can have thin (or even sharp) edges, but they need to be extending from sufficiently thick part and can't be long.

Would this material be superior to traditional materials for armour in a roughly medieval setting?

The classical problem of armour is weight. This would still be the case with this material as your entire armour could be a sheet of 1mm steel, which is just slightly thinner than medieval plate armours (1.5-3mm).

Another issue I see is heavy impacts. The reason modern cars are not as rigid as cars were 50 years ago is that they can absorb a significant amount if the impact with the crumple zone and also that the acceleration is not nearly as strong on the person.
With the old rigid designs you are bound to die in a high velocity accident, even if your car wasn't deformed at all.

Of course, the forces that tend to work on soldiers are usually significantly lower than on drivers in a high velocity impact, but I am not certain whether the problem is irrelevant as I see the distribution of the impact on the body posing a problem. It might not be worse than it was with other medieval armour, though.

Yes, and with little alteration from traditional design

A typical weapon causes damage by exerting a large amount of force across a small area. Armour protects its wearer by redistributing that same force across as wide an area as possible, causing less force per unit of area.

Thus a well built piece of plate armour made from immutable steel will always transfer all of the force across its entire surface. Instead of being struck in a tiny area on the soldier's chest, the same force is applied across the entire torso. For particularly heavy hits, this could cause the wearer to be knocked back a pace or two and may cause some colourful full-body bruising, but that would be the extent of it.

This differs from a car, where the damage is not caused by a large amount of force on a small surface area, but by the sudden change in overall velocity on the body. Having crumple zones in your armour will reduce the knock-back force, but will also create a smaller impact area if the hit is hard enough to crumple the armour into the wearer.

The knockback from the weapon will never be enough to cause injury in and of itself. As the weapon must be light enough to wield effectively, it will not have enough momentum in comparison to the soldier, who although not moving as fast, will weigh a lot more than the weapon.

Regular armor does not "absorb" impacts significantly. Steel serves to distribute the impact over as much of the plate as possible (and to prevent cutting and piercing hits) while the padding transmits the impact to the wearer. The impact does not disappear, but is spread out to the point where the wearer (or his arm/leg) is pushed back instead of being cut through.

I'd expect heavy padding to better distribute the more powerful impacts (immutable weapons would lead to people not caring about smashing a sword into solid armor as much) and possibly some improvements to how the armor is joined together - immutable joints can save a man from being ripped apart by an explosion and a well-constructed piece of armor might protect a man from getting crushed under a rock from a catapult.

Oh and I'd expect people to get very creative about making as much of the sheet thinner than 1mm as possible...

All of this is mostly for personal armor. With a material this strong available, I'd expect faster innovations. Armored vehicles and especially firearms will develop rapidly when even a heavy cannon has a barrel 1mm thick (and tons of sandbags to stop it from flying backwards :D ).

The problem of deformation is not insignificant.

A lot of the energy of a human scale impact is absorbed in the elastic portion of the stress-strain curve. Major car impacts are primarily absorbed beyond the yield point (plastic/inelastic) but before failure where no further energy is absorbed. An impact sufficient to dent normal steel plate armour would, in your totally inelastic armour, convey considerable forces to the occupant and potentially do moderate damage.

Stress-Strain Curve:
Energy absorbed is the area under the graph, impacts exerting forces below the yield strength will allow the armour to return elastically to its original form, forces above the yield strength will cause plastic damage (denting) and the armour will only partially return to original form but will still absorb the energy of impact. 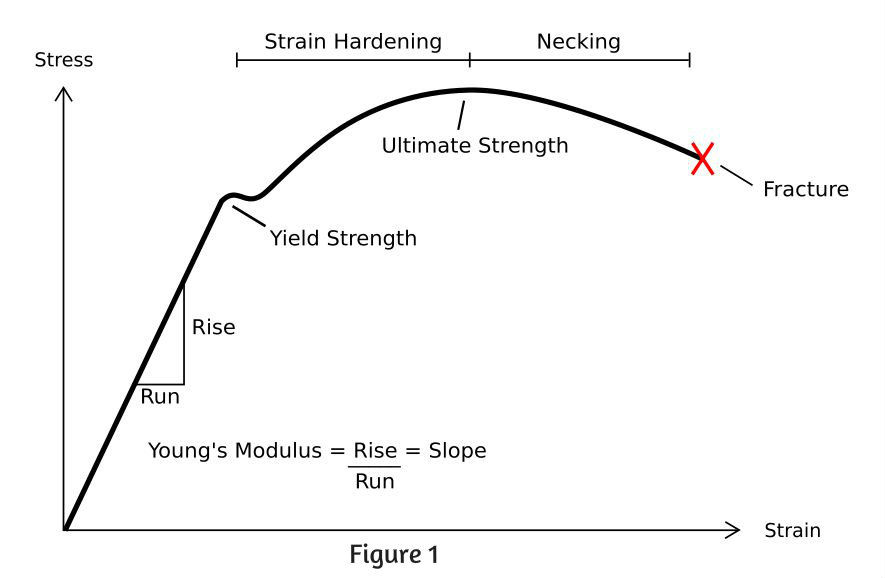 Your ideal armour would increase the energy absorbed in the elastic range, increasing the yield point, rather than prevent any physical deformation.

If you could create a material where the response below the yield strength was parabolic of the form $a^x$ rather than linear, such that it required an infinite amount of force to make it yield, you'd then be looking to tune the elastic response so that reasonable expected impacts fall within your allowed strain.

This would allow survival of significantly greater impacts that the infinite Young's modulus you have suggested in the question.

If you stick with a linear elastic response you'd be able to squash the knight in his armour.

If you go for the parabolic response the knight would be killed by the acceleration before the armour was deformed to the point of squashing him.

In either case the armour would return to return to correct form subsequent to the impact.

Not the answer you're looking for? Browse other questions tagged science-based medieval materials armors .

1
What kind of stellar core or degenerate material would be needed to create a survivable explosion?
35
Weaponry made from extreme light-weight steel: swords and daggers
73
Is it possible to create a practical sword that's naturally toxic?
3
Weaponry made from brittle steel: splintering projectiles
56
Build an impregnable fortress in the middle ages with modern technology
1
Could a steel cylinder punch through plate armor?
13
'Speed Bumps' as a Lethal Trap in Space Ship Combat
5
Wingjaw Steel: Superior Armor and Weaponry?
4
Aircraft aluminum grade 7075 used for body armor in medieval setting