Is a ring planet possible?

No planet in the center, just a large O shape made up of large chunks of rock that in and of itself itself orbits a sun, as if it were a planet (as distinct from a ringworld). I know most of the time, similar structures tend to coalesce into a planet, but is there any radius with any amount of mass where it would keep itself together with its gravity and yet not form a planet?

Not a solid torus, but a ring of planetoids. (Imagine Saturn but without the planet at the center).

It need not be habitable or earth-like in any extent, I just would like to know if it is possible, to sate my curiosity.

This is unstable See the Edit

We know that binary stars can orbit around one another similar to what you're doing with your ring-o-worlds. They orbit around a central "center of mass" point.

It has been suggested that anywhere from half to nearly all star systems are multiple-star systems, including systems of 3 or more stars. Therefore, it's possible for your ring-o-worlds to exist from the perspective of (and this is the important part) no other interfering gravimetric source.

The problem is when you put the ring-o-worlds in orbit around a star. That star imposes a difference in gravity between the planets given any moment in time. It doesn't matter how small it is. That it exists means a wobble exists in the ring-o-world self-orbit, a wobble that (over time) eventually leads to the planets falling out of their self-orbit.

Because of this issue, it isn't possible for the ring-o-worlds to develop in the first place. By the time habitability was attained, they would have long-since decayed into normal orbits.

After some research, I'm not so sure the ring-o-worlds idea isn't possible.

In October of 2012, the first four-star planet was confirmed by the Planet Hunters program from Yale. The planet – called Planet Hunters 1 (PH1) – is a circumbinary planet meaning it is orbiting a pair of stars instead of just one. Furthermore, orbiting that pair of stars is another pair meaning this planet is in a system with four stars total. With so many large forces acting on this system, the stability is, of course, a question of concern. According to the paper announcing PH1’s discovery, though, “the system is indeed stable on gigayear timescales” (Schwamb 2013). This implies there are formation possibilities never considered and is inspiring further study of PH1. ...

With their calculation, Schwamb et al. found the quadruple star planetary system to be stable; although they mention it barely crossed the threshold of stability. (Source)

A double-binary star system suggests a ring-o-worlds could survive orbiting around its star. And from our sister site, Astronomy.SE:

A double planet system is less likely. It's unlikely to form on it's own during planet formation as that requires too much planetary angular momentum during formation.

It's possible, but also unlikely to form by giant impact, as that's more likely to leave 1 planet and 1 moon. I've read (but can't find an article right now) that there's a giant impact size ratio and it's in the planet-moon range, not planet planet. Much less than 1 to 1. Pluto-Charon is 9-1 and Earth-Moon 81-1. A giant impact is also unlikely to create an Iron rich core for both objects. It's not a good way to create planet-planet.

That leaves a 3rd possibility, also unlikely, but perhaps the most likely of the bunch is planet capture. Planets can form in Trojan points in the same orbit (Theia). The difficulty with orbital capture is that the velocity needs to be just right and capture's are likely to be significantly elongated orbits, which, maybe, over time, perhaps with a 3rd asteroid, could even out to slightly more circular. This is very improbable, but it might be the most likely way to form a double planet.

At this time, as an amature, I must conclude that having a ring-o-worlds orbiting a star is, indeed, stable. But just barely. A rogue planet would likely throw this off. But it appears to work. Run with it.

This would not naturally work the way that you describe.

Saturn has rings because the ice and rocks that make it orbit the mass of the planet.
Without that mass, say if Saturn were to fall into a plot hole, the rings would quickly stop being rings and just become a cloud, which would disperse as their momentum no longer had anything holding it in place.

If you were to replace Saturn with a black hole with the mass of Saturn, then the rings would carry on as if nothing had happened.

A Neutron star was enough for Larry Niven — from Wikipedia - The Integral Trees is a 1984 science fiction novel by Larry Niven (first published as a serial in Analog in 1983). Like much of Niven's work, the story is heavily influenced by the setting: a gas torus, a ring of air around a neutron star. A sequel, The Smoke Ring, was published in 1987. — If it worked for Niven ... 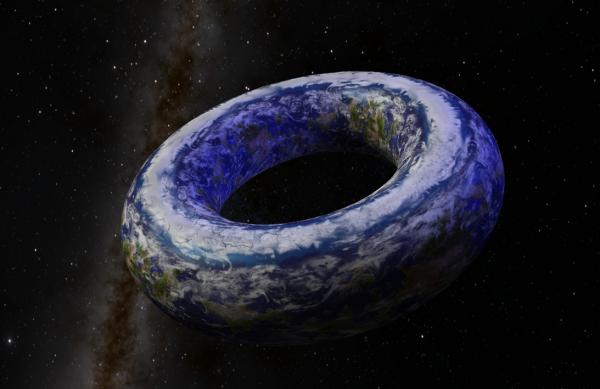 I recommend reading the Planetology section of the page. It discusses just how weird gravity, climate, and tectonics in such a world would be.

Some weird traits of the world:

There's also another page from the same website, called a hoopworld. 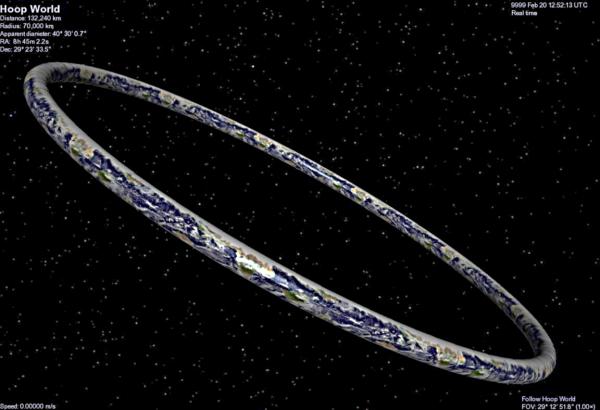 While this is more likely the answer you're looking for, the hoopworld does not provide as detailed information as the torus world. The hoopworld has a much larger external radius at 70,000 km, being a fluid ring with a solid crust that does require further stabilization

Not the answer you're looking for? Browse other questions tagged space planetary-rings or ask your own question.

31
Can a nonspherical planet exist and can it be habitable?
33
What would the problems with / consequences of a torus shaped planet be?
17
What would happen if the black hole at the center of a galaxy was removed?
10
Which part of the universe would make celestial navigation most difficult for a planet?
6
What minimal magic is needed to maintain a huge torus planet?
1
Is a Niven-esque toroidal planetismal really possible? And stable?

7
Earth with planetary ring
7
Size for bubble-ring generation ship
4
Can I have a planetary liquid or gas ring system?
3
How stable would a ring be around a tidally locked planet?
5
Could black hole civilizations even exist?
3
Forming a dust ring around asteroid Ceres
2
Can adding mass to a ringed planet cause a huge chain reaction?
3
Could co-orbital planets also be double planets?