How plausible are the terrain and land-forms on my fantasy map?

You might have seen me ask a few questions the last few days. Basically, I'm just looking for advice on how plausible this (very early prototype) map might be. Disclaimer: I unfortunately know rather little when it comes to map-making, so please feel free to rip it to shreds. That being said, I'm not going for pain-staking realism, but as much as possible would be good. I am completely fine with moving things around, changing landforms, altering the very nature of the planet, etc.

To give a brief summary:

Some other information about this world, though this stuff is all up in the air right now:

I can already see specific errors I'll need to correct, such as the climate disparity between the desert kingdom and the Mediterranean kingdom, probably issues with land-forms not being realistically designed or spread out enough, etc - I actually did want to split all of the continents apart more, but this Fantasy Map Creator doesn't allow for that.

I also did not use Plate Tectonics to plan this out. I might redo it with them in mind. 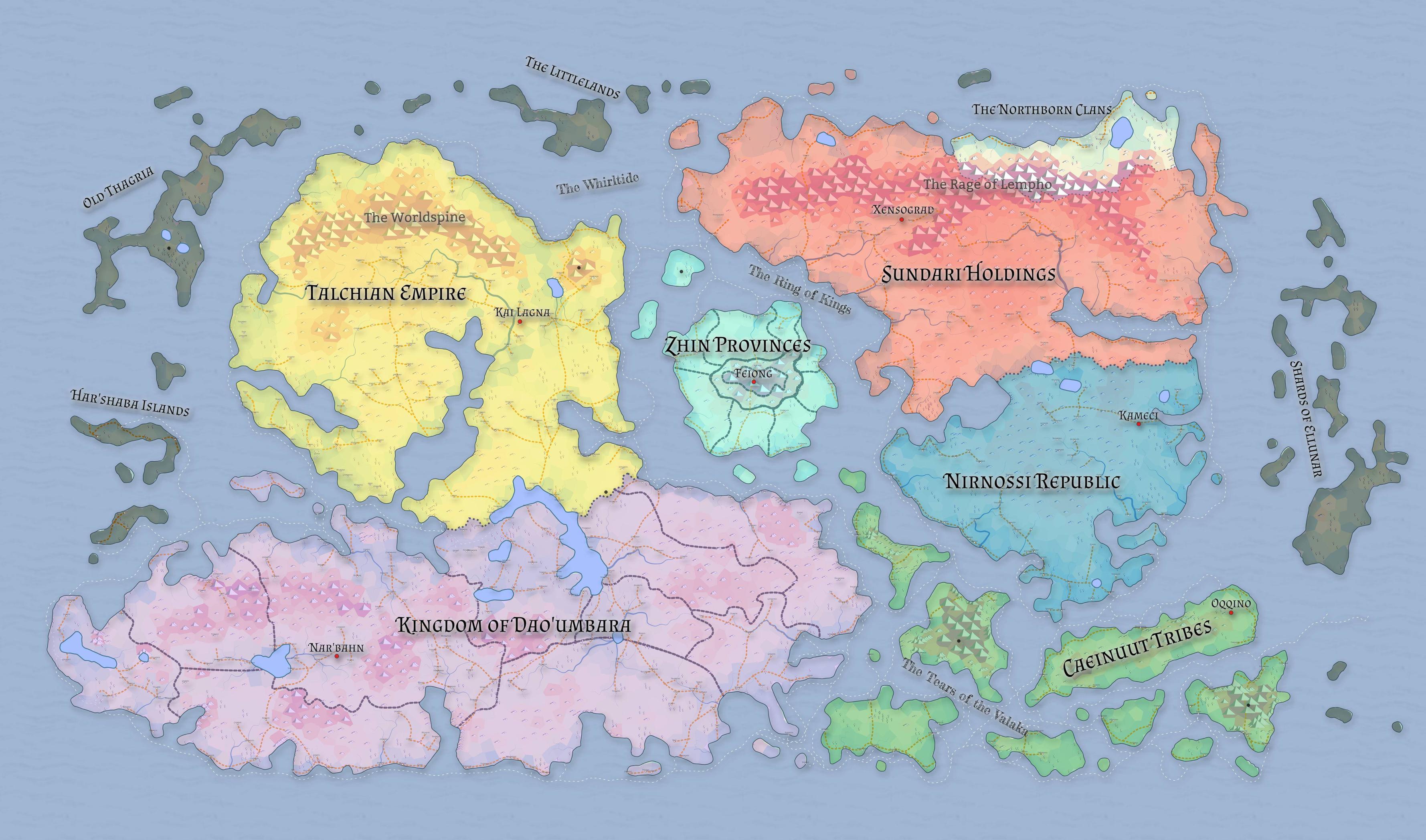 Geography on earth is the result of billions of years of weathering, plate tectonics, and many other factors. In this regard, geography is much like a story. One can create an arbitrary configuration of continents, mountains, lakes, streams, plains, hills, etc then create a history using natural geological processes to create those features.

Want big craggy mountains? Easy. Have a big ice age or two with plenty of glaciers to cut them through the rock.

Geopolitics not as arbitrary

The geopolitical portions of your map don't make as much sense to me. For example, the green country would have colonies on the shores of the blue and purple countries but I don't see any. This means that there's some kind of political agreement to not have colonies there or the blue and purple countries are strong enough to prevent from those colonies from forming. Clearly, the green country is a seafaring country as they maintain extensive island territories. Why can't they start some colonies on foreign shores?

In general, national boundaries form along natural borders such as mountain ranges (India, Nepal, China) or along rivers (Rio Grande river between US and Mexico) or constriction points. The boundaries between the yellow and purple countries makes sense. The extra long boundary between red and blue doesn't make sense. If I were in charge of securing the red-blue border, I would want it to be as short as possible so I can put more troops in a smaller space instead of spreading them out.

Depending on where exactly the equator is, much of this planet will be arid or desert. The coastlines where the winds come off the water will be green with plenty of rain. In-land areas (of which this map has many) will be drier or outright deserts. The map has a lot of land and not much water.

Reading up on the prevailing winds on Earth will go a long way towards informing your ideas of which climates will be where on this planet of yours.

Plate movements on the scale used on this map indicate millions or tens of millions of years worth of movement, not a few thousand.

Judging by the fact that a lot of these are kingdoms or empires, I'm assuming the world is pre-modern.

These factions are much too large for pre-modern control. Modern countries can handle being so large because we have sufficient infrastructure. We have nice roads and railroads which allow our militaries to cross continents in days. We have electronic communication to allow the central government to easily contact the farthest outposts in an instant.

The Zhin Provinces would have more extremes between summer and winter. Due to the lack of oceanic currents surrounding the continent / island, the climate would resemble that in Siberia.

If you look at a globe, central Europe is located at the same longitude as Siberia, but has much milder temperatures due to the Gulf stream. Your land masses are packed so tightly that there probably would be no big oceanic current between all of the eastern and western land masses.

10
Where are the wettest and driest places in this world and why
24
What colour is the foliage if the sky is violet?
9
Are my deserts accurately positioned?
3
How realistic is the placement of the cities and borders on my map?
2
Does my climate map work?
6
Advice on accuracy of world map
6
Is my topology/are my climate zones alright?
5
Is The Climate Map for My Alternate Earth Accurate?
5
Is my map believable?