Under what circumstances would a nuclear war render Earth's oceans uninhabitable?

It's a bit more complicated. I'm creating a sci-fi world for a tabletop game. One of my created races is a form of humanoid octupi. My idea is for there to be a nuclear war that forces their species out of their aquatic habitat. But I want to figure out a solution that still allows for a workable habitat on the surface. Honestly I am probably thinking too far into this as the world I'm creating is on a galactic scale. But if anyone has any solutions, they would be greatly appreciated!

Not possible. You land dwellers need the ocean to survive.

Don't forget that the oceans are part of the water cycle. If they are so messed up from radiation that no life can thrive in them, then the water vapour will be extremely radioactive too. Everything will die in areas where it rains.

Also don't forget that water is actually one of the most convenient materials for radiation shielding. In order to mess up with the oceans at large you would have to use such an amount of nukes that the surface would be scorched.

If you drop the full power of the Tsar Bomba on land, you can potentially devastate a very large area: 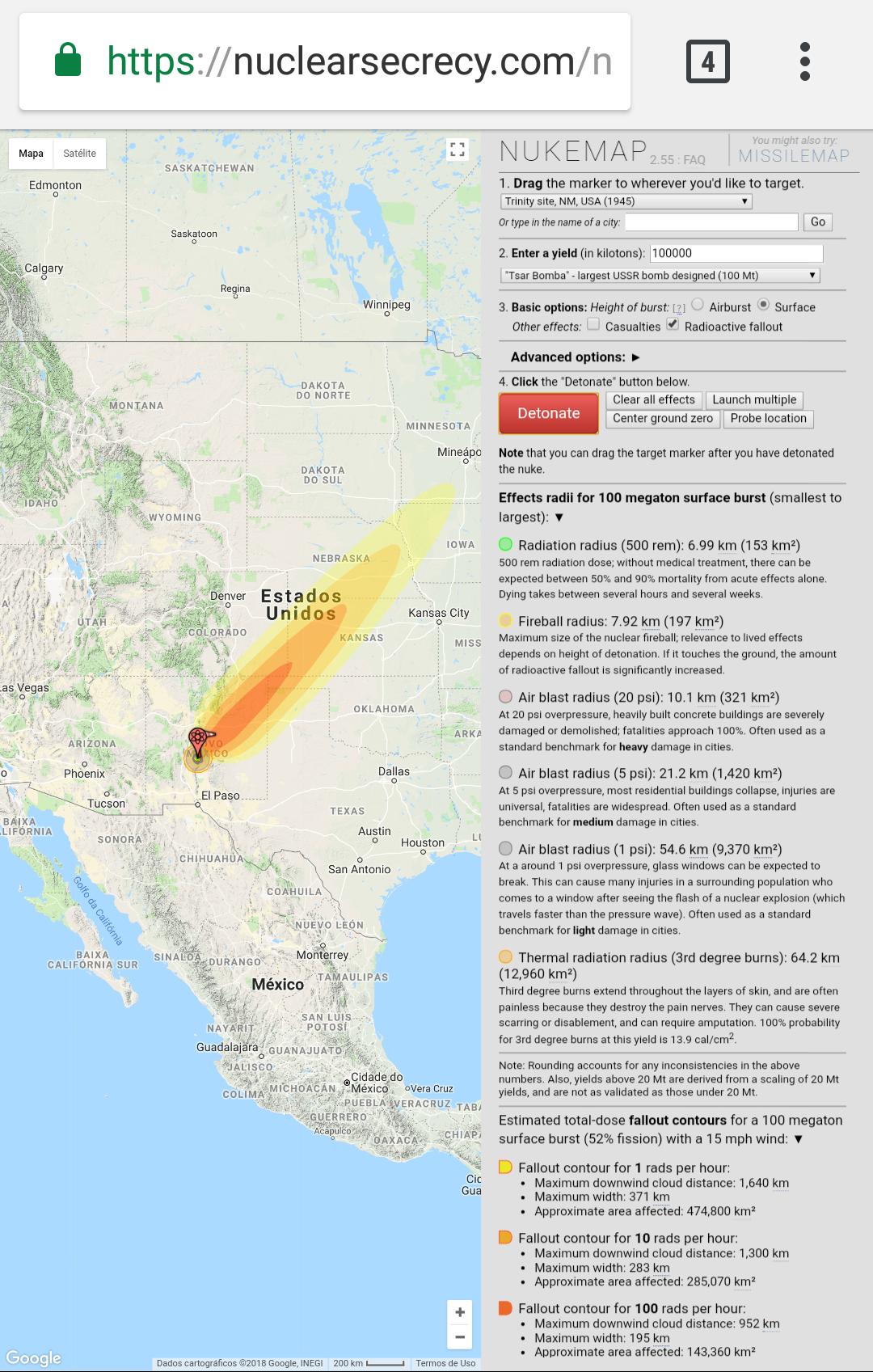 Do the same at the bottom of the ocean, and unless you've got a strong tropical storm going over it, you won't get much destruction done. The blast bubble will not be much larger than one kilometer across at most, and it will not make it to the surface. Radiation will spread but again, water is a very good shield - and there is lots and lots and lots of ocean to take that.

Perhaps the nuclear aspect of the war ended up being more tactical rather than strategic. The people in charge knew how bad it would get for their side if the use of nuclear weapons escalated too much. So they stuck to mostly pin-point low-yield nuclear attacks on key military and political sites. Conventional weapons gave more bang-for-your buck against infantry and tanks on the battlefield and posed less threat of fallout harming friendly forces, and wiping out cities would lead to retaliation in kind.

The open ocean, however, was another story. The ocean is big, and friendly forces were far away, making indiscriminate use of nuclear weapons less of a problem. Nobody knew exactly where the submarines were, leading to widespread use of nuclear depth charges and nuclear torpedoes both for offense and defense. Aircraft carrier groups were heavily armored, highly defended against anti-ship missiles, and spread over wide geographic areas, making strategic nuclear strikes the most effective solution. Lots of undersea fiber optic lines necessary to effective communication had been hidden, making nuclear explosions the most reliable way to interfere with enemy communications. It seemed much safer to knock out the enemies' satellites using high-altitude nuclear explosions over open ocean than over land. Etc., etc.

Further, the ocean was really the key site for the war. If we are talking about different superpowers on different continents with roughly equal military capacity, travel by ocean is the only way to effectively move large forces. The most effective way to beat forces coming from another continent is to kill them before they can land. So the bulk of the war ended up taking place at sea.

Basically, the issues around nuclear escalation and mutually-assured destruction that led forces to limit their use of nuclear weapons on land, especially around major population centers, didn't seem to apply to the ocean, leading to people being much less careful there.

Fallout ravaged the surface — but the surface had survivors, people who saw the end coming and built bunkers and shelters that preserved precious anarobic bacteria along with seeds and starts. It's taking a while, and bandits keep trying to steal the goods, but the land is recovering.

But nobody thought to preserve the sea....

And when the fallout fell over the sea it killed the fish and the whales and the seaweed and the starfish... and the plankton. And all the rest of the microbiotic sea life. It collapsed, forcing your octohumans to the surface just to find air to breathe....

And because nobody thought to save plankton and other microbes for the sea, the sea is going to stay dead until the land gives up her bounty to allow the death-and-rebirth cycle to begin again in the sea.

And now it's a race, a race to build enough biomash to drop into small, isolatable seas to help kickstart the process. It would free the planet for new growth... new civilization... and everybody wants that but the bandits, who want to stay in control by fear.

If these intelligent octopi already exist, then you really don't need much to explain why the octopi might leave the water. Real ones already do this to grab food on land over short distances. Intelligent ones might do the same - just venturing further onto land. They now realize humans are gone, and the remains of human civilization (tools, materials, knowledge) are there for the taking. If you are looking for longer term evolution, this could be what gets them out of the water at first, and then they evolve to be land dwelling creatures.

In a nuclear war, the bombs will target strategic cities and military points. Almost all of them are on land. If the oceans become uninhabitable because of a nuclear war, definitely the land will be worse.

However, you could (hypothetically speaking) take, as an alternative, a biological war (not nuclear). That event could deploy microorganisms over the land able to exterminate humankind. The microorganisms could mutate into the ocean and perform a "forced evolution", changing the marine ecosystem and making your octopi explore the land as a better alternative to live.

Nukes are not the way to go, if you do that much damage to the aquatic ecosystem you'll wipe out everything that uses oxygen. What you need is some kind of mid foodchain dieback that forces your cephalopods to seek nutrient sources ashore. It's about wiping out their immediate prey without destroying the primary, photosynthetic, produces. Weirdly enough we're actually doing a pretty good job of this at the moment with our fishing practices. If you force deepsea cephalopods in close to shore they'll be exposed to more wastes washing off the continents, this will include more radiation and will increase their rate of mutation and death, increasing evolutionary pressure on them and forcing either changes or extinction.

There are different ways this could happen in a Sci-fi setting, land dwellers over harvesting the deeps is one, the other that immediately comes to mind is a targeted pathogen designed to kill fish off.

Does not seem probable https://www.quora.com/Does-water-block-radiation

There is a reason water is used in nuclear reactors except for cooling. It blocks radiation exceptionally well. So actually, it seems the opposite. The most penetrating kind of radiation, gamma radiation is halved every 15 centimeters of water it passes through. That means after 1 meter of water only 1 percent of radiation is left, after 3 meters less than 1 part per million. On land you need lots of lead to block gamma radiation and the lead in itself is both a poisonous heavy metal and heavy as hell.

More realistic would be a story of a human nation building cities some 100 meters under sea level and use it to survive an all out nuclear war that totally destroys the surface of the planet. Like an Atlantis of the future or something.

You're better off with a chemical war rather than a nuclear war. If you had a highly water soluble, very long life, and extremely toxic agent, you could conceivably make this work. The land is rendered safe after some time as the water cycle flushes all of the toxins to the sea. Think salt, basically - our seas are uninhabitable to a species that is not salt tolerant, but freshwater is fine. Except in this case rather than large amounts of salt accumulating over a long time, a comparatively small (but still large) amount of toxin is released in the war. You can justify the amount of toxin by saying that large doses are required to kill quickly (i.e. to be useful for a hot war) but that it turned out even extremely small doses turned out to be devastating if exposed over a longer duration.

6
How a nuclear war in north hemisphere would affect the south hemisphere?
6
How long would the southern hemisphere survive after a nuclear war that, while intense, was limited to the northern hemisphere?
28
What would human survivors eat in a post apocalyptic Nuclear winter?
6
What would happen to the climate if Earth's sea-levels rose 2000m?
5
After a major nuclear war/disaster, how much radiation would remain after ~300 years?
1
What would the global effects of a prolonged nuclear war at sea be?
2
What animals would most likely fill large land animal niches after a mass extinction that wipes out 99% of life caused by nuclear war?
6
What would cause oceans to disappear?
8
What negative effects would stem from a world having many inland seas rather than large connected oceans?
3
What would the rest of the oceans look like in this scenario?