The scenario is that it is a post apocalyptic world where the most of the humans have been eradicated and the sources of energy have been completely depleted. In this scenario, people discover an alien artifact which would be the solution to their problems but the problem is that to open it, they would require a huge amount of energy (kinda like overloading it, it's the property of the artifact).

Now my problem is finding that power source to generate an ungodly amount of energy and also justifying that it is a one time thing (even unreliable)... Otherwise it would be the solution to their energy problems.

Extra info: the survivors all live in a specially created city. The earth's crust has been rendered unstable and flash earthquakes, lateral spreading and volcanic eruptions are quite common.

Use a nuclear fission powerplant with broken safety

An old nuclear power plant minus all the safety features that keep it from melting down. You can probably fire it up and keep it running for a few minutes before it inevitably explodes. As long as enough of the electric net is available or temporarily repaired, you could transfer the energy outside of the meltdown radius to boot up the artefact. After that, the entire area surrounding the plant will turn into a no-go zone and the powerplant will be rendered useless.

A nuclear powerplant with the safety features destroyed does not require any outside influence to destroy, it will quickly overheat and have a catastrophic meltdown. A nuclear fission reaction will naturally spiral out of control and destroy the entire powerplant unless security features are in check. This is what makes them so dangerous and why many people are opposed to them.

A short and basic explanation of the workings of a reactor: at the core, a nuclear fission plant contains a large amount of radioactive material. Radioactive material undergoes a powerful reaction that creates lots of energy when you bombard it with small particles. However, the reaction that generates the energy also creates more of the particles that sustain the reaction, at a better than 1:1 ratio. This means that, uncontrolled, the reaction will go faster and faster, producing more and more energy, until the plant will be unable to control all of the energy being produced and has what is called a "meltdown", at which point the powerplant is destroyed and the radioactive material is spread far and wide. This radioactive material is harmful to life and sent out in such large quantities that the site of the meltdown will be rendered uninhabitable for decades. (There was a meltdown at Chernobyl around the time I was born; I'm nearing my 30s and the area is still uninhabitable)

What a nuclear fission powerplant does is try to sustain the reaction over a long period of time by absorbing the generated particles that would make the reaction spiral out of control back into harmless material. This is done through what are called "control rods", which absorb the same particles that the radioactive material does, but not doing anything with them.

This is why I suggested a nuclear plant rather than a coal or solar plant; nuclear plants will always fail spectacularly, and most of the design of the facility is not dedicated to producing energy but to keep it from exploding.

For more information on how nuclear fission works, read up here: http://www.atomicarchive.com/Fission/Fission1.shtml

It explains the difference between nuclear powerplants and nuclear bombs, and you'll see that the only difference is that the power plant is trying to control the natural thing that would happen if you allowed radioactive material to react to particles; while an atomic bomb doesn't.

Bonus feature: you'll either need some (temporary) fast transportation to get the people who boot the powerplant the hell out as soon as it starts pumping, or you'll need to draw straws for who gets to stare a meltdown in the face.

There are many one-time energy sources around: They are called bombs.

So maybe there's a leftover nuclear bomb around. People would naturally not normally want to trigger it. However, if it is the only way to open that alien construct, and can be done at a safe distance (say, the alien construct is on an island far away, so the bomb can be transported there and then detonated after leavinf the island, possibly using a sort of improvised timer), then it would make sense to use it.

It's obvious that you cannot use the same nuclear bomb a second time. And there may not be any further nuclear bombs around (if your post apocalyptic scenario is due to a nuclear war, it's likely because all others have detonated in the war).

I am assuming that what you say "source of energy" you mean electrical energy. If not, please expand on just what you do mean.

So, I'm thinking a version of Ben Franklin's (probably fictional) experiment, in one of two forms. Both involve lifting a copper wire into the path of a thunderstorm.

Going with the old traditional route, a kite or series of kites (copper wire is heavy) get launched at the height of the storm.

For something with a bit more pizazz, small rockets are used.

Each has a drawback. The kite scheme is at the mercy of the winds to get the wire right up into the storm.

The rocket idea has a problem that may not be obvious: getting the wire to pay out at high speed without snagging, but it allows launch at just the right time and direction.

You could have your protagonist try both approaches: first the kite, then the rockets when the kites don't work, or vice versa.

Both approaches do have the problem that you need a bloody thick wire to conduct the current involved without exploding.

Also to be considered is that as the wire is being lifted, it must be live - that is, it must be connected to the alien power source.

Hospitals, internet data centers and various other critical infrastructure buildings are equipped with diesel generators they use in case of a power-outage. These allow the building to keep working through temporary lack of electricity and keep all critical systems online.

However, they use a lot of fuel and resupplying them is a logistical nightmare. In a post apocalyptic world, they will all be empty (they would have kicked in automatically and then run until out of diesel) but they will probably still work.

The only reasonable way would be to try and get your hands on a fully loaded fueltruck, somehow get it to the building (probably a very dangerous trip) and then pump the fuel into the generator. Then you can have power for a few hours. Enough to work on the device. Not enough for a permanent fix.

However, if used sparingly and on a smaller generator, it is also enough to have light and some powertools in a small village. This probably means most immediately available fuel is already used up, so getting your hands on a few thousand gallons will be really difficult and it will be an incredibly valuable resource. Expect everyone you meet to be interested in taking it from you before you reach the hospital/data center.

What you need is a bank of ultracapacitors: 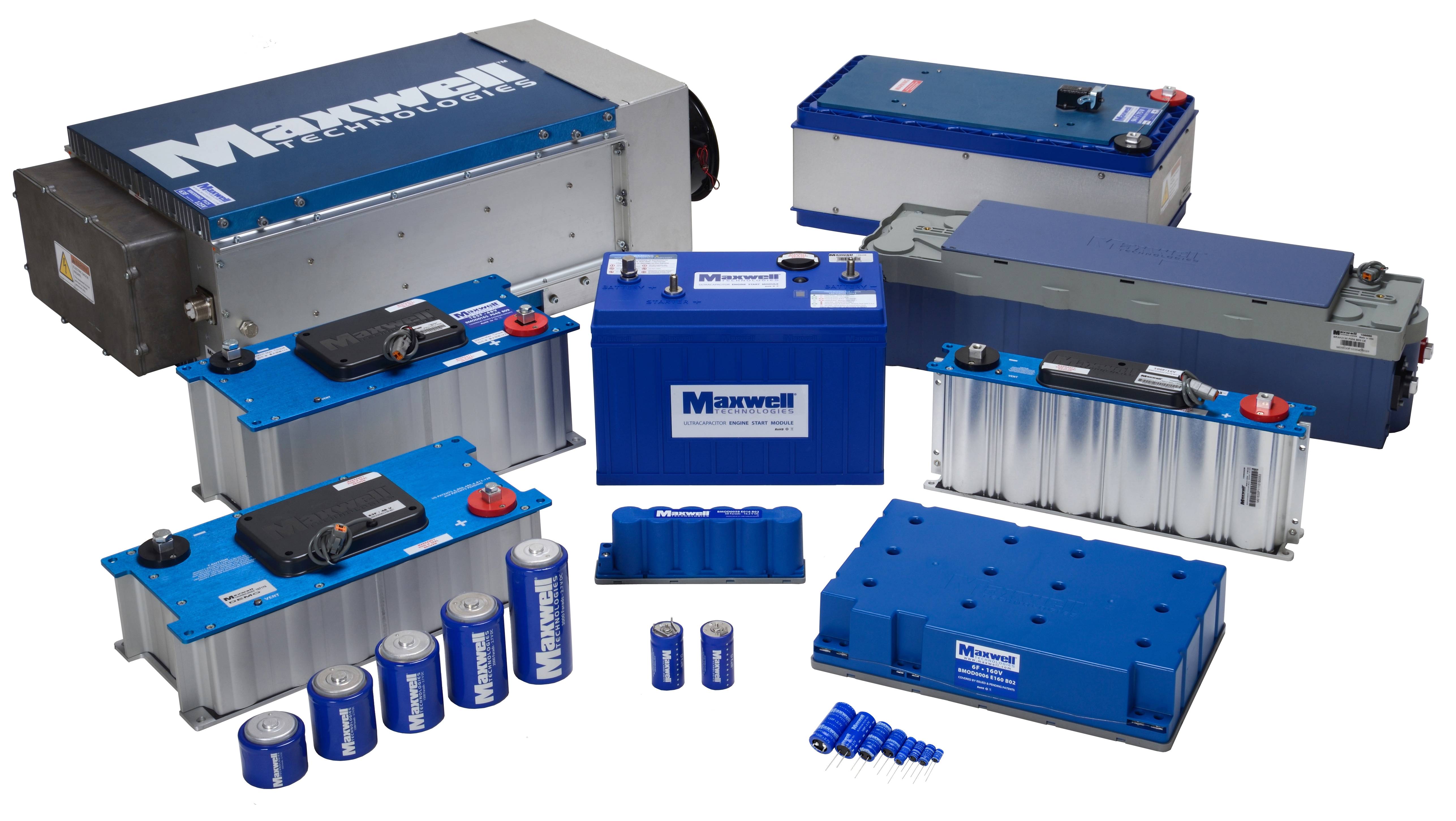 A bunch of those and you get a way to discharge large ammounts of energy in a short time span. Energy versus time equals power. Charge the bank with a diesel generator across a current limiting resistor (lets say a lamp) and a diode, then discharge it on the device with no resistors to hinder current. The low ESR of the bank, coupled to its very high capacitance means that it can zap large ammounts of electrons in short time. This allows to do things like railguns or EMP bombs, and should present no harm to the device you intend to open, provided that it is designed with this use in mind. In your story, characters might scavenge ultracapaciors from modern/modernized electrical TRAMS, where they are used in the regenerative breaking system.

Magnetohydrodynamic (MHD) generators would do the trick - specifically, those of the 'pulsed power' variety.

MHD generators are 'fluid dynamos'. They harvest electrical energy from the movement of an ionic fluid through a magnetic field. There has been some interest over the years in using these to 'top' thermal (and particularly nuclear) stationary power infrastructure, for a major boost to plant efficiency.

But during the Cold War, the Soviets (in particular) had an interest in 'pulsed power' MHD generation for powering laser weapons - and, later, geomagnetic surveys - by using solid-fuel rocket motors exhausting through a solenoid. The high-temperature rocket exhaust produces a thermal plasma, which is then harvested by the coil, producing a massive pulse of electrical power: one such system, the Khibiny MHD generator, produced a 60 megawatt (MW) pulse for seven seconds. (Source: EIR Science & Technology (1995) MHD pulsed power for geophysical research)

The best thing about these systems, for your purposes, is that they are (somewhat) portable, disposable, and single use - not only are solid-fuel rockets typically single use devices, but the MHD generator is itself uncooled, and tends to end up as a pile of slag once the rocket burns out.