What would the temperature be like in a black desert?

This is mostly asked out of simple curiosity since this is the backstory of a LARPer’s character within my story and thus has little expectation of scientific rigor. But basically, this character is one of the last survivors of a tribe who lived in a desert made of black sand. And I was wondering if making the desert sand a color completely on the opposite side of the heat absorption spectrum would do any crazy, unlivable things to the daily temperature there. Would it make the desert hotter? If so, how much? Would they even be able to survive there?

I can't find any spectrally-black sand deserts on Earth, but I can find Reynisfjara, Iceland, which has actual black sand beaches.

There are more consequences than just heat

I'm going to assume we have legitimate spectrally black soil form from normal planetary processes and not magic. In that case, soil is usually made up of oxygen, silicon, aluminum, iron, magnesium, calcium, carbon, sodium, potassium, hydrogen, and nitrogen.

Eight chemical elements comprise the majority of the mineral matter in soils. Of these eight elements, oxygen, a negatively-charged ion (anion) in crystal structures, is the most prevalent on both a weight and volume basis. The next most common elements, all positively-charged ions (cations), in decreasing order are silicon, aluminum, iron, magnesium, calcium, sodium, and potassium. Ions of these elements combine in various ratios to form different minerals. More than eighty other elements also occur in soils and the earth's crust, but in much smaller quantities.

The organic fraction of a soil, although usually representing much less than 10% of the soil mass by weight, has a great influence on soil chemical properties. Soil organic matter is composed chiefly of carbon, hydrogen, oxygen, nitrogen and smaller quantities of sulfur and other elements. The organic fraction serves as a reservoir for the plant essential nutrients, nitrogen, phosphorus, and sulfur, increases soil water holding and cation exchange capacities, and enhances soil aggregation and structure. (Source)

Actual spectrally black soil is volcanic in nature and contains very, very high levels of iron and magnesium. The most obvious of these is obsidian. The point here is that truly black rock has more in common with metal than it does sand or soil.

Black sands will have more extreme temperature swings than lighter colors. Because of this, your black sand desert will get hotter during the day and colder at night than a regular desert. This is because all objects release and absorb some Thermal Radiation, with darker objects both radiating and absorbing more.

However, most of the exchange in thermal energy on earth comes from conduction and convection, so the effects of it would not be very strong. Ultimately, it would not do any "crazy, unlivable things" to the temperature, and you could still have a livable desert.

I've been on volcanic beaches and in a part of the egyptian desert both called "black". For example, here's a picture of the beach close to where I was: 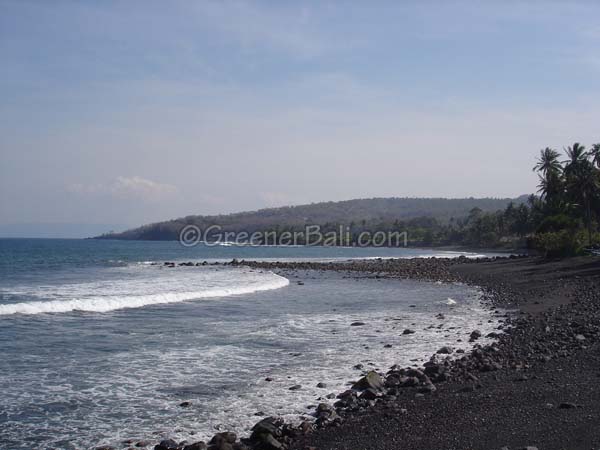 There is not so terribly much difference to a white beach. After some time in the full sun, they are both hot and from what I remember, whatever difference there were was not very noticeable. The sand itself gets a little hotter, but since it absorbs more light, it reflects less heat, so when you are wearing proper footwear, it doesn't make much of a difference.

From what I know for sand to be black in such enormous quantities it's origin must be volcanic. Having magmatic activity around already makes a place pretty hot, although the sand may have originated elsewhere and traveled in various ways to the location of your desert, what would mean there's no high vulcanic activity in the area.

There are of course much more factors to take into account in order to give an exact answer: the average temperature of your world, how much of an impact does the greenhouse effect have, the axial tilt of the planet and the relative position of the desert to the ecuator...

But to give an approximate answer to your question: Yes, black sand would mean more light (thus heat) absorption from the soil, resulting in both a hotter overall climate in the area and much hotter soil. The how much depends in a lot of things, varying from a simple no-go zone with little to no living beings, to molten glass lakes (the conditions for this may be a little too extreme for there to be life on the rest of the planet).

These types of deserts will always be hotter than normal ones. How unforgiving the area is depends on you and since you said the story has little expectation of scientific rigor there's always the possibility of heat-proof technologies paired with underground cities or just beings that stand extemely high temperatures.

The Canary Islands are a group of islands that are Spanish territory off the coast of Africa 62 miles or 100km away at their closest point. They are also on the same line of latitude as the Sahara desert. They are considered to have a desert or semi desert climate.

They are also highly volcanic formed from an Oceanic hotspot in a manner similar to the Hawiian islands meaning that the volcanoes erupt what is known as Mid Oceanic Ridge Basalt or MORB.

This has lead to the creation of areas such as the Timanfaya National Park on Tenerife that would be described as having black sands and a desert environment. The temperature there is not wildly hotter than other deserts on similar latitudes. Although as others have said what defines a desert is amount of rainfall there are deserts in the South Pole that are at sub zero temperatures.

From something I read a while back, the darker regions on the moon are actually volcanic rock which, when sunlit, stands out against the void of space, but would actually be black or nearly black if you looked at it on Earth.

The sunlit side of the moon can reach 100 to 120 degrees C (210-250 degrees F). Bear in mind it is exactly the same distance from the sun as we are, though it has no atmosphere.

The area is actually a desert BECAUSE it is black and normally that area would be a more temperate climate if it had normal soil and sand.

(This might go against some of the science that others are spouting but, if you aren't overly worried about the high science and just looking for something that sounds right(ish) then this could work for you)

You can get a first order approximation by visiting a large parking lot.

However there is thermal temperature and YOUR temperature. In a white environment you will be receiving sunlight from multiple angles. In winter you can easily double those numbers on a sunny day.

Secondary effect: In small black deserts (parking lot to, say 30 km (20 mi) across, the warm surface will set up convection. Sailplane pilots look for thermals from parking lots or ploughed fields. So for a small black desert the effect is self limiting. With larger deserts the air can't rush in fast enough. So you would end up with a warm low pressure area.

If you want to experience it here on Earth on a larger scale, visit "Craters of the Moon" national monument in Idaho. You may be able to reference weather station data, and compare. Not big enough to not be cooled from outside. Google satellite image:

Not the answer you're looking for? Browse other questions tagged internal-consistency deserts .

7
Hamada this place! Plausibility of hamada desert features in a polar region
7
Technological complexity in a tribal setting?
9
Rocky desert or Sand desert - Which would appear in this scenario?
7
What could cause the desert?
2
Planet with no rain, only fog, like Chile's Atacama Desert
10
How could Dwarves prevent sand from filling up their settlements
5
Northern Great Lakes in an Alternate Island Africa--Would the Sahara DESERT Still be Around?
4
Hygiene in a Desert-like setting
27
Is it possible for the soil of a desertic exoplanet to be so copper rich that its surface is mostly covered in green-blue deserts?
22
In a desert made of sugar, what would happen if it rained?