What type of stone should I use for these hills?

The capital of a country is built on a series of stone hills that gradually lead to the ocean. The stone is noted for both the strength of castles made from it and its unique blue-green coloring. This city is surrounded by the ocean on one side, and steep mountains (which are responsible for the area's long rainy season) on the other.

What would be the best stone to use for these hills?

Next are igneous rocks. The color could come from underground mineral deposits, and the hills themselves could have been made from gradual lava flows. Igneus rocks can be very strong, withstanding both erosion and attack. Granite is a great example.

Metamorphic rocks are last. They can come in many different colors, with blue and green already being fairly common. While generally not as hard as igneus rocks, they could start as igneus rocks and morph over time, eventually being uplifted to the surface.

So, in summary, my question is this: What rock can I use that is strong, contains a mineral that makes it blue-green in color, and can form in a series of hills?

Can I recommend some serpentinite?

Literally named for its greenish color and certainly bluish under certain lighting, serpentinite is your best bet for a couple reasons.

First, it’s highly durable. Serpentine group rocks are metamorphic, forged at depths of up to 60km inside the earth and exposed by uplift and erosion. This process often leaves the serpentinite exposed on the surface, and its durability means that it persists even when the other nearby rocks have worn away, making them popular amongst rock climbers. 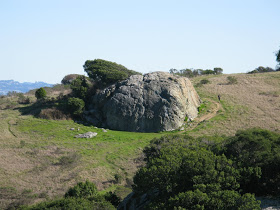 The tendency to produce individual, boulder-sized rocks gives another excellent reason to make castles out of it - you just have to pick them up and pile them in the right way. Their abundance and diversity means that mining and excavation is minimized without compromising on quality or sturdiness. You’ll still want a few carvers on hand, but the hard work has largely been done for you. Here’s an example of a serpentinite building: it’s held up for a few hundred years so your castle will have an acceptable lifespan as well. 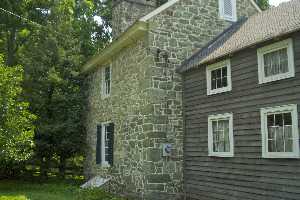 Additionally, serpentine minerals are already found in rolling hills and near oceans. They’re also famous for specialized and exotic plants that have grown accustomed to the high levels of cobalt and cadmium in the hills. This makes for some cool botany already even if it isn’t a part of your story.

If true serpentinite isn’t blue enough, well, it’s metamorphic! Mix some blueschist in there and you’ll get a darker, bluer stone. Blueschist is a bit more fragile than serpentinite because it has a few planes of good cleavage, but after some significant serpentinisation it’ll probably be nearly as hard. Fortunately, blueschist forms under similar conditions and locations as serpentinite. 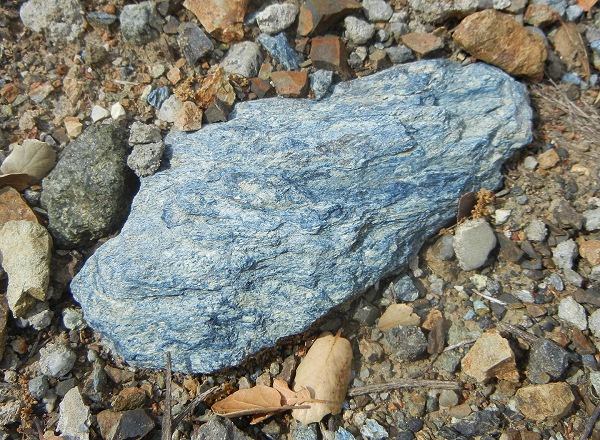 Granite comes in a variety of colours, green among them. Unless your kingdom is sitting on a veritable bonanza of emerald and turquoise, I'd lean towards granite. 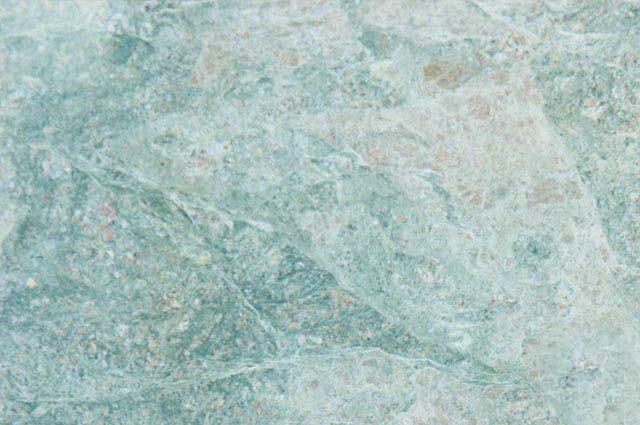 From what I've read, granite doesn't come in blue. Other types of stone are marketed as "blue granite".

I think you could argue the stone above kind of looks glasy-greenish-bluish.

Granite has been long used in fortifications, of which the castle is a type: 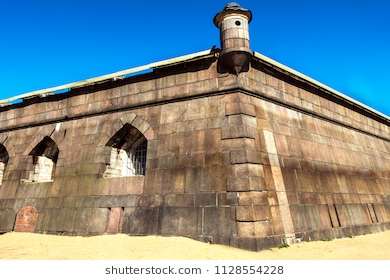 Granite also has the benefits of being durable and of not being a source of asbestos, which is of concern in, for example, serpentine.

Have them build a log castle out of petrified wood. You can have a forest's worth of these. Giant, ancient trunks larger than any trees that exist on earth today. Any color you want, and many colors if you want that - whatever minerals produce the crystallization will confer their colors to the logs. The logs are stone and will last forever. They can be used as is, for a sweet log cabin look.

Blue quartzite, perhaps? It is a hard metamorphic rock. The colour is fairly subtle rather than bright blue in most of the pictures I can find on the internet. 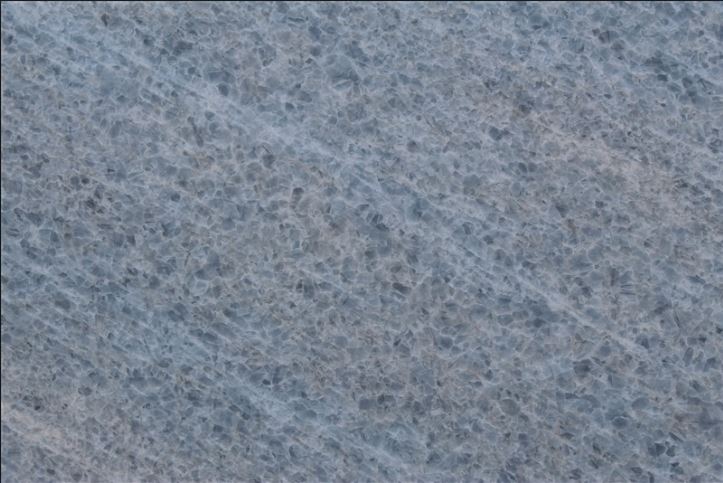 I can't say for sure if the really strikingly blue polished examples are as the stone appears in nature, or if it have been enhanced by dye for the interior decor trade. 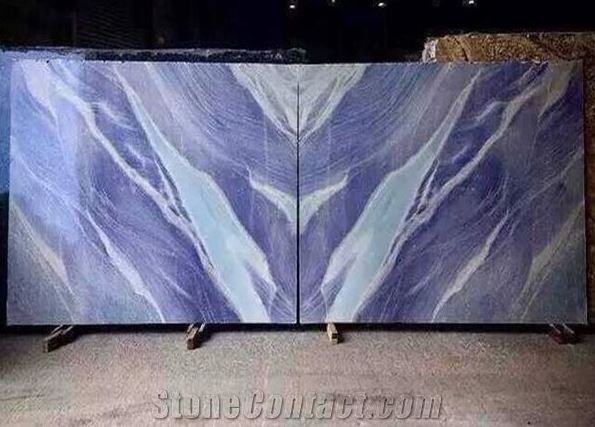 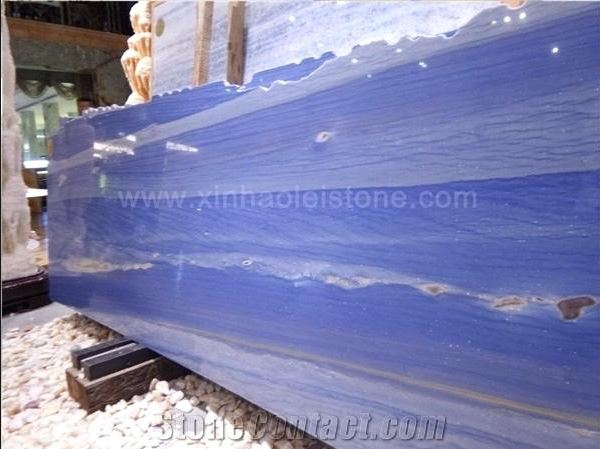 May I recommend Jasper, jasper is usually agatised clay of some description, (clay that has been cemented together by silica deposited by geothermal fluid) it varies in colour from red to bright blue depending on the exact mineralogy. It is very hard wearing in nature and fully capable of forming mountains in quantity. Jasper is mechanically comparable to the iron cemented sandstone they're using to build Guédelon Castle being very hard but relatively easy to work.

Tourmaline. (enclosed in some mother rock) 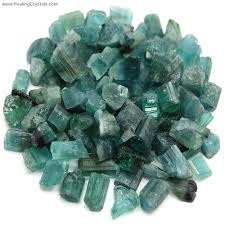 Tourmaline is extraordinary hard : on mohs scale it has a rating of 7–7.5.

(between quarz and topaz) (10 would be diamond already)

it can have many colours but it can be blue-green colored as well.

Not the answer you're looking for? Browse other questions tagged geology or ask your own question.

1
What are some of the reasons for a river to split?
5
What geographic features occur at each type of tectonic plate boundary?
5
What should be adjusted for old Earth-like planet?
1
How close to Impossible can Navigation be on a Jungle Planet (for a Stone Age Civilization)?
5
What are the best books on geology and plate tectonics for worldbuilders?
9
What locations in a galaxy would be best for stone carvings to remain undamaged or worn down for as long as possible?
2
What kind of rock could I use in my mountains?
3
Any advice on what is a realistic way to use plate tectonics to create landmasses and barriers?