Why might obesity be seen as attractive in their culture?

So, on the Jungle world of Qualis, the Qualian species evolved from small, tiny lizards to intelligent humanoid who dominated their planet. They built cities, from small towns to large metropolises, and technology advanced. They are social animal, and created complex social orders among themselves.

Being super obese slows you down and makes things difficult. It is harder to deal with your environment. Look at a really heavy person walking down the street and think how strong they must be to carry an extra 200 labs day in, day out. You have to be in good shape if you are really fat and can still get out there and make things happen. It is the opposite of being lazy. A male who can pull that off could be a good mate. It is a situation similar to the peacock's tail - super burdensome for the males, but the bigger and better it is, the more the females dig it.

Each generation, the peahens prefer the peacocks with the most impressive tails, which leads to an increase in the average tail quality in the next generation, when the peahens will again select peacocks with the best tails, leading to an increase in quality, and so on. This positive feedback, which is a hallmark of sexual selection via mate choice, leads to a runaway process where a courtship signal becomes more and more extreme.

The courtship signals used in mate choice are generally costly, either by requiring a great deal of energy or by making the individual more vulnerable to predation (or both). Costly signals are necessarily honest ones, since an individual has to be in good health to be able to maintain them. In other words, size only matters if it's expensive or risky; if the signal is easy to fake, it isn't an honest indicator of good health or good genes. The costs also limit the runaway feedback process of sexual selection. When costs aren't a constraint, a trait might continue becoming more extreme until it hits physical limits.

Obesity is a way for the ancestral males to show off their surplus vitality - just as the peacock's tail is a way for the male peacock to show off that he can carry that thing around and not get eaten by a predator. Maybe your creatures have escaped most of the costs incurred by their ancestors which prevented runaway obesity - in the old days the males who got too big or who had too much genetic tendency could no longer compete. Now they can compete and so males with an extra dose of genetic bigness go ahead and get really really big. 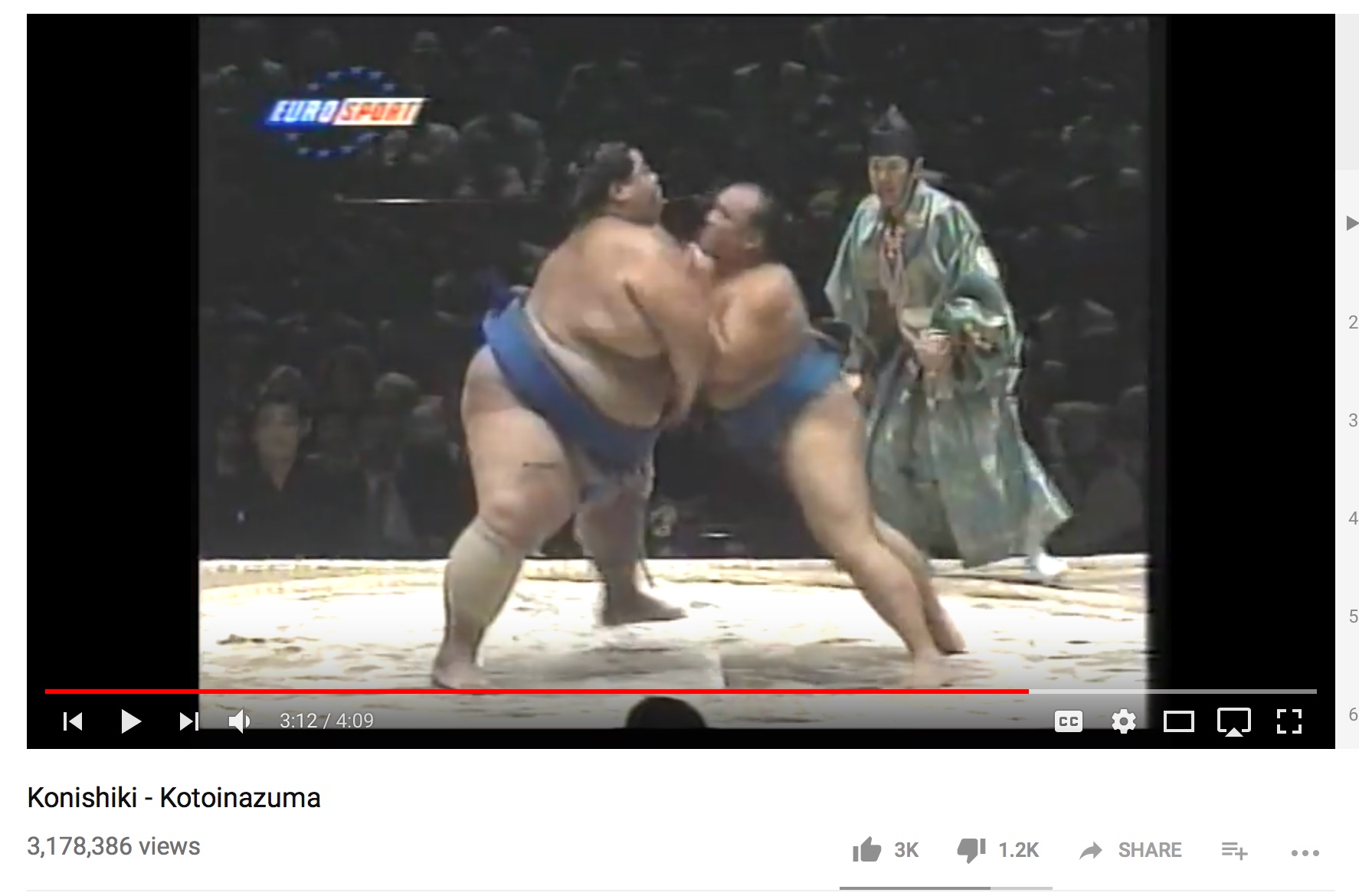 Combat by males of the same species is often nonlethal. Consider bighorn sheep, or elephant seals, or bears, or hippos. The combatants don't really care if the other one dies, but that is not the point - the point is to defeat him and have him go away and leave you alone with the ladies. Size often helps in competitions between males and I could imagine competitions of this sort like sumo, where huge body mass is a big advantage. The biggest guy will probably win. For the females, the biggest guy is going to be the daddy and he has the genes to make winning babies, he is the most attractive.

He has actually worked hard in order to be so fat

In some cultures of the past, it was an honour for husbands to have a fat wife. That was because people were very poor and if your wife was fat, it means that you had enough money to buy food in excess for her.

They think the same, Ehrgun V is so hard-working that he is able to earn enough money to buy or gather food and eat in abundance, that is why it's so fat.
Obviously, women or men (not sure the sex of Ehrung V) would like to be married to a so hard-working person, they know they never would suffer hunger or lack of money/things.

Be fat is a symbol of power, richness and hard-working. Even if you say that a fat person is lazy, he has more reason! He had worked so hard that know he has free time to enjoy his richness and get fat.

There have been several times and cultures in human history where body fat was considered attractive. Possible reasons are:

Lack of nutrition & symbol of wealth

When food itself is scarce, only the mightiest and wealthiest individuals have the possibility to become fat. Everyone else has to labor away to get just enough food to stay in healthy working condition

If the kind of food readily available if full of fibre and protein, but lacks natural sugar and fat, the people eating it will have a full stomach, but no body fat. If the highly nutritious foods are scarce, only wealthy individuals can afford to become fat.

Symbol of vitality and fertility

Bodies ridden by illnesses or infested with parasites seldom become fat. So obesity can be a sign of a healthy body that has enough energy to produce healthy offspring.

Labor intensive work is always less desireble than intelligence work. Scholars, priests, scientists and the like don't burn as much energy as farmers, masons or construction workers. They could gain more weight with the same nutrition as laborers.

I actually believe there are real-world Earth cultures you can draw inspiration from here.

So you want a culture where hard work is considered a virtue, but you also want that culture to see being fat as being a good thing.

Given that energy stored = energy input – energy expenditure (by basic thermodynamics, all of the energy has to go somewhere) and that energy stored is (in Earthlings) often fat, there are two ways to have your creatures get fat.

You can decrease energy expenditure. This means working less hard, and since your society values hard work, that's out as a long-term strategy.

Being able to eat more and/or better can easily serve as a proxy for being able to command a richer territory, or whichever other terminology your lizard-humanoids might use. That ties directly into the ability to provide for one's offspring, as, all other things being equal, fat individuals are more likely than skinny individuals to be able to provide the food needed for reproduction and the raising of young.

The individuals who have access to the largest amount of easily accessible nutritious food are the ones who are most likely to be able to eat more than they need in order to survive. By seeking out fat mates, your creatures are selecting for an essentially direct, and easily observable, proxy for sustained access to nutritious food. Those who have easy, sustained access to large amounts of nutritious food thus get a double advantage; not only are they able to keep themselves and their families well fed, they also communicate this to potential mates. Therefore, those individuals are the ones who are more likely to get to procreate, passing on whatever qualities they have that led to this situation.

And there you have it: being fat now confers a direct evolutionary advantage over a less fat individual, both working equally hard.

Ok, so very seriously going to ask you a question.

Have you ever seen an overweight reptile?

It doesn't necessarily look the same way you would expect a mammal that's overweight to look.

Overweight lizards, on the other hand, may have a thick layer of fat over their backs and sides, making it impossible to feel their spines and ribs underneath. In addition, many fat lizards will have fat deposits under their necks, making them look like they have jowls, and may have torsos that appear pear-shaped rather than streamlined. Obese lizards also may have so much fat deposited in their tails that their tails are wider than their bodies.

Most of the time when you're looking at a fat or even obese lizard, it's hard to tell--and it's the TAIL that's the giveaway.

With small lizards, that have a very defined size limit, being fat messes with temperature regulation, which in turn makes them unable to process nutrients, which generally pushes their weight down again into a normal range. Obesity normally only happens in captivity--in optimal conditions.

Now you say they value hard work, but what that means depends on the era we are talking about. The oil and railway barons of the 1800s in America certainly worked hard, and had opulent wealth to show for it, but they certainly weren't outside pumping the oil themselves.

You can value hard work and still find obesity attractive. Also, the two, newsflash, are NOT MUTUALLY EXCLUSIVE. I know a few obese crossfitters who have stayed very overweight. And they CAN lift, and do work hard.

But that's mammals. You have the problem of the reptile system being what it is, and that's a bit of a different thing.

For most of human history, obesity reflected wealth, and skinniness reflected poverty. And wealth is a desirable quality in a mate. (Other answers have also pointed this out, less directly.) Think of paintings by Rubens, from a time when female obesity was seen as voluptuous and desirable. (Warning: many examples on that page show a lot of skin.)

Reptile physiology is a bit different, but aren't you more afraid of an enormous crocodile than a skinny one?

13
Could humanity ever hope to accept aliens into their culture?
23
What could cause a culture to change their writing style?
3
Why do shapeshifters not kill their doubles before taking their form?
3
Why might the ability to attack using directed nerve stimulation evolve?
29
Why is this culture against repairing broken things?
2
Why might a creature appear to exhale dust rather than gas?
4
Can culture A adopt culture B's language entirely but keep their identity intact?