In the Time Crisis series of games, terrorist-for-hire and recurring antagonist, Wild Dog has a cannon mounted in place of his missing left arm. Throughout the series, this weapon takes various forms such as a flamethrower, a rocket launcher, a grappling hook and even a tractor beam. Although, Wild Dog's personal favourite seems to be a multi-barreled Gatling gun (an M134 Minigun, if the IMFDB is to be believed), which he uses in Project Titan, Time Crisis 2, 3 and 4. 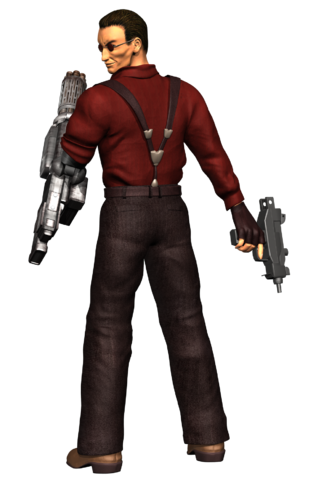 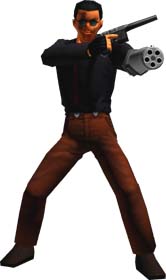 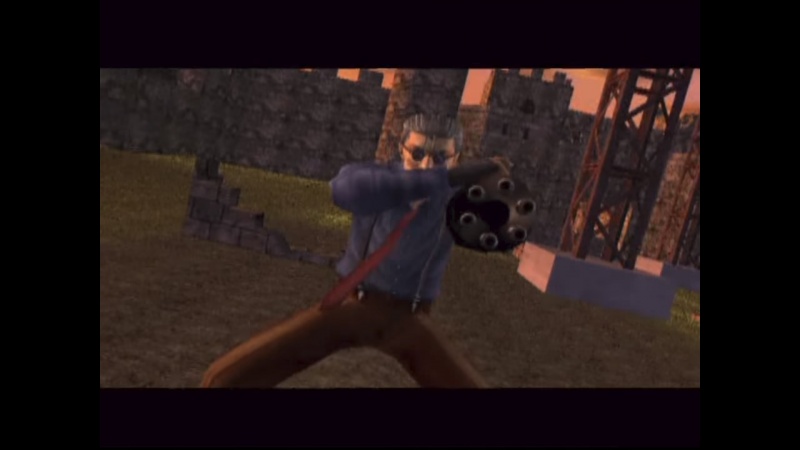 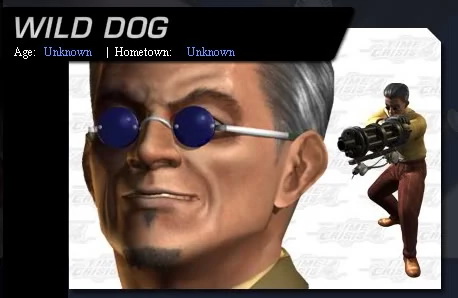 Here are the weapon's specs, according to the IMFBD:

Would an arm mounted mini-gun be useful/practical?

Nope, not really all that practical. There are a few things wrong with the way the thing is depicted. For more info take a look at the wiki forthe m134 Minigun

1) You have a mini-gun that is capable of firing 6000 rounds per minute. That means you have to carry all of that ammo. Even if you update the thing to fire caseless rounds to save some weight, 6000 rounds is still going to be really heavy. Just the ammo, not counting the powder, primer, and chain linkage, would weigh more than 108 lbs. Add to that the motors needed to drive the barrels and firing mechanism. That will give you a bunch more weight. Then add to that you need a power source to spin the barrels. Even top notch Lith-Ion Batteries have substantial mass when you consider the power requirements. A Minigun, unlike normal machine guns, does not use recoil or gasses from firing to advance the next round.

2) You don't get to skate past Newton's 3rd law. Each round would generate around 10 foot pounds of free recoil energy. The rate of fire is such that you are firing 100 rounds per second! One shot from a .308 Winchester (the basis for the 7.62 nato round) can bruise the shoulder of a careless person. Repeated impacts at that rate is going to pound Wild Dog's stump to jelley, possibly causing tons of stress fractures to the bone beneath.

3) Heat. Those barrels get hot! You can cook bacon on a gun barrel. The burning gunpowder and friction of the slug down the barrell heats these things pretty fast. Even a bolt action rifle barrel gets too hot to handle with bare skin after 10 rounds. That's after a slow pace, several seconds between shots. You are talking about 16.667 shots per barrel per second.

Having some sort of 'gun arm' may be a fun idea. Something simple like a modified revolver or shotgun would be better for other reasons. Most firearms have mechanisms like magazine releases, trigger pull, safeties and so on that are designed for people with fingers. You would have to be doing all of those functions with the off hand. Loading up a box magazine would be a freaking nightmare with one hand. Re loading a revolver would be simpler, especially if you use a speed loader. Do it in the interest for quick draw capability, But leave the Mini-Gun on a truck.

It strongly depends on the setting / living conditions of the character. If having a gun at your hand is essential for day-to-day survival, having a gun arm might be an advantage. But otherwise it's damn impractical...

Since ancient times people replaced missing hands with prosthetics or tools like hooks. That's because simple activities like preparing food or putting on clothes are extremely difficult with only one hand. A gun is not much help in that area.

Furthermore, the human body needs to be in balance. Attaching a very heavy prosthetic to only one arm constantly pulls at the shoulder. Malpositioning, deforming joints and constant strain on muscles and senews would cause constant pain, often spreading to the neck and down to the hips.

Technical limitations are another problem to consider. How much heat does a gattling gun produce? How can the heat be diverted from the body? Where is ammunition stored?

The actual usability of such a gun is also questionable. To aim a gun you have to visually line up some kind of marking (scope, sight, notch and bead) with your target. Your arm-gun would have to be designed to allow visual aiming or be connected to an ocular implant to allow for computer aided aiming.

I think in the end a hand-like prosthetic with an integrated (hidden) gun with limited ammunition would be realistic and could provide some interesting plots. Anything bigger would cause physical problems for the bearer and would make friendly interactions with strangers impossible ... Not to mention commercial flight

This gun would not be practical

TL;DR: Recoil and pure weight would make this gun very hard to handle and inferior to smaller arms

As other answers already covered the problems of the weight of ammo and heat produced, I will focus on recoil.

All of the following data comes from Wikipedia and assumes the slowest fire rate of 2000 bullets/minute of the M134 Minigun.

So the recoil (nearly 8 times as high as that of an AK47 on full auto) of this thing will make it very unprecise and hard to handle, even when firing only in short bursts.

Also as it seems he has the magazine mounted directly to the gun, which would weigh in at approxiately 7 kg assuming it is loaded with 200 rounds. Holding a total of 12 kg attached to the lower part of the arm when holding it in front of the body like seen in the images will also prove quite exhausting.

Also delay and sound from spinning up will make it unusable for surprise attacks. The gyroscopic may also affect aiming but the effect should be negotiable compared to the issues with recoil.

Here is a video of a minigun with supposedly similar specs being fired from the hip:

It can be seen that it is possible to fire it, but only with a solid stance and an external magazine for longer firing times.

One could imagine a person carrying a 1000 round magazine in a backpack and and the gun on the hip like in the video but the low mobility due to weight and bulk would make this still an easy target.

4
The practicality of mail armor cloaks
3
The Palm Buckler (Blocking With Anterior Arm)
28
Practicality of chainsaws as weapons in the medieval-ages and how to improve them?
3
Justification for Gatling type Coil Gun
49
Could a mouth-mounted gun be fired without damage to the shooter?
5
The practicality and feasibility of a fully-submersible aircraft carrier
8
Compact Arm Gun Prosthetic?
3
Could the gatling gun of the civil war be made smaller for individual use?
4
How to justify arm mounted weapons on powered armor