How to evolve a reptile into a wyvern, 100 million years in the future?

First of all I would like to precise what my species of wyverns actually are. I do not plan to make them huge and gigantic like in many fantasy worlds. Instead they are rather small and can be the size of a cat at most. And they do not breathe fire as they are part of a rather realistic futuristic Earth. These wyverns live relatively around the world (mainly in Antarctica) 100 million years in the future (Antarctica drifted towards the equator and got some of its rainforests back)

I would also like to note that humans no longer exist, thus any future evolution is not caused by humans.

Wyverns could potentially exist as a few traits like large leathery wings and the simple idea of a large flying creature has already been seen in nature. However these wyverns, being reptiles after all, have to evolve a few traits that would separate them from other reptiles before becoming a flying creature.

If I understood correctly, evolution is not really that hazardous. It depends on the environment and heavily influences natural selection. For example whales "returned" to the sea because of the opening of a new "niche" with vast nutritional resources, thus the early cetacean ancestors swam back into the sea and evolved into whales, dolphins etc.

In 100 million years many modern animals went extinct (such as most land mammals, birds, virtually all marine mammals, most shark species, turtles etc.) due to the "Sixth extinction" (I'm not gonna bramble about humanity being the cause or something else). And now begs the question.

Since my wyverns are descendent from modern reptiles, and replace the niche left open by extinct predatory birds (eagles, falcon etc.) in this scenario, how can wyverns evolve? Can large reptile species like monitor lizards be the likely ancestor of these wyverns? And what would drive them to "take to the skies", to maybe fill up the niche left open by predatory birds?

Redo the evolution of flapping flight in birds, starting with a lizard.

The ancestors of birds ran on the ground and liked to get up into trees and elevated sites. A new theory of the evolution of flight holds that the traction against the ground provided by nascent wings let these bird ancestors get traction on steep surfaces and even vertical surfaces like tree trunks.

Wing-Assisted Incline Running and the Evolution of Flight

Adult birds fully capable of aerial flight preferentially employ wing-assisted incline running (WAIR), rather than flying, to reach elevated refuges (such as cliffs, trees, and boulders). From the day of hatching and before attaining sustained aerial flight, developing ground birds use WAIR to enhance their locomotor performance through improved foot traction, ultimately permitting vertical running. WAIR provides insight from behaviors observable in living birds into the possible role of incipient wings in feathered theropod dinosaurs and offers a previously unstudied explanation for the evolution of avian flight.

The ideal wyvern precursor would be a fast lizard that liked to get up into trees, ran on the ground and reared up onto just hind legs when it ran (freeing the forelimbs from running duty and allowing them to help in other ways). The basilisk lizard is the only one I knew of that fit these criteria but it gets so much love. Probably because they can go across water and they look cool. 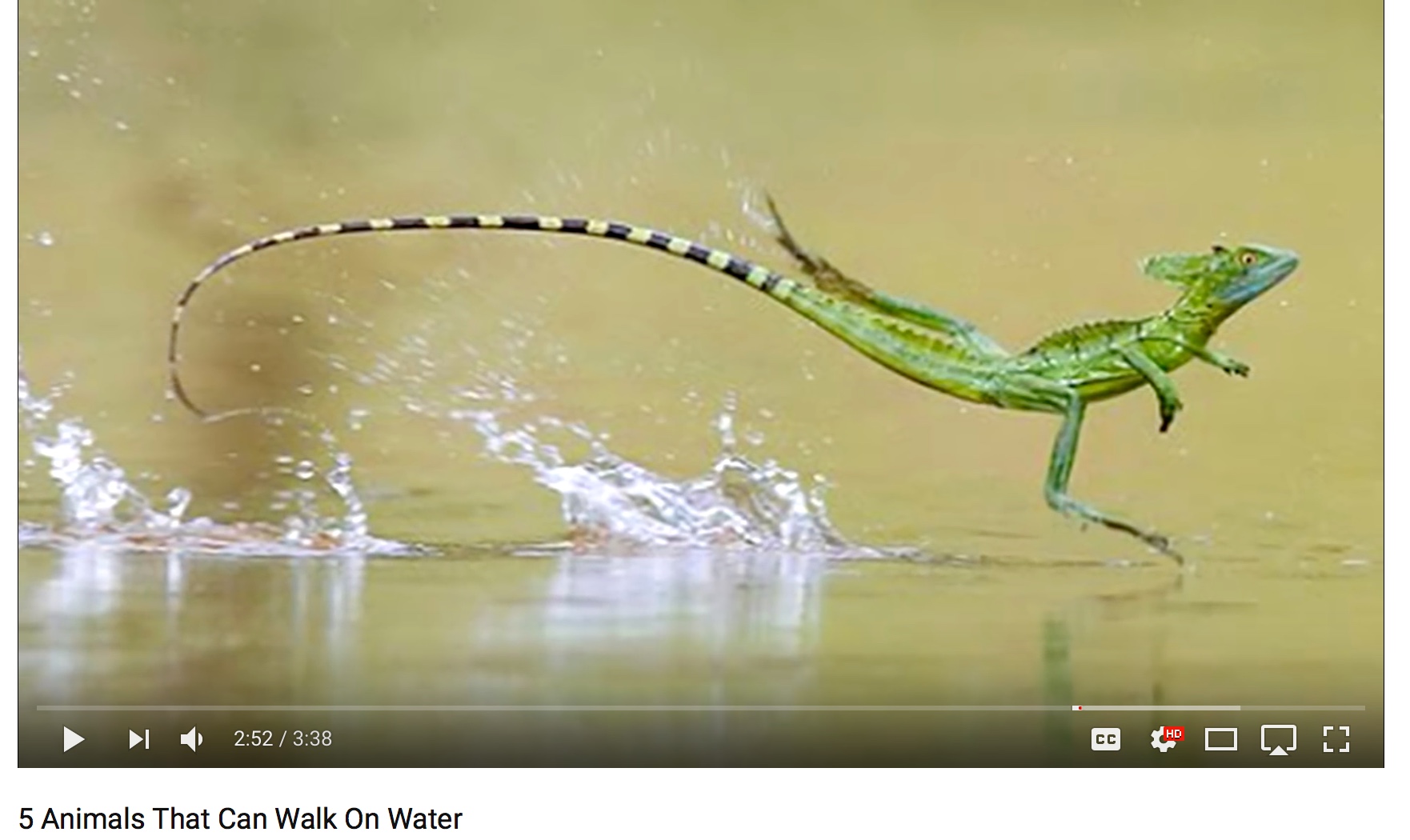 But looking around I found that Australian dragon lizards (good name?) also rear up on hind legs to run.

Clemente admits that when he started, he thought that the lizards would fall into one of two groups: lizards that mostly ran on two legs, occasionally resorting to four, and lizards that never reared up. Not so. Even the lizards that he'd never seen on two legs in the wild managed an occasional few steps on their hind legs. In fact, the lizards' propensity for running on two legs seemed to be a continuum; the reddening sand dragon and bearded dragon spent only 5% of the time supporting themselves on their hind legs while Gilbert's dragon (L. gilberti) spent 95% in this posture.

You can find running basilisks everywhere on the web. A bipedal running dragon lizard was hard for me to find.
http://www.californiaherps.com/behavior/lizardlifehistory.html 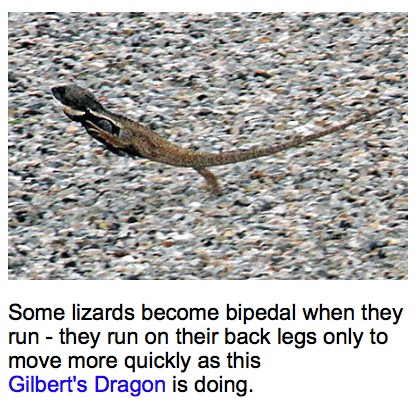 In any case these lean quick reptiles make very plausible wyvern ancestors and you can imagine how the power to flap could help them as they currently live. There are some pretty large species of dragon lizards if you want your wyverns to start more substantial, or you could have them evolve flight as small creatures and then get big from there. Either way, 100 million years is plenty of time for the wyverns to radiate into all niches that the birds now occupy. And some they do not - after your readers are used to flying wyverns, the appearance of a mighty sea wyvern will wake them up.

Keep in mind that evolution is not directed: it has no specific end goal in mind (well, perhaps "continuation of the species"), much less any specific traits it is aiming for. Mutations are real, but selection largely has to work on existing genetics and variations: you're not going to spontaneously have a species develop extra arms without shattering suspension of disbelief.

Your best approach, I think, is going to be a multi-step process, starting with choosing your initial creature (a snake, a lizard, whatever), then figuring out the traits of your desired final creature (a wyvern). Mark any differences, which as far as I can tell mostly amounts to the wings, then look at existing species with those traits and try to find out when those developed. Look at the evolutionary pressures that selected for each of your key traits; for one example, as others have mentioned, you'll probably have long leapers eventually transitioning into gliders and then fliers (I would recommend a mountainous environment with lots of ravines and crevasses to jump over). Then, try to construct a plausible history that your initial creature could have endured in your timeframe (which should be larger, the more drastic the changes are, but 100 million years is plenty for just about anything to be believable).

This is a general process I'm giving you here, and I understand that it's a fairly significant amount of work and research. But then, if you're trying to make for scientifically plausible evolution over your time period (instead of just assuming "yes, I gave it lots of time, so it could happen" without details), you probably are already willing to sink some time into this detail work.

Take some kind of reptile that is jumping or leaping and if it is an advantage it may be growing skin on its front legs to glide further until it can use this to fly.

The wyverns evolved to out-compete their only competition other wyverns

It’s simple. just another mass extinction level event that made wyverns the dominant species. Could be lots of wyverns types that exist around the world (some that can’t fly some that are massive as houses ect) hell the wyverns that you talk about could have evolved to fly to get away from their own kind that hunted them. They are just the new age dinosaur use that as your guideline. With good details and lots depth your world will be filled with much wonder and awe

for this just watch https://www.youtube.com/watch?v=Gnt5wIVjFS0 , he uses dinosaurs, especially yiqi to explain plausibility of dragons like wyverns

7
How to evolve fully terrestrial sharks, 100 million years in the future?

1
How could different species evolve into anthropomorphic beings?
5
Where is it most likely that an hexapod creature branched from the evolutionary tree
32
How to evolve/justify pescatarian elves?
0
Is the evolution of my aliens realistic?
7
How to evolve fully terrestrial sharks, 100 million years in the future?
11
Viability of Scansoriopterygid wyverns
3
How Would a Filter-Feeding Marine Turtle Feed?
3
Can reptiles evolve like primates?
2
Could bats become apex predators while retaining flight?