Music Dragonfly via Perforations in Wings

I'm designing a prehistoric-dragonfly that has little holes or perforations in its wings. When the wind flows through them, they make music (the viability of flying with these wings will be covered later.)

By prehistoric I mean a dragonfly the size of a hawk, with a slightly more complex, modified circular-respiratory system to allow it to get the oxygen it needs.

How could this dragonfly make "music"? Certainly music isn't possible, but could musical notes be produced by these wings? Would the holes affect them?

Requirements (please include in your answer):

Thanks to all in the Sandbox for helping me develop this question.

The holes could work similar to a hole tone whistle, which is the principle used for a whistling tea pot. 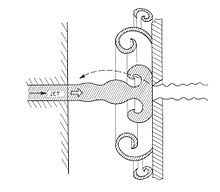 The basic idea is that a stream of air is directed through one hole, and a short distance away is another hole. Some of the air is forced out through the second hole, while some is forced to the side and swirled back to create the needed feedback loop.

The holes in your dragonfly wings could have a similar structure where there is a hole on the bottom surface and a hole on the top surface, and a bit of an air gap in the middle.

Each individual would have a different sound depending on the size and placement of holes, the size of the air gaps, etc.

Likewise the sound of the notes would vary depending on wing speed.

If they don't have to be holes, you could go for something like a cavity whistle, where air is forces over the top of a cavity in a surface.

The wings would be structured in such a way that when it beats air is forced to pass over cavity structures on the surface, causing the tone.

Little extra: It wouldn't sound like a bird chirping, as a hole tone would be a pure sound as long as the flow of air is constant, but because of the wing beat speed, wing angle, resonance from cavity tones as forward momentum causes air to also pass over the tops of the holes and not just through them... I believe it would be a constantly fluctuating sound, but that the creature would have some degree of control over it.

Not the answer you're looking for? Browse other questions tagged science-based biology creature-design audio .

19
Could this Very Specific Dragon Fly?
8
Adaptations of a Very Specific Dragon to this Combination of Large Size and Flight
3
How to make this species with specific constraints regarding reproduction viable?
7
Human Dragonfly Wings
3
Dragonfly Goggles
7
Metal-Feathered Macaw Viability Part 2: Best Wing Shape?
7
Giant bug noises
4
What's the scalability of this flying strategy?
5
How many notes can devils play with their horns?