How does a time travel paradox actually begins?

A while ago I was conceiving a story about a guy that actually creates a method for viable time travelling but gets stuck in a paradox after using the machine.

The background story for this is that this guy is a scholar in some tech university that has always been fascinated by the concepts of time travel. He spends some 10 or 20 years trying to find the solution until some older scholar gives him the missing bit of information that sparks his great invention.

To sum things: He builds the machine, travels back in time and realizes that he was the older scholar that gave himself the missing information needed for the machine to exist.

The main idea of a paradox is that it contradicts itself so... he invented the machine because he came back in time and gave it to himself. But he could only do that because he had the idea already, which came from himself... and the loop goes on.

I want to know when/where/how/why it began.

For this answer you can use any paradigm - parallel universes, causality or whatever else you can dig up.

The only constraint is that you CAN'T contradict yourself - i.e.: you have to obey the paradigm's rules.

You CAN mix paradigms but if you do, be sure to state which paradigms you are using and respect both their rules (so if you go to a parallel universe, change stuff, come back and things are different in your home universe, you're doing it wrong).

Feel free to use high sci-fi/fantastic elements (like I did in the second question), as long as you can be coherent in your explanation (yes, you have to explain how the entity's "powers" work) - but I would prefer "science" to be the answer.

If a time machine does allow for changing history, it's easy to imagine how to compute it; you could easily write a computer program which would simulate that universe and its time travel, given sufficient computing power. You would store the state of the universe in RAM and simulate it under the programmed 'laws of physics'. Every nanosecond, say, you'd save a copy of the universe's state to disk. When the Time-Changer was activated at 9pm, you'd retrieve the saved state of the universe from one hour ago at 8pm, load it into RAM, and then insert the Time-Changer and its user in the appropriate place. This would, of course, dump the rest of the universe from 9pm into oblivion - no processing would continue onward from that point, which is the same as ending that world and killing everyone in it. 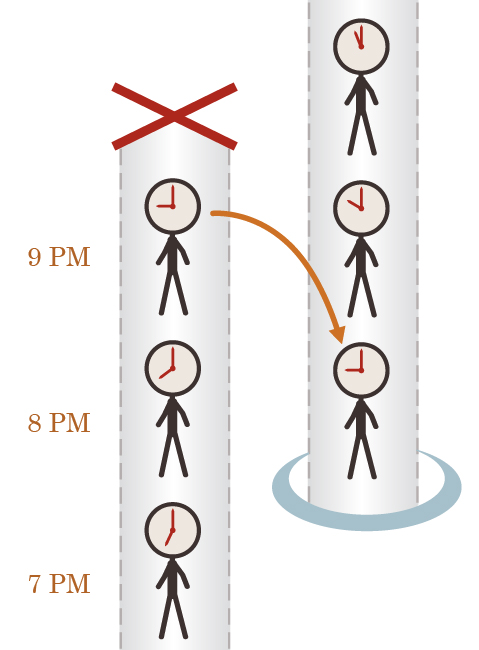 Still, if we don't worry about the ethics or the disk space requirements, then a Time-Changer which can restore and then change the past is easy to compute. There's a perfectly clear order of causality in metatime, in the linear time of the simulating computer, even if there are apparent cycles as seen from within the universe. The person who suddenly appears with a Time-Changer is the causal descendant of the older universe that just got dumped from RAM.

So under this system let's look at your "paradox"

he invented the machine because he came back in time and gave it to himself. But he could only do that because he had the idea already, which came from himself... and the loop goes on.

But let's imagine a scenario. The first time in "metatime" he invented the machine but it took even longer...., the first time the old scholar was utterly decrepit but once it was built he went far back in time and gave himself a clue and so it didn't take him very long at all to build the time machine by comparison and he realizes he needed the hint so he goes back to give himself the hint.

In "metatime", the computer simulating the universe and from the point of view of anyone watching the simulation, there's a clear chain of cause and effect but within the universe it looks like the needed hint about time travel came out of nowhere.

Unfortunately he's now stuck in a loop because when he goes back in time the future he was in gets dumped and the only way to travel forward in time is the slow way and when his younger self travels back the universe as it is gets dumped for the version from years before leaving the universe in an infinite loop until the admins step in to do something about the time machine and how it's being used.

Actually no. This paradox does not contradict itself. His earlier version is instructed by his older version who, of course, only remembers and knows it because he taught it himself.

This is a causal loop. It's a loop because causality flows around it as if it was a circle of events. Each event causing the next one, until we go around again.

This model of time travel works best if we assume the events and the causal loop are part of a deterministic universe. In which case, there is no paradox, there is no contradiction, events merely happen the way they always happened. That's all.

There IS a paradox here; what is the source of the key information?

Perhaps thermodynamics can offer a quirky but consistent solution:

Sci: Normally, as time moves forward, the universe decays into a state of greater and greater entropy.

Sci-fi: However, when the direction of time-travel is reversed, so does the "decay" into entropy. Instead, the reverse-time-traveler experiences the opposite, a growth of "order". It is this decrease in entropy, and growth of order, from which the key-information arises. (The "order" that arises, is in the FORM OF that key-information.)

Consistency problem: If the reverse time traveler starts his travel, already having the information, nothing APPEARS to be GAINED during time travel.

I don't have a good solution to this yet other than it's just an "optical" illusion, but I would suspect quantum mechanics, particularly "entanglement" will be involved: check out the delayed-choice-quantum-eraser experiment (real sci). I'll assume you are familiar with the double-slit experiment? In this version of that experiment, they were able to change whether the particle went through one or two slits AFTER it has passed through them! Or, at least it APPEARED that way. (this is a super simplified explanation of that experiment, and they don't actually use slits and particles, they use photons and optical equipment.)

How could this happen? How did the "first" time-traveller manage it? Which came first, the chicken or the egg?

Rather than thinking of a consistent infinite loop, think of an evolving loop - i.e. the actual solution to the chicken and egg problem.

Let's say our scholar spent 20 years working on time travel, that brought him to aged 44 (assuming he finished his physics degree at 22, read A Brief History of Time and continued his studies from there). But as yet, he is still missing the one piece of the puzzle, and without a future self to pass it down to him, it looks like he never will.

But he still has about another 40 years because he's a persistent fellow. Aged 84, he's on his death bed, and has solved that secret to a great degree, but he's not quite there yet. He regrets wasting his entire life on this fruitless pursuit. But it occurs to him then that one possible solution could allow him to travel back, but by a very short amount just one day.

Well one day is better than nothing so he uses his remaining strength to go back and gives his one-day-younger self the secret, before falling over dead. Now he has a whole extra day to think about it, and he has the (beginnings of) the solution! So now, with a bit of a boost, he mulls it over in his mind, and realises he can improve the solution to allow him to go back a week (or maybe 2 days - this can be as drawn out as you like), now giving him even longer to perfect it.

So with each iteration of the loop, he further develops the science and technology, until eventually he can go all the way back to aged 44 to give himself the secret.

Of course, he, aged 44, after realising who the wise visitor is, knows that he too must go back to himself aged 44 in order to "stabilise" the loop. He decides that 44 is a good age because he has put in the work to become an learned temporal physicist at this stage and has reached the point where just this secret is all he needs to complete the puzzle. Any further back and he would have difficulty understanding the concepts which he feels he must learn for himself.

One possible solution is that it only appears to be time travel, and isn't time travel at all. What the older professor has invented is a way to skip East or West one parallel universe to take the terminology of Terry Pratchett and Stephen Baxter's Long Earth.

It only appears to be time travel because the difference between one parallel universe and the next is that each one started X amount of time after the other on some sort of trans-dimensional calendar. Lets say that the further East you go the earlier in local time you get (after all, the sun rises in the East so it's pleasingly poetic).

So what we have is 'time travel' invented in Datum Earth, and then propagated to East 1 (or East X, depending on how many parallel universes he's jumped over).

You could easily use this exact same architecture to describe time travel proper as well if you just substitute 'parallel universes' for 'timelines', although the difference there is probably little more than semantic.

Fun with possibility and probability

One way to solve this paradox is with possibility and probability. In this scenario the first thing that needs to happen is at some point the scholar needs to be able invent and implement the last component at some point in his life. If this is possible, then it becomes possible that he can jump back in time and give the information to himself. Since that is now possible, there is now a probability of him coming back in time to give himself the answer and the event may spontaneously occur. It is unimportant that he actually invents the solution himself in the later timeline, he just needs to be capable of inventing it at some point after being given the information if he had been left undisturbed.

Not the answer you're looking for? Browse other questions tagged science-fiction time-travel time-manipulation .

21
Determining your universe's Time Travel Paradigm
11
Command and control structures in a war where time-travel is possible
10
Santa is a time traveller. How does he not violate causality?
26
Temporal Ethics for bidirectional time-travel with branching time-lines
30
How far back in time would Maths be understandable to a modern mathematician?
3
What happens to time orphans in mutable history on further time travel?
5
(Please Someone Explain) Is time travel using wormhole as portals possible logically?
64
I travel back in time: how could I know when I landed?
32
Can a world where everyone has a time machine be consistent?