Is it possible for an organism to convert magnetic radiation into a sustainable energy source?

For backgrounds sake, let's say that there are large, and I mean large beings living underneath the icy surface of Europa. Now consider this excerpt from NASA's page on Europa:

One of the most important measurements made by the Galileo mission showed how Jupiter's magnetic field was disrupted in the space around Europa. The measurement strongly implied that a special type of magnetic field is being created (induced) within Europa by a deep layer of some electrically conductive fluid beneath the surface. Based on Europa's icy composition, scientists think the most likely material to create this magnetic signature is a global ocean of salty water.

Is it feasible/possible for a large, water-borne organism to harvest and convert the magnetic force generated by the moon/ocean itself into a sustainable source of energy?

How do we use magnetism to create useful energy? If a conducting object is in motion relative to the magnetic field, an electrical current is produced in that object. The current produced gives rise to a magnetic field that opposes the external magnetic field. This is electromagnetic induction. 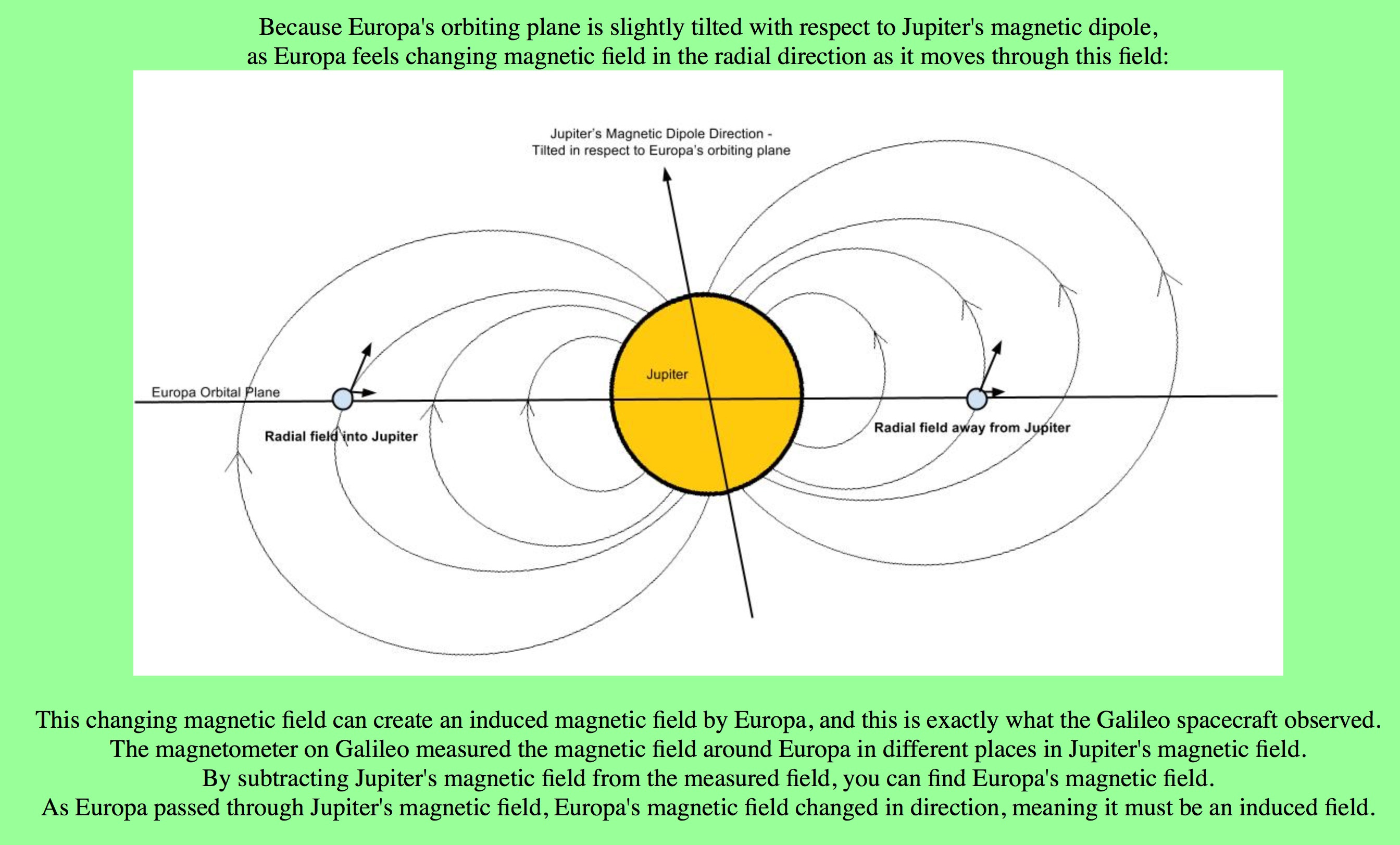 Your creatures could move through Europa's magnetic field and generate a current within themselves. But even better - ride Europa through Jupiter's magnetic field (which they sort of have to do since they live there). Jupiter's magnetic field will induce currents within these creatures just as it induces currents within Europa. The relative movements of Jupiter and Europa do all the work. An electrical current is powering this computer; it is fine energy for your giants although you will need some creative biochemistry if you want to really get in the weeds.

Magnetic fields, such as those generated by (say) the Earth, or Europa, are static. They do not impart energy to non-moving objects in their vicinity. The way you harvest energy from a magnetic field is to move an object through it - and in so doing you're harvesting energy from the movement, not the field; the field does not lose strength.

One situation where energy can be harvested from a magnetic field without much movement is if the magnetic field is rapidly oscillating. This is how induced magnetic fields work, but generating any substantial energy requires truly rapid (kHz) oscillation, which simply does not happen on a planetary scale.

As an additional note, magnetism is not radiation. No particles or waves are emitted by a magnetic field.

In a static magnetic field, no.

It would be like trying to live on just gravity. Eventually you would simply run out of potential energy (ie hit the ground), and you would need another energy-source to keep the system going.

However, if the magnetic field was fluctuating somehow it could be done, much in the same way that you can harvest the tidal forces from the gravity of the moon. keep in mind that you would still run out of potentional energy eventually, it would just take a lot more energy to do so. Why on earth Europas magnetic field would sufficiently fluctuate though is beyond me

Not the answer you're looking for? Browse other questions tagged space aliens energy radiation .

16
Energy source for a generation ship
6
Is it feasible for an organism to feed off cosmic radiation?
6
How could living cells harness nuclear radiation for energy?
3
How to transform a cells energy source into explosives
3
Is it possible to create an organism that is completely immune to radiation?
3
Could Atlanteans harvest energy from brine pools or convert them into dump sites?
2
Best method to convert gamma radiation to electrical or any other form or energy
9
Possible methods to convert gravitational waves into storable energy?