I'm making a game which takes place in an asteroid field that is very dense - I'm talking close enough that one is able to jump between asteroids (provided you have some sort of additional thrust behind your movements). These asteroids range in size from about the size of a house to a few kilometers in diameter. Is this actually possible? If not, what sort of sci-fi excuse can I present to account for this anomaly?

Some additional information: These asteroids have enough gravity to pull objects towards them (asteroids of a few kilometers in diameter have about the same gravitational pull as Earth for gameplay reasons), and they are static (they don't move. This is mainly because you'd need a NASA super-computer to calculate all ~5000 of these guys on screen at one time).

Edit: Thanks for the answers! Seeing the top post gave me an idea for how it will work. It's likely that I'll have it take place quite a while after a planet or moon got shattered; long enough for fragments (asteroids) to begin merging inwards, but not so long that they would form together or anything. Once again, thanks for the help with this! I'm not much of a physicist myself, so the outside perspective was quite helpful. And as for whoever suggested adding the magic tag, that was actually one of the options I was considering up until now ;)

Over a long time period, a dense asteroid belt is unsustainable.

However, that's over a long time period. Over a "short" period of time, a large number of asteroids can hang out in the same place for a while. Since the high gravity is "gameplay mechanics," we know that the asteroids are normal density and gravity. That's not very much.

You're looking at something like "A rogue planet traveled through this system a dozen years ago. As it did so, it passed close enough to a moon to scatter it."

Not a direct answer, but does it have to be an asteroid belt? What you are describing sounds a lot like Saturn's rings. There the particles are smaller and closer together, mostly the size or rocks with a few meters between them. It wouldn't be hard to imagine a ring formed from a moon being ripped apart more recently where the particles are proportionally larger but also proportionally further apart, which would put them pretty close to the sort of size/distance relationship you are looking for.

Check out this "Planet Walkers" scheme.

The problem with having your little asteroids have gravity adequate to hold a player is that they wouldn't. But they definitely could accumulate electrical charge from bumping and grinding on each other and that charge could hold the player. Charges could attract or repel through a vacuum causing the asteroids to jiggle relative to each other. Your asteroid-hopping player could have an "e-flyer" which I took across from the linked idea. 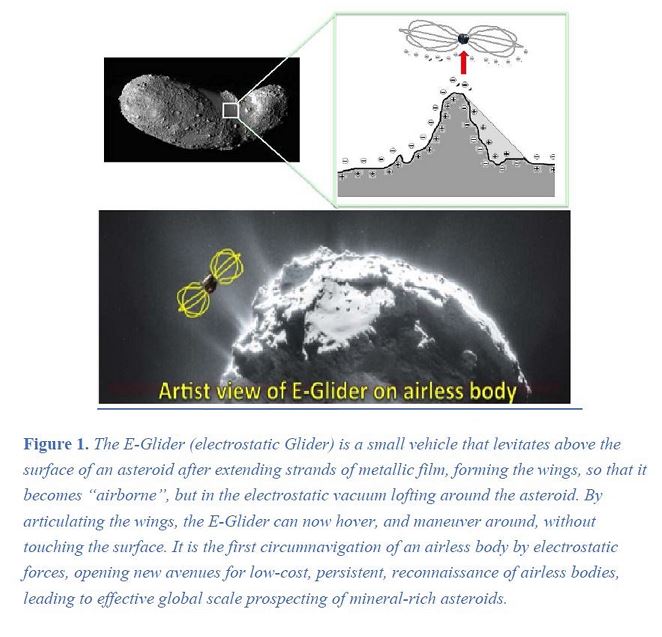 Maybe you could turn your charge intensity up or down according to how far you want to hop. Some asteroids might have a lot of charge and behave unpredictably when approached - save those for the upper levels.

As regards the prospect of super dense chunks hanging together for a while - maybe. You can lose a lot of time looking at the Cassini images of Saturns rings. Probably when a couple of those minimoonlets whale into each other there are a lot of big chunks in the vicinity at least in the short term.

I'm gonna say impossible, but I can't put a lot of numbers on that with this info. If you'd like to define "jumping distance", I can try to get a sense of how quickly this system would collapse.

If the surface gravity is 1g with a diameter of a few km, within a very short period of time you're looking at a single aggregate asteroid due to gravitational attraction of neighbors, especially if they're close enough to jump to.

As an exercise, try drawing up a free body diagram of three asteroids with different masses and spacings on a sheet of paper. Once you figure out that 3-body 2D version, try doing a 3D version of these free-body diagrams with a half-dozen such asteroids, which is a slightly more realistic model. The latter significantly harder because each object exerts a gravitational force on each other object. With n planets, each planet has n-1 3D force vectors acting on it that need to cancel to zero

You could get around the cancellation of gravitational force vectors with orbits, but it's not** going to be stable. While you could argue it doesn't need to be, if the asteroids are jumping-distance apart and have the gravitational attractions you've described, they're going to agglomerate quickly. And with objects that dense, when they do, there's a LOT of kinetic energy and momentum that would make being in that neighborhood really*** unappealing

**Realistically, given how complex our solar system's stability is.

***Well, for me. But maybe you're really into cosmic-scale billiards

Not the answer you're looking for? Browse other questions tagged science-fiction physics space or ask your own question.

29
5km artificial planet, with same gravity as on Earth
8
Can I have a very dense asteroid belt ring around a star?
0
The Planet Walkers - Feasibility

4
What influences Trojan Asteroid density?
4
Effects of a super-Jupiter collision in a planetary system
6
Two orbits, Four habitable planets in the goldilocks zone?
57
How would someone hide an asteroid in the void of space so only they could find it?
4
Can this ship exist within our current laws of physics?
8
How can I make a dense asteroid field?
7
How would our skies look if our sun was a white dwarf instead?