How large could a planetary diamond be?

Realizing that this would mean a diamond of planetary size, she went to Magrathea and ordered it there. She had only two conditions: It should be a perfect single-crystalline diamond, and it should be impossible to make a larger one, because trying to do so would make it stop being a perfect diamond. Of course, Magrathea delivered what was ordered.

Now as long as the diamond planet was in the hyperspace construction halls of Magrathea, all natural laws could be effectively put out of force as needed, but as soon as the planet was put into normal space, it was under the full force of the laws of physics.

Now my question: How large was the diamond which was ultimately delivered by Magrathea?

It certainly would not be either of those values, but between them, closer to the upper end. I'll say just under 500,000km in radius. About 0.72 times the size of the Sun.

It would be about 1.3 solar masses of diamond. Large enough that it doesn't begin the CNO cycle. This is also assuming that the constructed nature of the planet means it does not have extreme temperatures at its core.

The mass is the easier part. The compression of diamond is the hard part.

It's the least compressible material known. However, in a recent study it was pressurized up to five terapascals. Turns out, it does compress. 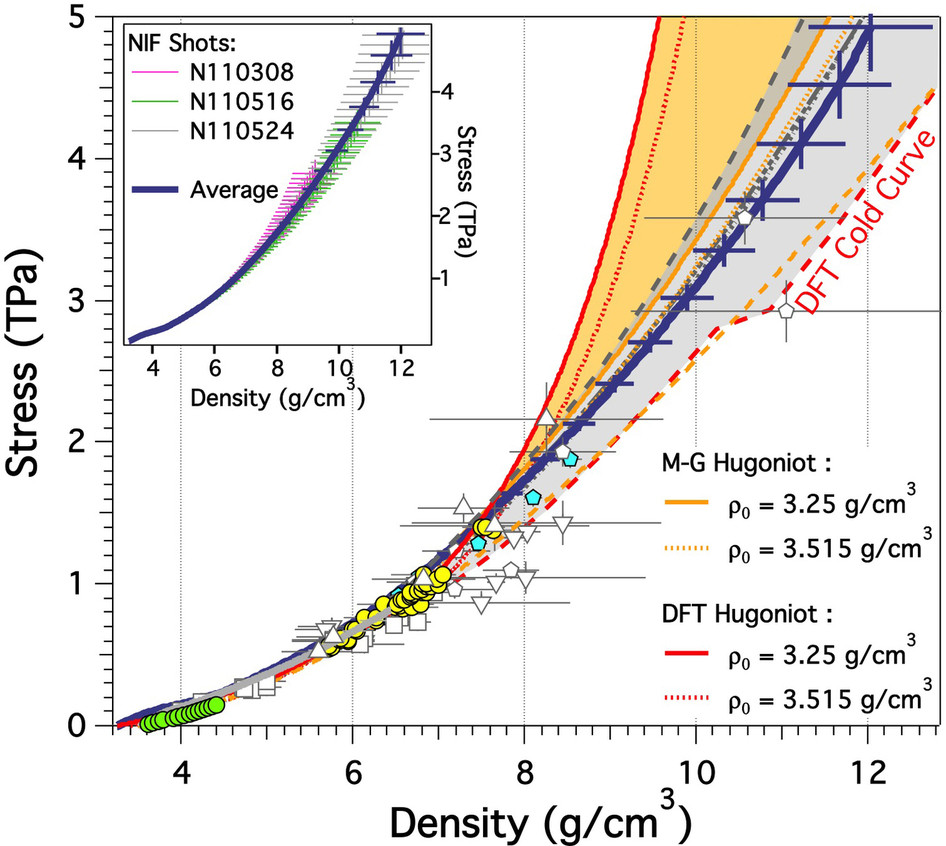 Just over one solar mass of carbon would have an internal pressure of about 70.96 terapascals. We don't have data for what carbon does at those pressures. However, at five terapascals is compresses to about three times its standard density. With some very dirty street-fighting-math we can extrapolate the polynomial and guesstimate that, at 71 terapascals, the density will be up to $38 {{g}\over{cm^3}}$.

I think the answer is significantly smaller than you may think...ultimately a diamond is not the most compressed form of carbon.

In 2014 an experiment to recreate pressures at Jupiter core was preformed...

“At progressively higher pressures, the carbon atoms will change their configuration,” said Smith. “At over 10 million atmospheres of pressure, the carbon atoms are predicted to rearrange themselves so they would no longer be in a diamond structure, but rather they will assume a different [higher density] structural arrangement. It will still be carbon, but, so the theory predicts, the crystal structure and the mechanical and chemical properties will be different.”

Jupiters core see's 100 million atmospheres of pressure...which actually should compress the diamond into some other form of carbon that is not diamond. This puts the upper mass of about 1/10th the mass of jupiter before the diamonds structure beings to collapse into something else at the center of the massive gemstone.

With a density of about 3 times that of Jupiter, you are looking at a diamond about 1/30th the mass of jupiter, which is still around 10 times that of the earth.

I get a sphere with a radius of about 7,970 kilometers, or about 9,905 miles in diameter. This is about 25 percent bigger than Earth, in both diameter and mass.

I think a point has been missed. As Samuel points out, diamond is compressible, with an increase in density of roughly 10 at the center for 1 solar mass. As this increase in density implies a reduction in volume, the whole diamond will experience significant gravitational heating as it settles into its new dimensions. And although the thermal conductivity is very high, I suspect that the core temperature will undergo significant increase. This would obviously decrease the upper limit on mass before the CNO cycle kicks in. Furthermore, since the compression varies with depth, I'm not entirely certain that the monocrystaline character of the mass would be preserved.

80
Can stars that are not powered by nuclear fusion exist?
-4
Two consanguineous human princes (same father and mother). How far apart in age could they be?