I'm creating a developed country in South America with its development similar to that of Canada or Australia (little behind the US). See the map below - the white line surrounds fertile and populated areas. 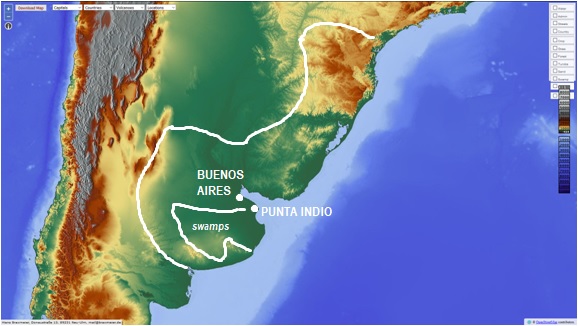 Its capital had always been in what is now Buenos Aires (which is also actually the capital of Argentina) thanks to its extremely strategic location.

But with the advent of railways in 1830s-1850s I wonder whether to build a new seaport and (maybe a new capital) city in Punta Indio - an uninhabitated and swampy site located 130 km (80 mi) from Buenos Aires toward the ocean.

The reason is that the ships wouldn't need to go so much inland anymore. But instead, the goods and the passengers would transfer from ships to trains in Punta Indio because trains were much faster than ships. Also, it would be much closer to Montevideo, another country's very important seaport.

Another good reason is that Punta Indio has much milder climate than hot Buenos Aires thanks to proximity of cold ocean currents. And that affects human workforce efficiency considerably as well.

But how about the ship vs train transportation cost and the overall efficiency of this plan? 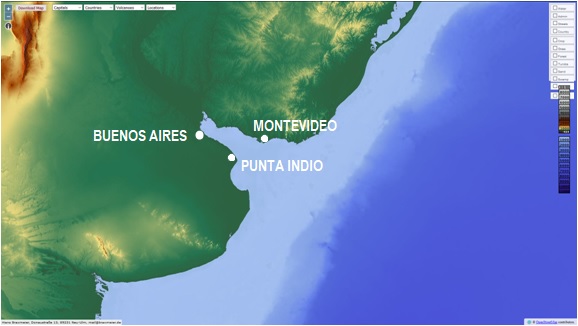 The time savings are not so very great. Punto Indio is about 100km down the coast. A ship of the 19th century can easy go at 20km/hr or more, even allowing for travelling slowly on the approach to port. So it would take less than 5 hours. The train would take a couple of hours, so you have a net saving of maybe three hours. The boat is carrying goods from Europe, North America or East Asia, and has been on the sea for a month or more. Is the three-hour saving worth it?

Another problem is the lack of a natural harbour at Punta Indio, one could be build, but there is no river to adapt into a set of docks.

While ferry trip from Punta Indica would be shorter. Even now it is quicker to take a ferry over the bay.

New Capitals are built for political reasons, whether you look at Washington DC, Brasilia or Canberra, the motivation was not "better sea links" but a mixture of national pride, a compromise between existing cities and sometimes a desire was to move the capital inland to protect it from naval attack. The only example of a city that was moved to the coast is Lima, and there were other reasons behind that move.

So design a political justification for moving the capital, and you have a more convincing backstory.

I have tried to find some numbers to stick with this for you, at least something to give you an idea of the magnitude but my Google Fu isn't up to it tonight.

In addition to the other answers, one reason to favour shipping over rail is the simple factor of bulk. Loading and unloading ships has always been one of the greatest bottlenecks in the transportation industry, and it was far worse in the era you are thinking of since innovations like standard pallets and ISO shipping containers have not been invented yet. Loading and unloading ships was a manpower intensive process of bringing individual boxes, barrels and other items into or out of the hold, down the gangplank and into the warehouses for further processing or shipping to inland locations. Bulk cargo like coal, ore, sugar etc. required a lot of handling as well.

Bulk breaking is always something to be avoided as long as possible, so keeping everything on a ship and sailing straight to Buenos Aires saves far more time and money in the long run than sending it by rail from another port.

If anything, Buenos Aires is the wrong place for the Capital by this reasoning, looking at the map you see the confluence of two rivers flowing into the bay, shipping could proceed inland via ship or barge (and dredging the river in the manner of the Mississippi river would be a major project worth doing) 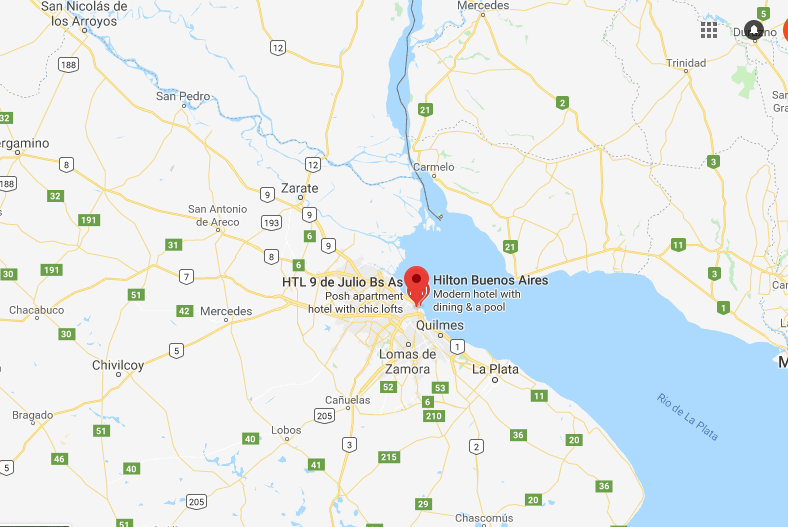 Allow me to introduce the economic and political capital of the region, the city of Carmelo.

Not the answer you're looking for? Browse other questions tagged reality-check alternate-history transportation or ask your own question.

8
What would the British have done in Argentina and the surrounding area if they had been victorious in Buenos Aires in 1807?
4
The Curtain Wall in the 19th Century
9
Could a 19th century setting support purely mechanical orbital satellite and manned orbital launches?
16
19th Century army standing against a Modern Army
6
How to explain electricity discovery and usage in 12th century?
8
Time Travellers And The Roman Empire, Part 1: Transport and Control
6
Woodpunk World- 'Super Wood' developed in the mid-late 19th century?
5
Can Magic Enhance the use of 19th Century Firearms?