What would happen to the Moon if it was lowered onto the Earth?

An absolute madman of a scientist tractors the Moon from it's orbit, and carefully lowers it through the Earth's atmosphere and gently brings it to rest upon the Earth's surface. There is no reentry, there is no impact. 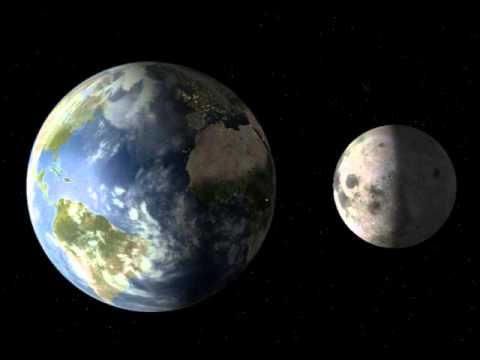 So we have two spherical 'planets' that are in contact with each other. Does the Moon slowly disintegrate due to the gravity, or would it be consumed rather quickly? How would this affect objects near the Moon? How would the shape of this new Earth-Moon potatoid affect things?

Even assuming that the above could be avoided, the potatoid resulting from joining the Moon and the Earth would put the rotation of Earth off balance, resulting in quite some vibration while the system rearranges in a new equilibrium position.

Both of the above are highly unpleasant for those tiny things on Earth which we call "life forms", which, being close to the Moon, fall under your question

How would this affect objects near the Moon?

The Moon would collapse for two reasons:

Just an illustration in my opinion: 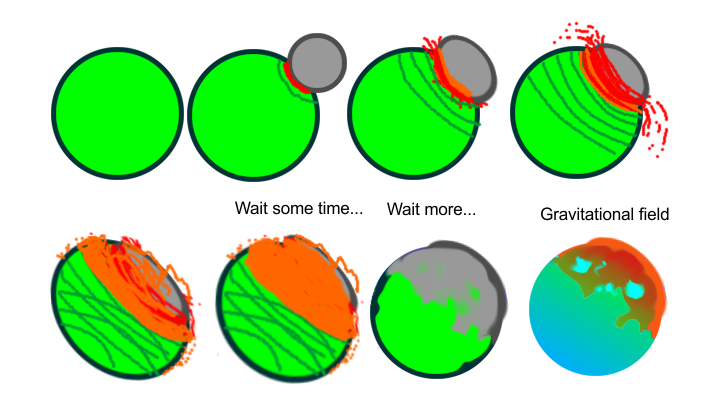 All its weight and the Earth's gravity will crush and squeeze the Moon, producing a lot of heat and earthquakes, and after some time, that part of the planet would be a lot higher than the rest, but not too much. Also, there will be a bit of gravitational anomalies (a bit exaggerated in my image).

Also, the Earth's rotation and angle will be affected due to the new Moon mass added to it. We could expect an important change in angle (with will affect stations and temperature) and day time.

P.S: Maybe I also exaggerated a bit the red and orange part, it will be hot, really hot, but no so hot.

The moon would collapse under its own weight this would be 'quick' moon standards but would take quite a while for humans a few minutes or so ( I can't give you a precise time as there is no clear end point really, the moon just turns into a giant mountain which gradually flattens out until the earth seems slightly bigger.)

Objects near the moon would experience its gravity but since the gravity of the earth is so much bigger you wouldn't be pulled up or anything it would just feel as if down was slightly off (though whether you'd notice that given that 'holy smokes the moon is over there what the hell' is up for debate). The newly added weight on the earths crust from the collapsing moon is probably causing earthquakes and volcano's to pop up everywhere. That being said you do probably have a nice view for your last few minutes until its obscured by collapsing moon dust.

Finally all life on earth dies of course the moon is big and as it collapses a lot of debris falls a very long way inputting a lot of energy into the earths ecosystem. Think asteroid that killed to dinosaurs but instead of 15 km across its well over three thousand (it's going much slower of course but that is not nearly enough sadly. Oh and most of the earth 's surface gets buried in moon rock)

Some very nice answers. I'll add one more that as the Moon was slowly lowered to the Earth, it's tidal forces on the Earth would have an effect. You'd get tides hundreds of feet high moving towards the moon. In some parts of the Earth you might see oceans withdraw from their shores to the point of no longer being visible. Other parts would find themselves entirely under water. Even before the Moon touches down, Earth would likely experience several large earthquakes from the tidal forces.

Upon touching down and being released to gravity, things would get much worse. It would take only about 15 minutes or so (1/2 a t^2 for the diameter of the moon) for the Moon to push its way into the Earth and that pushing would not be pretty. Even touching the surface the Moon would still have enormous gravitational potential energy, enough to probably leave half the Earth a molten lava mess and the other half shaken and broken and flooded beyond all recognition and the air would be unbreathable and a wild guess, the sky would be black - for a few years. And enveloped in water vapor for many years after that until the surface cooled. Lets not actually do this. It wouldn't be a good day.

A final point, it would be loud, and incredibly windy, but I'm not sure the loudness would matter as the Earth was shaking like you'd never seen it shake before.

Other answers described how this would destroy both Earth and Moon in short order. Assuming the mad scientist wants to avoid that (it would destroy the tractor beam, those aren't cheap!) there is a way to limit damage.

The tractor beam is able to change the orbital and rotational speeds of the moon. This is necessary to have the Moon immobile compared to the Earth surface. Any of those changes has to be acted on the tractor beam itself, as per Newton's third law. Assuming the tractor beam to be on Earth, it is probably acting on Earth at the same time to avoid being shot to outer space like a cosmic ray.

With careful changes of Earth orbital speed, possibly pushing against passing asteroids or distant planets to gain or loose momentum as needed, you may end up with a special configuration: a contact binary planet aka. Rocheworld.

In this case, the Moon is orbiting around at normal orbital speed for its altitude (1737 km, Moon radius), which is a tiny bit more than 7 km/s, completing one orbit in about 1 hour 35 minutes. To avoid friction between the Earth and Moon surfaces now in contact, Earth is orbiting at the same angular velocity. That is, one Earth day is now also 1 hour 35 min long. Which itself would have some interesting effects on climate and geology (and by "interesting" I mean "apocalyptic")

That way, the Moon doesn't fall on Earth as it is in orbit, and is kept in one piece by its own gravity. Similarly, it isn't gouging Earth at the contact point because Earth and Moon are moving in concert.

This will still cause massive earthquakes as the pull of gravity suddenly changed intensity pretty dramatically at places. Both Earth and Moon will also slightly reshape, meaning apocalypse-level earthquakes and landslides pretty much everywhere. Atmosphere will also rush to cover the Moon, as atmospheric pressure is everywhere more or less the same on a Rocheworld, and there is suddenly a 1 to 0 atmosphere difference to equalize. Longer term, atmosphere starts evaporating on the Moon side due to the weak gravity,

I am not sure a Rocheworld is stable with such a big difference in mass between the two parts, so the Moon may end up partially break apart to form a ring and partially fall down to Earth, which would reshape back as a sphere. Or it may stay as it is, with enough ground moving to the contact point to make a big contact circle - as matter settles until everywhere points down, that is with gravity being perpendicular to the surface, the contact circle would point sideways compared to either center.

It would still kill about every living thing on Earth and flatten most of its features, but at least the mad scientist would have more time to pack the tractor beam on a spaceship.

As LTK points out, the moon would lose its shape in minutes. (For example, the outer rim of the moon would take about 11 minutes to slam into the earth).

Effectively, the underside of the moon would start as a giant undercut cave. The shear strength of the moon rock would be incapable of holding the cave roof up -- especially since there would initially only be a tiny contact area to carry the weight. The moon would slump down toward the earth. The outer rim of the slump would slam into the earth as a giant ring of kinetic energy weapons (with an energy density about 3 times that of TNT).

The inner portions would hit the earth as a series of hammer blows. The outer rim would splash. The aggregate effect of these hammer blows would be a magnitude 17 earthquake, lasting 11 minutes.

Next, the nearly vertical sides would crumble downward and outward, away from the center of the 3500 km high mountain. The bottom side of the moon (and the surface of the earth that it landed on) would melt.

The liquid layer of the moon's core would be subject to a race: Would the extra pressure (from the weight of the "top" of the moon) squeeze out the liquid core before the extra pressure caused it to freeze? Whatever got squeezed out would (re-)melt. If the top of the moon fell in a balanced way, whatever did not get squeezed out would freeze. But the top of the moon might tip over, perhaps kicking out the solid inner core. As the squeezed-out blobs from the liquid core cooled down, they would gradually re-freeze.

Not the answer you're looking for? Browse other questions tagged space gravity .

7
Siamese Twin Planets?
9
Floating Pumice Road. Slab Size
2
What would an earth-sized world be like if shaped like Ultima Thule?

16
What would happen to the Earth if Gravity disappeared?
17
What would happen if the black hole at the center of a galaxy was removed?
19
How does gravity affect evolution of life?
8
What density can I set for Uium, to be reshaped by moon-mass black/white holes
3
What would be the consequence for the Earth if the moon's orientation was flipped?
4
No More Looking from the Same Side of a Mostly Liquid Surface Terrestrial-based Moon
2
How to explain the presence of a dense debris field around Earth?
3
How to place multiple small moons and one large moon in stable orbit around an earthlike planet?