Despite the streamlined appearance of submarines, it is actually difficult/expensive for them to travel at high speeds. Much of this cost comes from the drag that is induced by the speed itself. Consider this formula to calculate power needed to overcome drag:

My world assumes there is a strategic need for an extremely fast submarine. However, given the above equation, the power needed is a function of the speed cubed. To put it mildly, this exponential cost is not ideal for a defense department seeking to deploy supersonic submarines. For years, the war generals cycled through countless boxes of cigars and scientists had filled many a trash can with blueprints until...

Supercavitation was achieved by a scientist from my world. With a gas bubble enclosing the submarine, drag is reduced to a much more manageable level. There are a still a few kinks to work out regarding turbulence, but nothing the team isn't feeling confident about solving -- except for one glaring thing: navigation.

When at periscope depth, radar can be used as normal. However the majority of the time the supercavitation submarine will be at depths where sonar would normally be used -- which begs the question, what is going to replace sonar now that we have supersonic(in water) velocities? Such a fast vessel would have noise issues that might make sonar ineffective outright, but I'm still open to work-arounds if you truly think sonar is still viable.

Sonar, schmonar. Let us move this into the future.

1: We want active imaging: send a beam of something and have it bounce back to generate an image.

3: Electromagnetic radiation is no good - water soaks up the EM that is useful topside (radar waves, visible light) and the wavelengths that penetrate water (ULF waves) can't be used to make an image because they don't bounce back off stuff in the water.

4: Particle beams? Are there any particles that can penetrate water, but yet bounce back so we can make an image? There are: muons.. Cosmic muons able to penetrate matter have been used to image dense objects. Muography was recently in the news after researchers using the technique found a previously unknown void in the Great Pyramid. The attached slide shows a muographic image of a volcano. 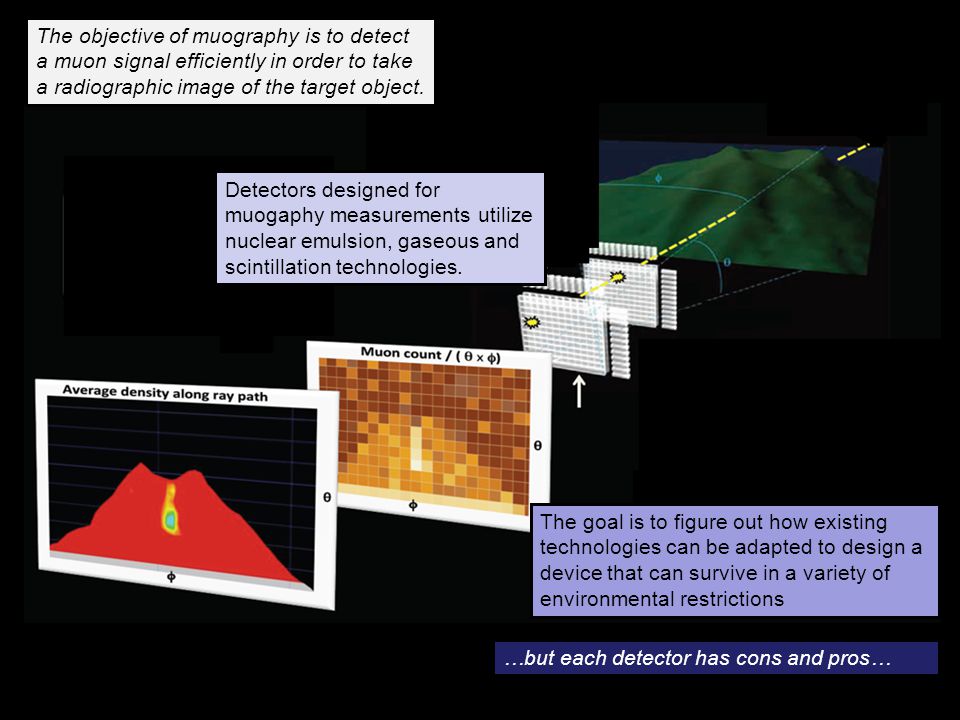 Energetic muons can penetrate many kilometers of water. 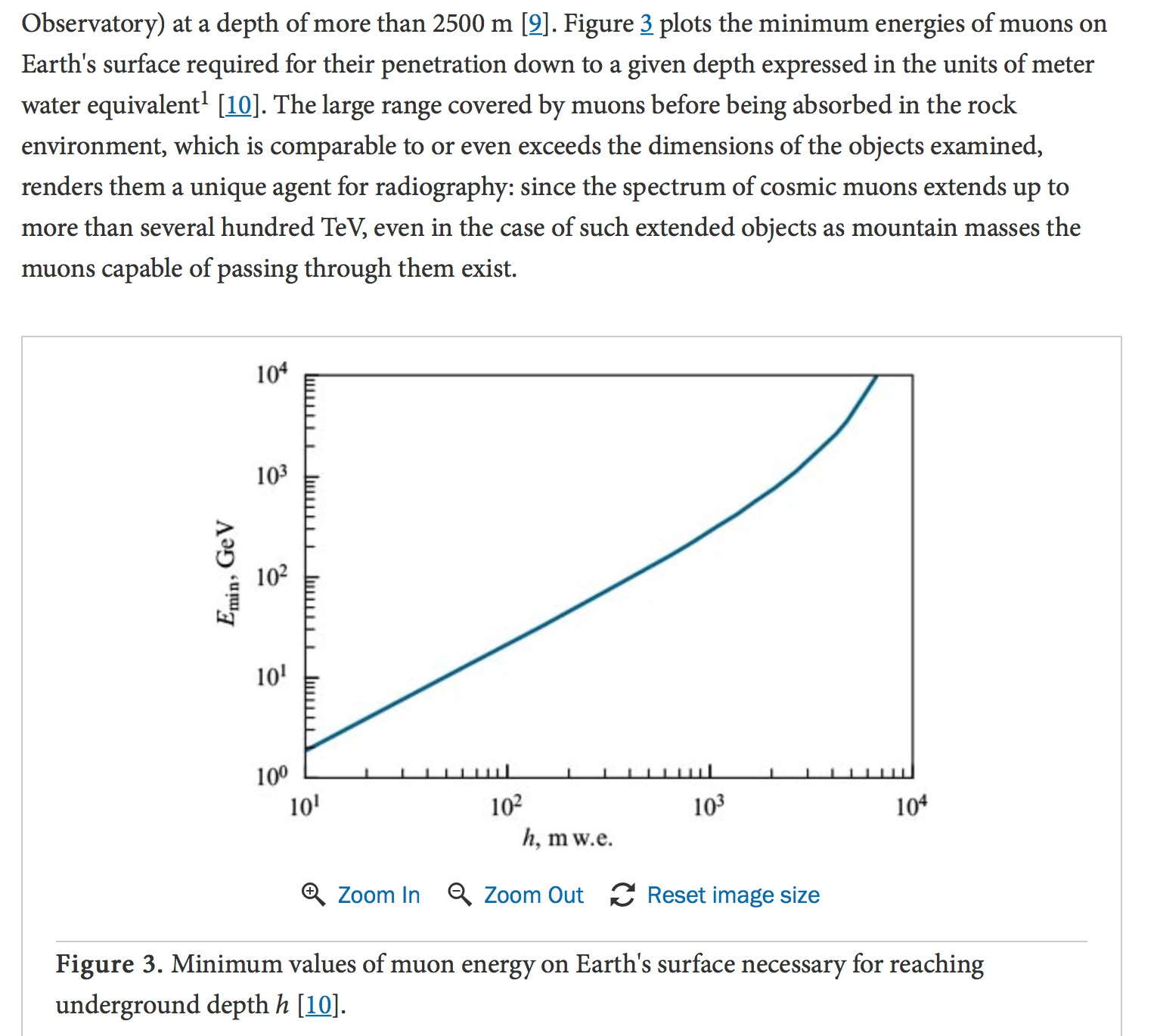 Most muography uses a detector on the far side to produce an image out of muons that penetrate the object - this is the case for the pyramid and the volcano. That is like an X-ray - the film makes an image from X-rays that traverse the object and are no absorbed.

Industrial muography applications are in more of a hurry, and produce images produced by muons scattering off an object struck by a muon beam. That is how it works with sonar, or radar, or visible light and that is what we will use on the sub.

A tight beam of energetic muons (with a specified energy) is sent out at relativistic speeds (discerning readers will note: these speeds are necessary to prolong the short half-life of the muon!). Like sonar and radar, backscatter of these particles are used to generate an image. Because the energy is known and absorption of seawater is known, the distance to the reflection can be characterized by the intensity of returning muons - again much like sonar or radar. This is fine for generating a picture of the area as the beam spins around. Unlike radar or sonar, more precise characterization of a detected object can be obtained by training the beam on the object.

If you know someone is looking for you with radar, you can detect their radar waves and so know they are looking. So too muon beams. Probably this is true for any kind of active sensing.

In case someone from Syfy channel is reading this and thinking about how to do the CGI - remember that relativistic speed muons will emit Cherenkov radiation, which will probably light up the muon stream for some distance from the sub. If you are spinning the muon gun to cover a hemisphere of detection you will have a blue hemispheric glow when the muography is running. 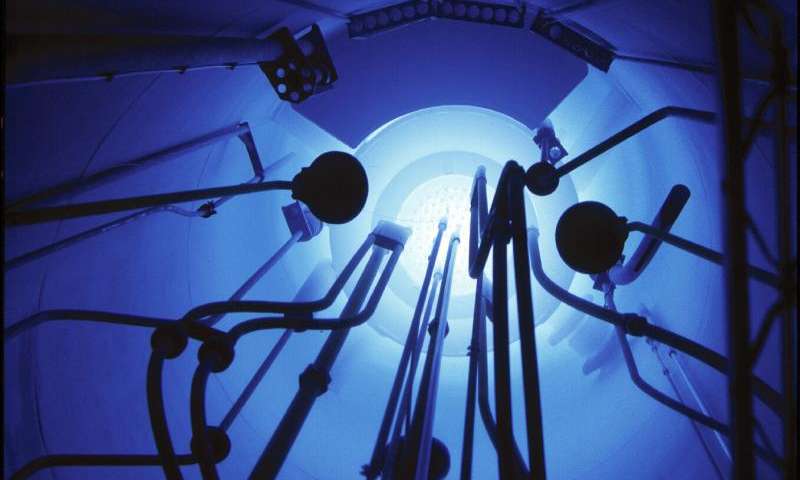 Depicted: a neutron gun. But the radiation looks the same, I think.

But from outside the submarine.

Your supercavitation invention basically puts the submarine "outside the water", in its own bubble. As you mention, the energies involved are so high than most energy/signal coming from the outside will be lost in the noise. The only exception would be EM waves, but unfortunately water is very good at absorbing those except for the long wave frequencies, and those are not very useful for radar.

Since such a submarine cannot be the product of a small navy, it would not be that difficult to seed the sea with autonomous, "sleeping" sonar stations. When a friendly submarine goes through the zone, it contacts with those stations which become active, scan the area and give the information back to the submarine.

HQ knows the path of the submarine and sends airplanes or missiles carrying sonobuoys through its path, which on contact with the water scan the area and report to the sub.

You could even combine all of them; a) for friendly waters, b) for the expected development of the mission, and c) as useful in case of unexpected situations.

The main issue with those is that they signal to the enemy the presence of a submarine, but with the level of noise that such a submarine would do that would hardly be a secret. Your submarine is not very stealthy, it is a submarine that uses speed to bypass enemy defenses, gets in position and launches its missiles/commandos and returns back home.

Land does not change its shape overnight, and the depths of the sea are basically empty. The submarine just navigates blindly, using GPS to know where it is and just hoping that it does not run into another submarine. After all, if current submarines are doing a good job at being stealth right now, this would be pretty much how it works now (yes, there is sonar, but active sonar gives away the position of the submarine to the enemies, so it is not always safe to use).

Slow down, you move too fast...

The Speed of Sound in Water is on the order of 1,500 meters/second, which works out to around 3,400 miles per hour! Let's assume that supersonic means "a little more than the speed of sound" to avoid the equivalent of sonic booms and call it a nice round 3,600 miles per hour - one mile per second. That is SUPER FAST. I know, someone always thinks the next big thing is "impossible" - e.g., railroads at 50 miles per hour or jet airplanes at 500 miles per hour. But this is really crazy fast. 2 hours across the Atlantic. 3 hours across the Pacific.

Navigation - Not a Problem

GPS doesn't (normally) work very well under water. But inertial navigation was used by planes and submarines long before GPS existed, and it can do the job quite well. So don't worry about getting to the right place. Instead...

Collision Detection/Avoidance is your REAL Problem

Everyone has, unfortunately, seen the results of automobile crashes at 40 miles per hour. That's pretty bad. Every so often we see the results of plane crashes at 400 miles per hour (a.k.a. "controlled flight into terrain"). That's REALLY bad. Now increase by another order of magnitude. I do NOT want to be on the supersonic submarine that hits an unmarked pier, another submarine, an uncharted wreck or pretty much anything else.

Not the answer you're looking for? Browse other questions tagged science-based technology warfare or ask your own question.