Life under the surface of Ganymede

Inspired by this article about the recent discovery of a subsurface ocean.

So now we know it has a liquid water ocean and a magnetic field. The subsurface ocean is also protected from radiation by the surrounding crust.

There were two potential resolutions to the auroral shift observations of the Hubble: Either a thinner pure water band or a thicker, saltier band of water. Perhaps both exist simultaneously like they do on Earth?

Of the two options, which would be more conducive to the formation of life? I assume the more saline version would encourage more chemical interactions but I don't know.

In either case, what sort of ecosystem would we expect to evolve in this non-photosynthetic, magnetic, underground sea world? What would be key "feeder" species for a food chain?

There are very few ecosystems in earth life that do not depend on the sun as the root of their energy source. Even lifeforms living in caves can trace all their energy back to things washing into the cave from outside.

Even in the deep oceans, most creatures feed on organic matter falling down from above.

The obvious exception to this of course is the life that clusters around geothermal vents in the deep ocean, and slightly more obscurely I've heard of life that lives deep in rock and mostly feeds on the chemicals within the rock.

Now both of these in theory could live on a completely covered world such as Europa or Ganymede. The even better news is that Ganymede not only has a molten core but a magnetic field! 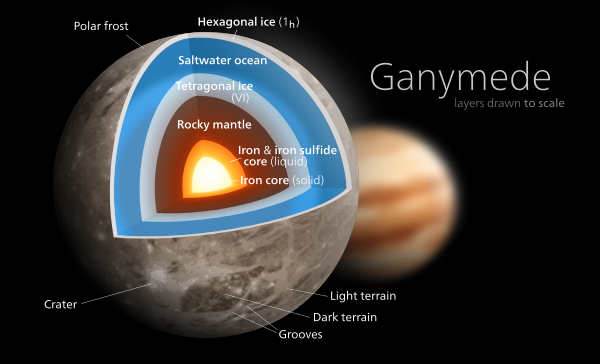 This clearly shows a saltwater ocean with a molten iron core. This means that life similar to our deep sea vent communities would be very capable of surviving on Ganymede and in fact is the most likely form any life would take there. Ganymede and Europa are the two prime candidates in our Solar System for life to be found.

A follow on from this though is that while saltwater would probably be easier for life (it has more chemicals in it so is generally more useful) it probably doesn't make a big difference whether the water is salt or fresh. We know life can thrive in either. The main requirement is a source of energy, and a source of nutrients, and we know Ganymede almost certainly has both.

I suspect it would be similar to the life found at the bottom of the oceans here - maybe something similar to tube worms (http://en.wikipedia.org/wiki/Giant_tube_worm) which use chemosynthesis for energy? Even still, much of the lower ocean's life depends on organic debris from the life above it. Maybe caves could provide a better example?

Not the answer you're looking for? Browse other questions tagged science-based biology space aliens origin-of-life or ask your own question.

13
Could intelligent life on Earth have been seeded by precursor aliens?
9
What would be the consequences of a world that has only one dominant species of non-oceanic animal life?
23
Life from a dead space whale
10
How Long Would Artifacts Last Under the Moon's Surface?
2
Extracting all water from Ganymede?
4
Under what conditions would supernova be survivable under surface