Can we visually identify a fleet from Earth with modern technology?

Two fleets from opposing factions are approaching each other at sublight speed at the edge of our Solar System. The Earth is in a position to affect the outcome of the battle, (i.e, superweapon, etc.) but must correctly identify the fleet friendly to them. Unfortunately, Earth is temporarily unable to identify them by any means other than visually. That means we cannot send a hail to the friendly fleet, nor can we send a scout or fleet of our own to confirm at close range. By the time Earth is able to get these capabilities back online, the battle will already be decided.

Would we be able to identify the allied fleet, and if so, to what granularity?

Could we distinguish between something such as this: 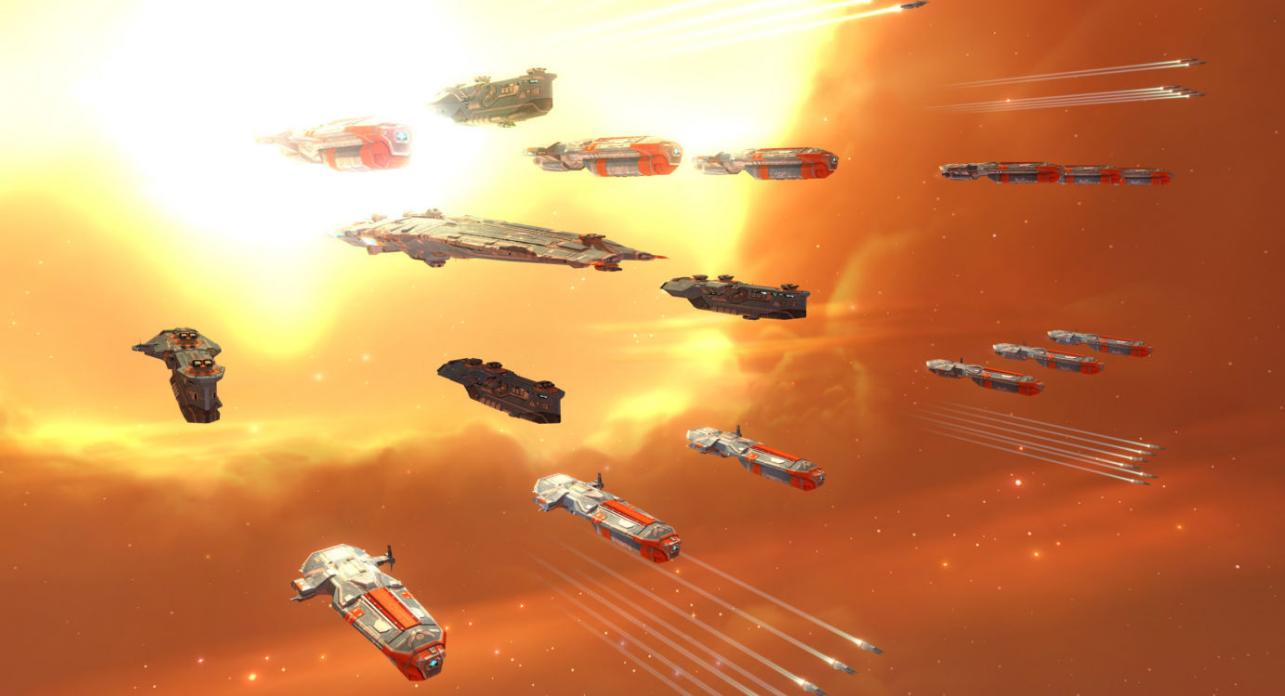 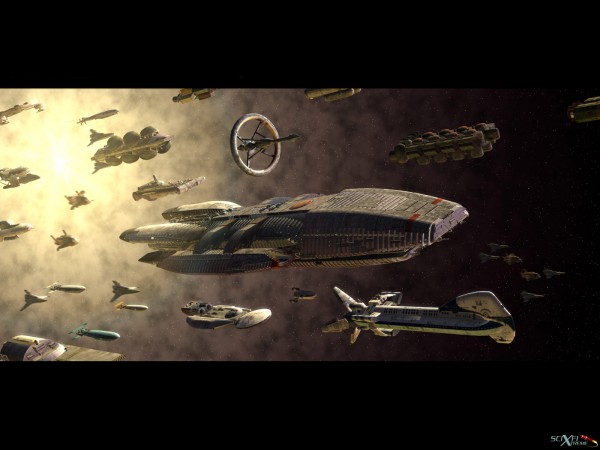 Or this, where the design methodologies would look very similar from afar? Or would it take two entirely different ones, like UNSC designs vs Borg style cubes? Would we be able to differentiate between fleets that share the same class of ship, but have different insignia stenciled on them, i.e, a large rebel flag or imperial flag?

A few details to hammer out first:

The viewing conditions for both fleets are considered the same. One does not have sunlight shining on it while the other doesn't, for example.

Earth still has its modern day space telescopes (2018), but only ones within it's own orbit.

The opposing fleets are roughly the same size, as well as their individuals. So finding a standout such as an obviously distinct capital ship such as a Super Star Destroyer or Death Star style weapon is out of the question.

The baseline distance where both fleets start at and move roughly parallel to the Earth is about the distance of Neptune.

Nope. Read this answer to What is the resolution in megapixels of the Hubble Telescope? on Astronomy SE
For Hubble space telescope, the entire dwarf planet of Pluto is 2*2 pixels.

Hubble is not cutting edge anymore, though. That honor belong to adaptive optics, e.g. the Very Large Telescope
The best resolution is 0.001 arc-second, and Pluto is 0.1 arcsec, so we have 100 pixels for a Pluto, which is 1400 miles in diameter, so you have 14 miles per pixel.

You might be able to tell the color of a really large ship, or count the number of large ships if they are far apart, but that's about it.

Forget about insignia. But if we know about ships' design, we could be able to differentiate them.

The idea is that when approaching the inner solar system, and likely even before that, ships will fire their engines for braking down and maneuvering. This is the most likely how they are going to be discovered, by the way. If two fleets' engines are different, we can analyze the exhaust spectrum and determine whether it's a friend of foe.

If I read into the question properly, we know nothing about either fleet.

Then technically, neither fleet are our allies.

Odds are that whichever fleet we shot down, the other fleet would BECOME our allies quite quickly.

As for identifying who the "good guys" are, about the only thing I could imagine is possibly looking at combat tactics. Especially brutal tactics, as opposed to surgical strikes intended to incapacitate might suggest a more brutal (and possibly "evil" society.

As pointed out, optical identification of the fleets is effectively impossible unless we postulate improbably large space telescopes, with mirrors measured in kilometres rather than metres.

Space is both a vacuum and extremely cold, so the heat energy of the spacecraft stands out like a beacon against the background of space, and isn't absorbed by intervening fluids (at least not on the scale of the solar system. There are interstellar nebula of gasses and dust which can absorb energy on a cosmic scale). This is the reason there is "no stealth" in space, the spacecraft are highly visible in the infrared spectrum.

This includes heat radiating from the ships even when they are drifting, since a great deal of "hotel" power in needed for life support, running the various ships systems and so on. Unless the aliens live in a cryogenic environment, the ships will have to be at several hundred degrees Kelvin just so the crews can survive.

The radiated energy of the ships is compounded when they use their engines. Atomic Rockets points out that the Space Shuttle engines put out enough energy that the small manoeuvring thrusters could be theoretically detected out to the asteroid belt, and the burn of the SSME would be visible from the orbit of Neptune. More detail can be found here. 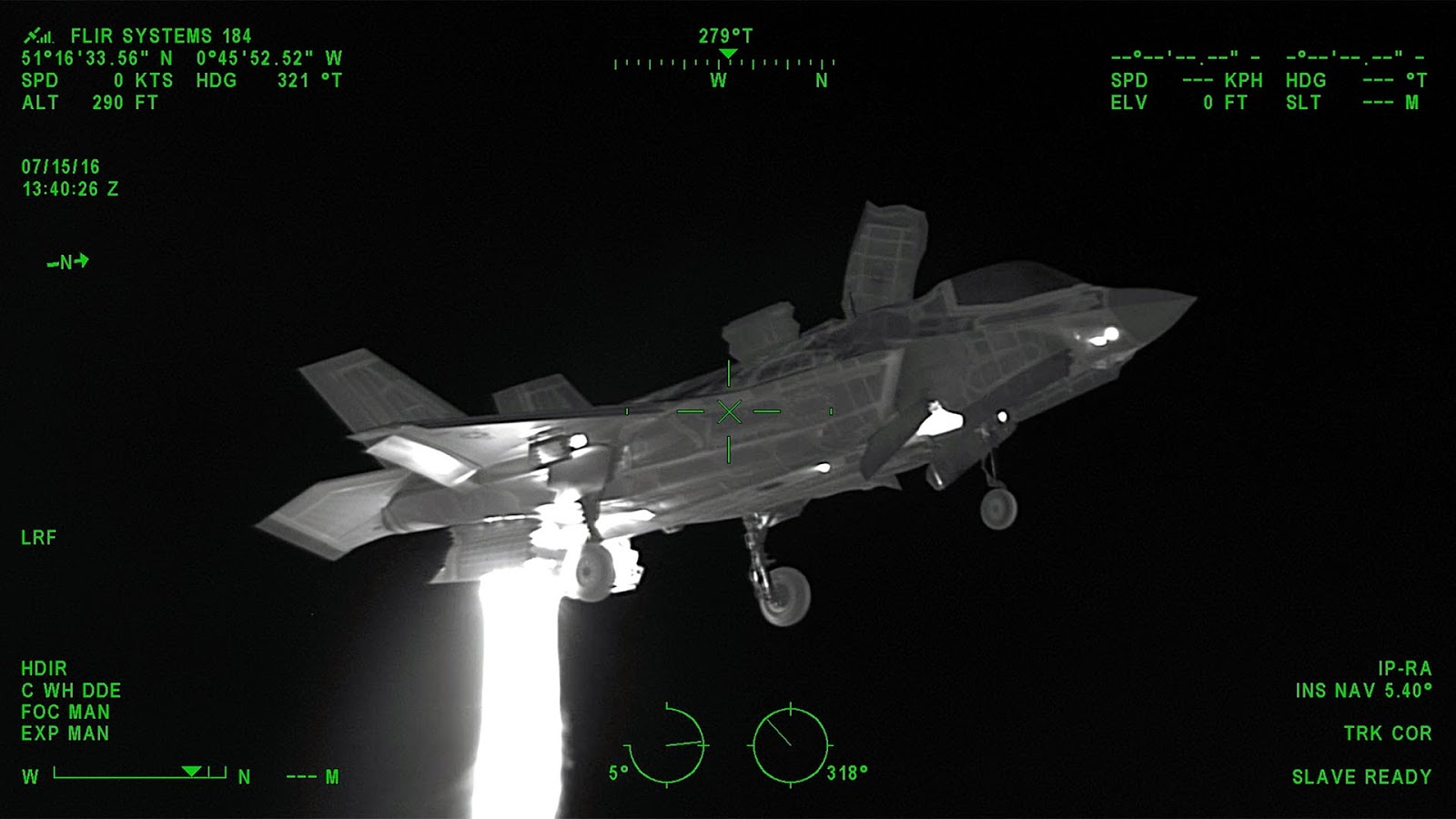 Exhaust plume of an F-35

So while the ships are still smaller than a single pixel, you will have a large and otherwise inexplicable infrared source in deep space. Assuming you have other information about the aliens, you might be able to determine who is who by carefully looking at the infrared signatures. One set of aliens might have significantly warmer or cooler spacecraft because of their environmental preferences, and the energy used to manoeuvre will be very distinctive, especially if you have information about the actual sizes/masses of the ships (larger ships will require more energy to move, so you have a metric of sorts to determine which fleet is which).

Other sensors are available as well. We use radar on Earth, and the Arecibo radio telescope has been used to do radar scans of Venus, providing surface details even from that distance. The sensitivity of the telescope was great enough that during the Cold War it was used for Electronic Intelligence (ELINT), analyzing Russian radars by gathering reflections from the Moon! With this level of sensitivity, radar imaging of the fleets is also possible, but once again, you would have difficulty resolving individual ships. 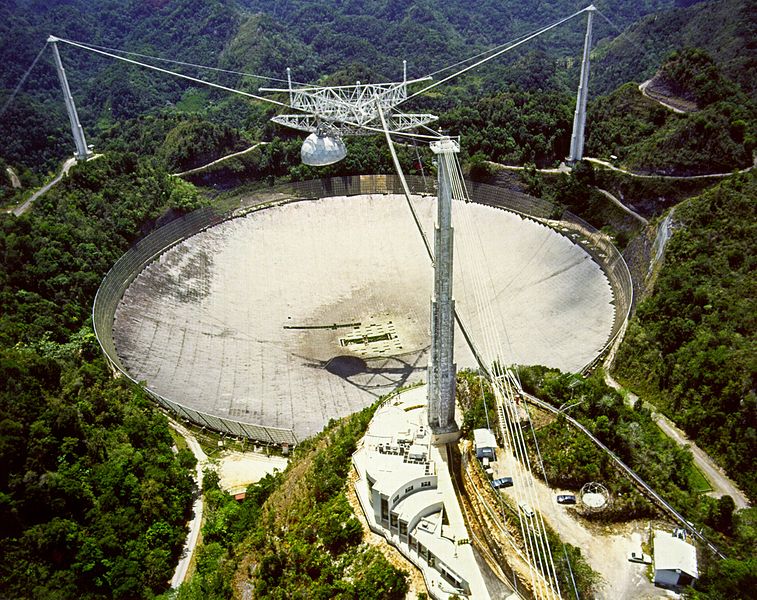 Even more exotic systems could be postulated using current technology. A satellite could be launched with a high powered laser to conduct LIDAR scans of the fleets, to compliment optical, infrared and radar searches. This would likely be in support of fine tuning any observations, and aiming the hypothetical super weapon in the OP. Neutrino detectors deep beneath the Earths surface could also be used to attempt to detect the neutrino emissions from the ships nuclear reactors, although this would be a very low resolution detector.

So although visual detection would not be possible or readable at this time, there are still multiple systems which could be used to locate and identify the various fleets.

A massive fleet is the size of the pointy tip of a pin compared to a planet, much less the expanse of open space visible from the planet. Bald Bear's answer is very important (I upvoted it). If we knew exactly where to look (three dimensions!) we'd be hard pressed to see the fleet to recognize it before 4-5X the distance to our own moon. And that might be an optimistic assumption.

Not the answer you're looking for? Browse other questions tagged reality-check spaceships space-warfare or ask your own question.

50
A small group recreating modern technology
7
Is this reptilian race realistic?
5
Why would magic plausibly conflict with modern technology?
25
How would a lunar colony defend itself against aggression from Earth?