I was thinking of a world like ours where everything, each separate sub-system works within a single-system management. I mean, a planet has one country, an empire, with one bank company, one building company, one agricultural company, one science company, one pension company, etc. Also, one language.

It will barely work at the top

As @AlexP put it quite well So you were thinking about the Soviet Union, an empire with one flag, one language, one bank (actually it had two, one for the Soviet slaves and one for reluctantly trading with the vile imperialists), one retail company, one Academy of Sciences, etc. etc., all lead by the One Secretary General of the One Politburo of the One and Only Party. As you know, it was a peaceful and prosperous empire, of which the subjects did not at all risk their lives to flee abroad, and which absolutely did not kill millions of its own people and certainly did not imprison many millions more at hard labor.

I don't normally quote long comments in an answer, but that one is well done and almost exactly what I was already thinking.

That being said, it did work, at least nominally, at the top of the stack. Hard to do "big science" under the table. The same goes for banking, mass transit and many other things. We even have this in many capitalist/democratic countries - e.g., there is often a single regional (or even national, depending on the size of the country and the particular industry):

Some things just naturally lend themselves to a monopoly or near-monopoly situation. Look at pictures of Manhattan at the beginning of electrification - lots of wires going all over the place because there was no central electric company, which was both inefficient and dangerous.

It will not work at all at the bottom

Look at any communist country. Whether sanctioned or not, capitalism happens. Typically the government eventually realizes it is a necessary evil and will sometimes even support it - look at China today. But even where it is not officially sanctioned by the government, at the small level there is almost ALWAYS capitalism.

If the monetary supply is too tightly controlled then people will resort to barter. I'll fix up your house if you give me 1/2 the eggs from your chickens. The government is counting the eggs? No problem - give the officer extra milk from your cow.

In a government as described, typically only the very top level lives really well. The lower levels tend to be open to corruption - bribes to "look the other way" and making deals to get what they need.

Even in a planet with just one nation, there will be a black market for forbidden (or very limited access) goods. Hard to suddenly come up with a luxury car when only the top government staff are supposed to have them. But a color TV in your house when you are only supposed to be able to afford black & white - no problem if you have friends in the one TV factory. The classic examples - cigarettes, alcohol, etc. are even easier as they are extremely portable.

Economics: The single system will be inefficient

The economic concept of Economies of Scale applies to relevant parts of the design. 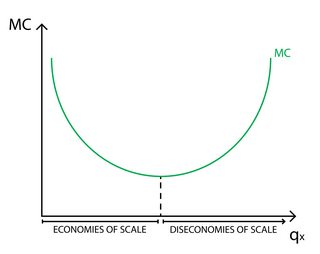 This is one of the reasons why, for example, large corporations occasionally break up.

The best size of an organization economically might be different from what other inputs (politics, policy, social, etc) prefer. There's a balance that must be struck.

Also, the best size of an organization economically varies from industry to industry, and changes over time in directions that might not be easily predictable. There are several models for this: Changes due to technology, changes within an industry, changes in demand, changes due to different regulation, etc.

You can have single-large organizations that provide construction, or beer, or banking, or transport, etc. However, economies of scale predict that prices will be higher than necessary. This will have ripple effects like lower standards of living, social pressure to disrespect the system, and the accompanying political pressure for some kind of reform.

Your state is only possible through singularity. As in AI supremacy. Instead of enslaving and killing humans, AI decides to put an effective management strategy to govern humans. Super effective management allows total communism leading to one of everything. This requires all decision to be done by computer and all interactions are monitored through it. With unlimited resources at hand, AI overlord will ensure one companies will serve humanity at 100% efficiency. Now you choose how much sarcasm is in the text. You might have a perfectly benevolent AI overload, kudos its designer or one that will keep humans happy even if it means killing them.

Not the answer you're looking for? Browse other questions tagged reality-check alternate-earth or ask your own question.

10
No sunlight, just high-energy radiation?
7
Is this reptilian race realistic?
8
Planetary Colonisation; how to retain ethno-racial appearances over millennia?
8
Balanced but Factionally Divided Government System for my Mars Colony
5
How likely is it that an interplanetary empire could exist in the future?
15
Is a privately owned nomadic trading fleet economically viable?
23
Can the Little Prince's planet actually exist in our universe?