To revive the Carboniferous period of earth one man and a group of other scientists have been genetically engineering and breeding land arthropods into giant sizes and exotic shapes since the 50s. The second part of the plan is to release the arthropods starting in Georgia and spreading them throughout the globe. But to accomplish this there needs to be a vacuum in a large number of ecosystems that can only be left by a mass extinction of a lot of animals (mostly vertebrates).

What can someone do to cause a mass extinction that will transform the environment to be beneficial to giant arthropods?

Rodents are the bane of giant insects. Consider the weta. 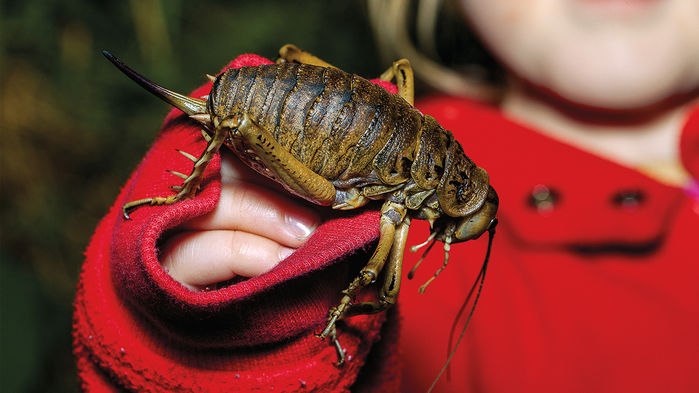 But it and other weta have been losing ground to invasive mammal predators until recently. Flightless and stingless, the odorous weta are easy prey for rats and even mice. "Their smell is so strong that any rodent just goes ‘Boom!’" says researcher Danny Thornburrow, who, like Watts, works at Landcare Research, a public-private research institute in Hamilton, New Zealand. As a result, several species of weta, like New Zealand's flightless birds, have had brushes with extinction.

So too the tree lobster 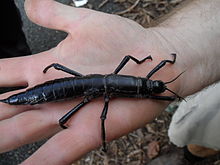 The stick insects were once very common on Lord Howe Island, where they were used as bait in fishing. They were believed to have become extinct soon after the supply ship SS Makambo ran aground on the island in 1918, allowing black rats to become established. After 1920, no stick insects could be found.

The same story holds for other giant insects found on the marsupial side of Wallace's line, the geographic boundary setting apart the regions where placental mammals did not get established (except bats) from the rest of the world where placental mammals rule. Marsupial predators, hungry birds and even reptile predators like snakes monitor lizards are all compatible with big bugs. Not rodents.

How exactly rodents might be wiped out en masse is definitely something that humanity has considered long and hard. Maybe some bioengineered rodent virus?

The easiest way to cause a mass extinction is to, well, keep doing what we're already doing.

Replace diverse habitats with a few cultivated species. Separate habitats to prevent migration. Dispose of hazardous chemical in unwise manners. Change the climate and the sea level. Selectively eradicate species from the foodweb. And more....

One reason that large arthropods were common in the Carboniferous was that vertebrates had not yet got the hang of eating plants. Vertebrates which could eat plant matter as a primary food source didn't happen until the early reptiles cracked the problem. The food chains we have currently (diverse plants eaten by diverse vertebrate herbivores, eaten in turn by diverse vertebrate carnivores) did not dominate until the end of the Permian period.

Prior to that the vertebrates were all carnivores (think giant amphibians and early reptiles) which ate fish, arthropods and each other. So the food chain would be like these:

It'll probably be a bit more mixed up in the middle of those food chains, with adult big invertebrates also eating small or juvenile reptiles.

So to reset to the Carboniferous, vertebrates have to 'forget' how to eat plants. In realistic terms, this means that the plants have to become inedible in some way.

Big problem with the original suggestion is that surface arthropod's size is limited. Without boosting Earth's atmosphere oxygen content, there's not so much that can be done about it. As a result, vertebrate's sizes will always be considerably bigger than arthropod's and vertebrates will likely be the apex predators. Even if some extinction event would wipe out most vertebrates, after a while they will grow back into this ecological niche.

Possible solution is to turn tables on large animals. Insects' strength is in their numbers. A swarm of bees is capable of taking down almost any animal - but a swarm of bees has little incentive to do so. A new class of insects may specifically hunt down animals and eat them (not just suck some blood now and then). This will see animals' numbers plummet, even those who, like bears, are heavily insulated and able to stand against a swarm of bees, because their food chain will be compromised.

Eventually, mammals' evolution will favor armored types like anteater, but they would not likely regain their unquestioned dominance.

Just like the scientist were able to modify the arthropods, they could modify a certain plant that releases poisonous spores that only affect vertebrates. That could be implemented in small quantities throughout woods, forests, fields, etc... and they would multiply naturally.

You see, fungi can synthesize penicillin to fight off bacteria, but has no effect on other fungi. Enough chocolate can kill a large dog while we can feast on it and nothing happens (apart from diabetes). With enough DNA engineering, the plant could release in the air and water a deadly substance that would affect a targeted species or multiple species.

The world is populated by large arthropods who spend the day in pools underwater sheltering from the worst of the radiation. During the night they come onto the land to forage and their carapace protects them from the residual radiation.

Bonus Points: Find some way to make the planet more humid/tropical so there are more pools around the world for the arthropods to shelter. Otherwise they won't get anywhere near the arctic circle.

*This is not true for all arthropods. In general arthropods breath through gills that must be kept moist at all times. Woodlice for example cannot survive underwater for a long time but their gills are close enough to their aquatic ancestors' that they can last an hour or so submerged. It is not far-fetched that an aquatic version of the woodlouse and other land based creatures develop or some already aquatic arthropod takes its place.

Not the answer you're looking for? Browse other questions tagged science-based biology environment extinction insects .