So, I’m creating a superhero story. One of the characters, Jessica Hill, has some of the best superpowers ever seen. She has super strength, flight, and X-ray vision. But, as you all know, X-rays are extremely harmful to everyone, and I don’t want any of my heroes to die. So, my question is, is there an alternative to X-ray vision that would allow Jessica to see through stuff, without causing cancer?

What makes visible light special is that we have special sensors in our eyes that react to this EM radiation when it is at specific wavelengths -- when they have certain amounts of energy.

The entire Electromagnetic spectrum includes gamma waves, X-rays, UV light, visible light, infrared light (which is very useful for seeing how hot an object is), and all of the ranges of radio waves, including microwaves.

Certain objects are transparent to different wavelengths of light. A household pane of glass lets visible light through, but blocks infrared and ultraviolet. Different types of glass can be used to let IR and UV light through, as well.

Some objects react differently to different types of light. Phosphorous will absorb UV light and accelerated electron, and re-emit it as visible light. This process is used in fluorescent lights to convert UV into white light, and in old CRT televisions to convert the stream of electrons accelerated by the cathode-ray gun into the images you see.

If the super power worked by expanding a person's ability to see more than just visible light, they would see Wifi transmitters as bright lights casting radio-light onto all of the metallic objects in the room, including the metal inside of various walls, like nails in studs, or steel rebar inside of concrete.

They'd see humans, computers, and other warm objects glowing warmly, even being able to see them walking behind thin curtains, and can tell when a power cable is actually supplying power through IR light. (They'd also see these power cables in various radio and microwave frequencies.)

They'd see the string of communications satellites in geosynchronous orbit, arrayed like a string of pearls fixed to the sky in, and would be able to see these whether they were indoors or out.

And none of this would require our super-powered friend to do anything that would increase the chance of cancer in any of their friends, because vision is a passive ability. You're just collecting the information that's already there, in ways that no human can.

And, a related video, showing Wifi-frequencies radio waves being used to "see" people through walls and windows: AI Senses People Through Walls

Only one thing comes to mind for a "vision" that allows you to actually see through objects without another source behind the thing you want to see through (the problem X-ray vision has).

A good sonogram can see through an object. If Jessica can emit a range of very short and very long sounds simultaneously (with a different organ than her voice hopefully) and has some advanced ears she can gauge direction, shape of her surroundings and even the thickness and materiel properties (he's carrying a gun, theres a vial of anti-hero in his pocket, 4 baddies and one tied up guy behind thos wall, this poor victim broke something and has small internal bleeding etc).

Normally this is far fetched even for me, but next to straight up flight and super-strength this one is straight up plausible.

I know this sounds stupid, but have you thought of echolocation? In conjunction with super-hearing (increased perception distance and tone range), this would be extremely viable as an option. In addition, if she potentially trained enough with it, ultrasonic noise has been known to mess with people's heads, and is even implemented as a weapon. This would make for an interesting take on super-breath.

X-rRay machines work by putting the patient or object between the device that generates the X-rays and the device that records the image. Any substance that reflects X-rays well enough to be send a lot of X-rays back to the X-ray radar generator would probably reflect X-rays too well for its insides to be seen by X-ray radar.

So Jessica Hill couldn't use natural X-rays in the environment to see through objects that were between the X-ray source and Jessica. X-rays are adsorbed by the atmosphere after travelling only a short distance, and the main natural sources of X-rays on Earth is the Sun, and solar X-rays are stopped by the miles of atmosphere, which makes it possible for life to survive on Earth.

Maybe Jessica Hill could generate some kind of force field behind whatever they were looking at, and the force field would reflect the X-rays that Jessica generates back at Jessica. Thus Jessica could use X-ray radar on objects that are relatively close to her.

And if super heroine Jessica is battling the more powerful super villain Invincious and is losing she can use her X-ray radar on Invincious during the fight to ensure that Invincious will eventually get sick and die and no longer be a menace, if that is not against Jessica's code. I would hope it would be against the code of even super villains.

Or maybe your super heroine Jessica could make an X-ray source appear behind whoever or whatever she wanted to examine, and thus her X-ray vision could work like X-ray machines do.

And if Jessica Hill can somehow "see" neutrinos, then she could fly to the side of a planet opposite the local sun and "see" the internal structure of the planet because some parts would adsorb more neutrinos from the sun and thus appear darker to "neutrino vision".

But she would have to be incredibly sensitive to even the tiniest differences in neutrino flux, because even the most neutrino adsorbent parts of the planet would adsorb only an extremely minute fraction of the neutrinos that pass through them.

So trying to use "neutrino vision" to see the insides of small objects like persons would be millions of times more difficult, and thus probably impossible.

It is possible that Jessica could generate an intense neutrino source behind the person or object they wish to scan, and thus see the object with the neutrinos that pass through that object. Or maybe generate neutrinos from her body and generate a neutrino reflecting force field behind the object she wishes to scan.

Ground-penetrating radar can penetrate some distance into solids and liquids, so Jessica could generate radio waves at the proper frequencies to use penetrating radar to see inside objects and people.

And there is echolocation, emitting sound waves through air or liquid that are reflected off of solid objects to show where those solid objects are. It is possible that some creatures that use echolocation process the data in the vision centers of their brains and thus see images of the information from the echolocation.

And possibly Jessica can switch between two or more of those systems for different purposes.

And a more plausible superhero Jessica will have some type of machines, gadgets, and sensors which do that and feed the information into the vision center of her brain.

And a less plausible superhero Jessica will have natural abilities to do so, and will have various organic generators and receivers, including extra eyes, or ears, or antenna. No one will ever mistake her for a member of the species Homo sapiens without an extensive disguise.

And an even less plausible superhero Jessica will biologically generate any waves she emits and biologically generate invisible force fields that will receive and detect the waves she receives and feed the date into her brain. Thus it would be possible for that much less plausible superhero Jessica to look like a human woman or girl, because the nonhuman senses would be achieved with invisible force fields that nobody could see.

Just as in Berserker Man (1979) by Fred Saberhagen the super suit that is the only thing that can save mankind from extermination mostly consists of invisible force fields and the visible parts are comparatively minor. In this case the force fields are generated by machines, which is much more plausible than biologically generated force fields.

Or maybe your Jessica is an agent for some all knowing supernatural being who puts images of all the hidden stuff Jessica needs to see into her brain's vision center.

In E.E. Smith's Lensman series many nonhuman species were eyeless. Instead of vision, they used the sense of perception to perceive their surroundings. They sense the the 3 dimensional shapes and sizes of objects, including the far sides, and the the 3 dimensional location of those objects.

Since perception is a psychic ability instead of a biological sense, a superhero like Jessica Hill with perception wouldn't need any strange looking sensory organs that show she isn't human to use an ability like perception to see the insides of objects.

By the way, the Lensmen are examples of sort of "superheroes" whose powers are a lot fewer and weaker than those of Superman but still enable them to achieve very impressive results.

see and READ the Aura. 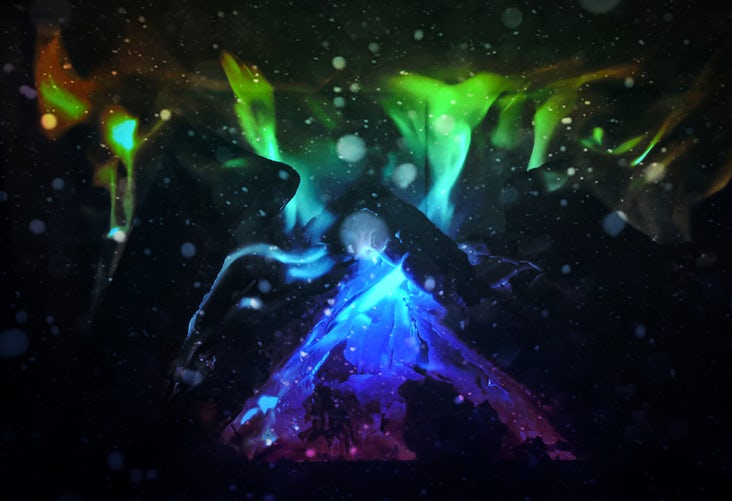 What is the Aura ? Everything in the Universe seems to be just a vibration. Every atom, every part of an atom, every electron, every elementary “particle”, even our thoughts and consciousness are just vibrations. Hence, we may define the Aura as a electro-photonic vibration response of an object to some external excitation (such as an ambient light for example)...

The most important property of the Aura seems to be the fact that it contains INFORMATION about the object.

Aura around living (conscious) objects (people, plants ...) changes with time, sometimes very quickly. Aura around non-living object (stones, crystals, water...) is essentially fixed, but can be changed by our conscious intent. Above facts have been observed by scientists in Russia, who have been using Kirlian effect to study Auras for the last 50 years.

Your superhero can perceive the auras of things living and nonliving. This is a good approach if you are less concerned with electromagnetic reality (I suspect you actually are concerned) and more concerned with awesomeness. There is a boatload about auras on the web - a syncretic gemisch of Indian mysticism, Soviet Kirlian pseudoscience, New Age crystal angels and other elements. Great stuff because you can borrow liberally instead of inventing it all and aura writings have cultural depth when used as a story element.

Note also: one might need to use one's own aura to perceive auras, which means at a distance your aura might need to be big. The perception is actually an interaction - like perceiving an object by feeling it. Interactions go both ways and in widening her aura to perceive the hidden, your hero might become influenced what she perceives.

5
Night vision and TV screens
6
How would people in the 1920s-1930s explain or rationalize superpowers?