Modelling a multi-star system with numerous planets and moons

Would it be in ANY way possible to have 3 or more stars within a few light-hours (up to several light-days between the most distant stars) of each other, and for the resulting orbital mash-up to allow for numerous planets to have stable orbits with moons?
These do not necessarily have to be on a single plane, and possibly work with several super-giants providing gravitational wrangling.

It would be nice if the planets could be atmospherically stable/habitable, either by incredible magnetic fields providing significant radiation shielding, or just by the stars being weaker and the planetary atmosphere being high in greenhouse gasses in order to hold onto the heat, or something else.

You may be able to temporarily create a system like this, but long term, it would not be stable.

Let's first reduce this system to a binary system to talk about what would happen. 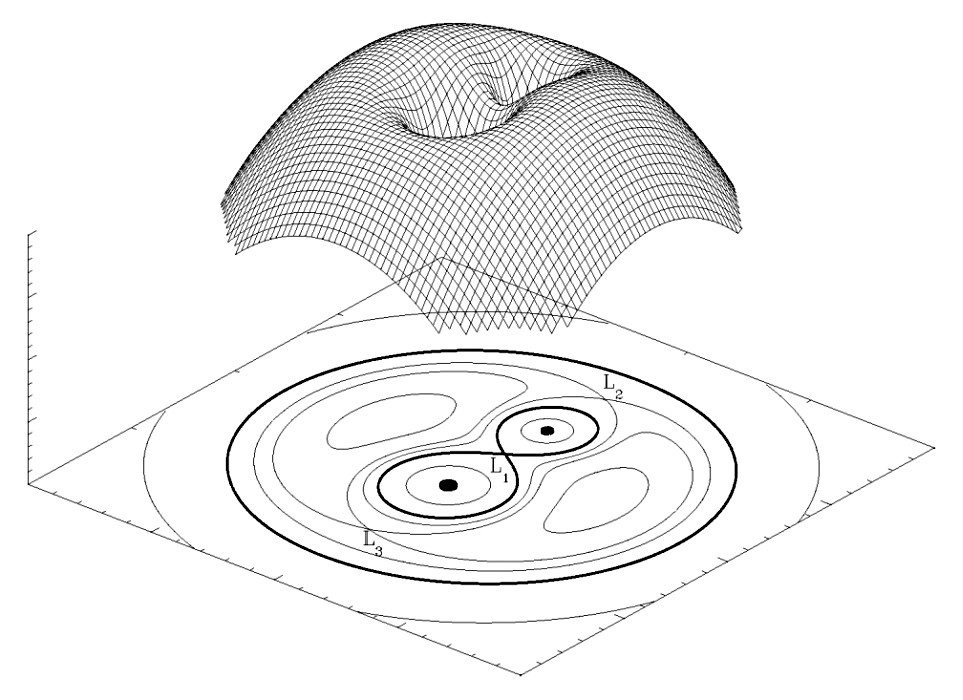 In a binary system, a planet has one of three orbit options:

You can see in the potential diagram above how the figure-8 pattern is stable, but any perturbation would cause it to change into one of the other two orbits.

This problem is exacerbated in a 3/4/more star system. And if you have more than one planet, then you're guaranteed to get the kinds of perturbation that will decay all orbits into S- or P-types.

However, we do know about binary star systems with multiple planets (Kepler-47 is a great example), so this is not an impossible feat. Be warned that more than a couple planets may be impossible, unless they are significantly far from their parent stars.

As far as habitability goes, we honestly don't have a full understanding of the Goldilocks zone around multiple star systems. If the two stars are far enough apart (on the order of light days), then we can roughly approximate an S-type orbit as a single-star orbit, which gives us the Goldilocks zone. If the stars are much closer (on the order of a light hour or less), then it's unlikely that an S-type orbit would be habitable. However, a P-type may be habitable.

A complication here is that we haven't found any non-gas-giants in a P-type orbit. This may simply be a limitation of our current technology. Some astronomers propose that moons of the gas giants could possibly be habitable.

Depending on the assumptions that we're making, there are multiple scenarios where a trinary system could contain habitable planets.

The other possibility is looking at the definitions of 'stable' or 'habitable'. An unstable system could still remain habitable for thousands or millions of years - even if the stability is decaying quickly (on an astronomical scale), civilizations could rise and fall before the changes were noticeable. While this may or may not provide enough time for intelligent life to naturally evolve, even a highly unstable system could potentially remain stable enough to colonize and remain habitable for far longer than human history.

I doubt it, for the simple reason that "light hours" is the distance at which some of the planets in our own solar system are currently orbiting.

I can't imagine having another star at the distance of Pluto would do any good to a solar system. Let alone multiple. And they would all somehow have to orbit each other, without stealing each other's planets.

Binary and triplet star systems have been observed, and some of them, such as Gliese 667, are known to have planets similar to Earth (Gliese 667 Cc which has Earth similarity index of 85%)

According to this lecture, the average distance between neighbouring stars in the Galactic Center is estimated to be about 1000 AU, or 1 light week, so even without the mashup you can expect to have neighbouring stars a few light days away.

I don't think the close proximity of start will affect anything in terms of habitability. Pluto, which is only 39AU away, get's very little sunlight (you can see "noon on Pluto" here), at few hundred AU, the effect is negligible.

Not the answer you're looking for? Browse other questions tagged planets stars or ask your own question.

36
Habitable moon of a gas giant: working out the sizes and distances
5
What minimal magic is needed to maintain a huge torus planet?
2
Conditions for human life in a Jupiter-like system
5
How would a colliding binary affect its planetary system?
13
Are Trojan Planets Possible? Are Habitable Trojan Planets Possible?
19
What would the consequences be of a high number of solar systems being within close proximity to one another?
12
How close to each other can Earth-mass planets plausibly form from the protoplanetary disk?
7
How soon does the Earth's surface re-solidify after the red-giant Sun is replaced with a different star?
5
Binary Star System Build - Alpha Centauri