What are the minimum dimensions for planetary rings to be as visible as the moon in our night sky?

What are the minimum dimensions (length, width, height, etc.) for rings to at least be as significant (as in brightness/visibility) in the night sky as our moon?

Since there are so many variables that come with latitude, and angles in relation to the planet: How big would the rings need to be to be seen from the poles?

Before I begin, we need this picture: 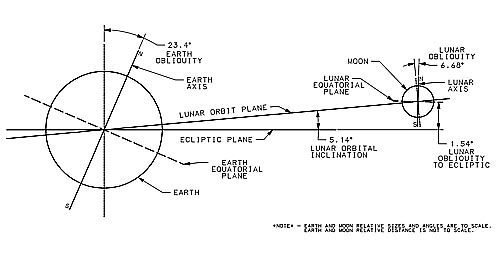 That's the Earth and our moon. OK, simple answer:

Your's standing on the pole, which means you're technically looking down on the ring, but from your perspective (due to the enormous distances involved), it actually appears like you're looking at something low in the sky (aka, "up"). The goal is for the ring to have the same brightness and, I'll assume, the same "vertical impact" as the moon would have if you cut a moon-sized circle out of the picture our observer sees from the pole.

Rings have at least two radii. We'll assume the simplest case of just two. R1 is the "nothing there" radius (also called the "inner radius") between the center of the earth and the inner edge of the ring. We'll make R1, oh, let's say 85% of the distance from the Earth to its moon or about 200,000 miles.

R2 is the outer edge of the ring. The ring's width is R2-R1. We want the part of the ring that appears the thickest (the center of the arch we can see when the sun comes up) to be about the same visual size as Earth's moon. Due to perspective, we need the actual ring width to be larger than the moon's diameter. At a guess, let's say 115% of the lunar orbit or 275,000 miles. That's a ring width of 75,000 miles. (Fair warning, a 30% increase in width to compensate for the perspective shift from a sphere to a flat plane might be quite a bit too much... but it's close enough for government work.)

As morning breaks, you would see an amazing arch, brightest at eastern horizon, darkest at the western horizon, thickest in the middle, and it would (if my guesses are basically correct) have the same standard of visibility as our moon if you just stared at it.

As the day progresses the ring's brightness would appear to shift with the sun from east to west. Because you're at the pole and it's orbiting the equator, the outer edge of the ring would appear much brighter than the inner edge. It would be pretty cool.1

Your composition is important. How much material there is, how thick the ring is, how dense the material is within the ring, what the material is made of... all that (and more) contributes to what happens when sunlight hits the ring. Is there ice? Sparklies. Is it dirt? Kind of a lunar feel, unless there's iron in the dirt, then maybe a redish hue. Is there a lot? High reflection. Is there a little? low reflection and fuzzy borders.

And then you add in axial tilts, orbital tilts, time of the year... Variables....

But, that should be the simple case basics. There are a fair number of people on this site who know more about this than I ever will. If they post with a comment along the lines of, "You know, JBH's answer was OK, but..." then take their word for it.

In the end, for the sake of your story (I'm assuming this is for a story), let me recommend that you don't get bogged down too deeply in the details. You need to be able to reasonably describe what you want the reader to see in their imagination. Exact details are far more than they need for that. Besides, at these scales you can vary a number by what would seem to a mere mortal to be massive amounts (tens of thousands of miles, for example) and still be "basically correct."

1 How the rings present in daylight is an assumption on my part. Remember there is o axial tilt in this simple example, which means is should (I believe) do something you wouldn't see on Saturn — the outer edge should be brighter than the inner. This would be due to the outer edge acting to create a shadow on the innter edge. Due to Saturn's axial tilt, the outer edge never shadows the inner edge, it only shadows the planet.

Not the answer you're looking for? Browse other questions tagged planets planetary-rings or ask your own question.

13
What are the parameters of a planet having multiple moons?
8
How to create a "twilight" world around a red dwarf star
10
A brighter moon that's harder to see
3
Consequences of a two-mooned system losing the one closest to the planet?
9
Ringed Planet: The shadow's effect on fauna
10
What is the maximum orbital time for my moon around my planet?
8
How to navigate a ringed planet at night?
1
How Bright Would Super Saturn's Rings Be in Our Sky?
4
What is the minimum size of an habitable planet to have two moons?