Designing a creature with jaws to crush iron bones

In my most recent question, I asked for a material other than calcium and collagen that could form skeletons in alien creatures. My favourite answer was bio-steel; "Iron with a small percentage of elemental carbon".

There will be scavengers on my world; scavengers as powerful to the alien carcasses as spotted hyenas are to Terran ones. And that means that their jaws need to be able to crush the steel bones.

So, what anatomical adaptations would be best for a scavenger that's built to crush iron bones? Assume a radius of about 5 cm and a density of 7.5 g/cm^3

Your scavenger needs to way to digest the chunks of bone it swallows. So it already needs some sort of strong acid already in its biology. A more potent form of the same acid is injected into the bones to soften them before they are broken up and swallowed. Note bones are highly porous on the inside which means the acid has more surface area to work with. 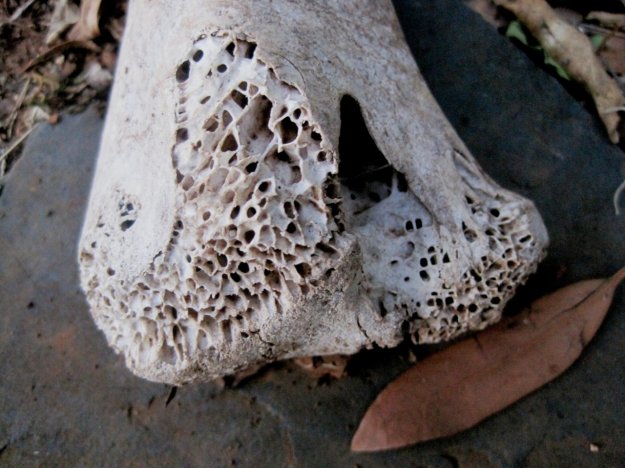 These aliens might have a very strange metabolism where the acid is very common and does not react strongly with their flesh et cetera. The same way water is a very common in Earth biology but has a violent reaction with certain metals such as caesium.

Steel bones won't break like terrestrial bones do so you need to look at metal working tools first and then work back to real biological designs with similar qualities.

To make an appreciable impact on what is essentially sheet metal tubing you need one of two things, either a punch or a shear of some kind. If it's a punch it's designed to push through the steel in many places allowing the marrow to be sucked out the multiple holes. A shear on the other hand would be used to cut the ends off the bones to give access. In nature a punch style tooth would be something like those of the crocodile or the anglerfish, long conical teeth designed primarily for penetration. The beak design of parrots is a good example of a shear, the two halves of the beak are offset and come together from the back forward cutting most objects open, the hook prevents objects from being pushed out of the birds mouth in the process.

You might also look at the approach the Bearded Vulture takes to bones. They simply swallow then whole and their super acidic stomach juices dissolve everything. They do have to be somewhat selective about size though.

The meat and fat have the most calories for most animals so they will want to go after those instead of the bones. 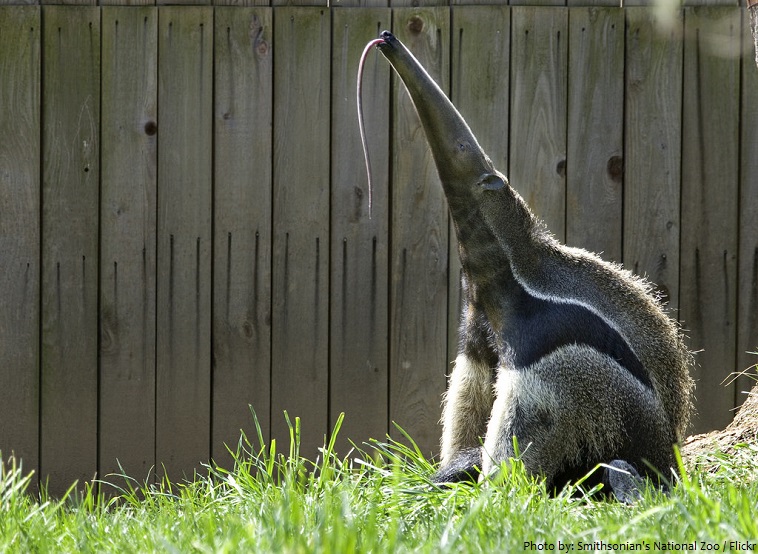 Instead I propose something like and Anteater, with a long but thin tongue that can scoop in between bones in order to eat the dead animal starting with the softer innards. The tongue will want enzymes that break down muscle tissue to more easily consume the meat, something like the pineapple enzyme Bromelain would probably work in the saliva.

With the carcass clean there can be a large symbiotic snake like creature which would consume these bones and slowly digest them for a long term energy source. They would need to be large enough to hold entire bones in their stomachs, so I would make them long enough to hold an entire femur and still move. 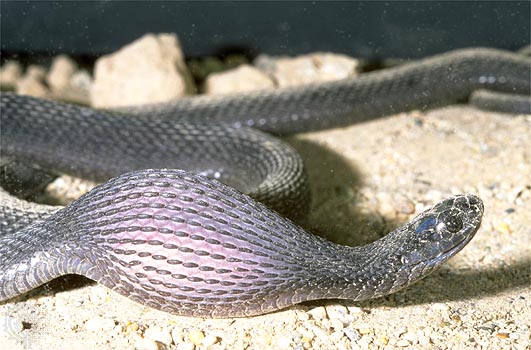 This way you have 2 species which benefit from a single death and neither have to complete the costly action of actually going through the bio-steel bones.

To crush iron, you need something harder that the iron and leverage to apply it.

Iron is not that hard; 4 on the Mohs scale. That is probably good for application as a bone as you want the bone to flex a little, not shatter. But it is easy to find environmental materials harder than Mohs 4. Quartz, granite and basalt are all common surface rocks and have mohs hardnesses of 6-8.

Your creature would have double hinged jaws like a bolt cutters, to maximize leverage.

The crushing surface would be comprised of rocks found in the enivronment and the creature would always be on the lookout for these, or perhaps have areas where it would return to where good tooth rocks could be found (it would learn these areas from its mother). Good rocks would have a flat side and a sharp side and would be rotated in the mouth such that the flat side was against the jaw bony plate and the sharp side would be inward, applied to the iron bone. There would be more rocks than needed in the jaw, to make sure there were always some ready for bone crushing. Blunted or broken tooth rocks will be spit out.

The use of found rocks for digestion is very much done by birds and crocodilians as well as extinct reptile lineages. Birds carry ingested grit and pebbles in the gizzard to grind hard food. Crocodilians do the same with rocks in the stomach. Using rocks for tooth-type jobs is not a stretch at all.

This would be a tad long for the comment section, so forgive me and allow me this suggestion: Since you're proposing a scavenger, have a species that moves in packs. From their mouths, they expel a protuberance that releases an enzyme that will allow them and only them to eat the 'melted' meat without other predators to disturb them. Once they leave alone the carcass, the sentients can pick up the cleaned iron bones and make use of them

EDIT: HOLD IT RIGHT THERE! FOUND IT! Dragons! Your 'scavengers' are bonafide dragons. Oh, sure, they are natural predators and mighty ones as well, but...what if the females decided to partake in scavenging so that they melt the iron inside their stomach and use it to coat their eggs with an extra-hard casing? The Hatchlings would be born with the help of mum who'd break the egg with her jaws. And this would also explain the folklore with dragons and their hoard -people mistook highly protected metal eggs for riches! This would solve the jaw strength without recurring to exotic design. And those iron bones would turn out to be useful!

You really just need teeth that can withstand the damage caused by crushing the steel, currently bones are incredibly hard to break. If you've seen swords or axes attacking beef thigh bones, you'll know that steel ones might be easier to break!

(actually, I recall some Forged in Fire episodes where hardened steel knives are tested against bones, and the knives don't exactly come off unscathed. I imagine un-hardened steel would be next to ineffective)

So scavengers with bone-crushing jaws like we already have in the real world, maybe with metal teeth themselves - if you have steel bones, why not steel teeth too.

Alexander has a valid point. Creatures don't evolve to be cool, they evolve to be effective. Wasting energy on crushing ridiculously strong bones when the rest of the animal's flesh is still (presumably) soft or relatively soft is a bad adaption.

You did not tag your question with reality-check or science-based, so I don't know how interested you are in more practical solutions to this problem. But here are some other options.

If you want the predator to be effective at disabling movement:

Hamstring the enemy instead. Bones need muscles and tendons to move, so if you slice them the appendage won't move at all. This kind of mimics breaking bones in terms of the immobility. For this, the predator just needs razor sharp teeth with a long angled edge for biting and slicing. There are a lot of opportunities here for wonky and scary looking alien predators that retain function. For example long blade like chins, teeth, etc.

If you want the predator to be effective:

Make your predators bite and run predators. There is a precedent for this in terms of Cookie Cutter Sharks.

Cookiecutter Sharks, bite off bits of whale blubber rather than attempt to kill the whale - which works out much better as the sharks are significantly smaller than the whales. https://en.wikipedia.org/wiki/Cookiecutter_shark, Thanks @Morgen for this information.

Instead of outright killing prey your animals can just run up to their targets, take one big meaty bite out of them and then run away with a mouthful. This seems very practical in a scenario where prey has iron bones.

A further look into breaking bones:

Breaking iron bones poses a lot of other challenges too. Drawbacks that effect the predator immediately after it succeeds. Remember that carbonized iron is very brittle and very strong, so:

In the end the adaption would require a lot of other complimentary adaptions as well.

Not the answer you're looking for? Browse other questions tagged creature-design anatomy bones carnivorous or ask your own question.

0
How to design a fish-like species jaw that can crush any known metal?

4
Could a creature have multiple jaws?
7
Can I have a big flying creature with jaw and teeth?
6
Reality Check: What sort of jaws would a venomous and omnivorous creature have to carry a human in its mouth?
9
How would humanoid creatures with powerful jaws, claws, and a tail efficiently use their anatomy in barehanded combat?
4
creature with retractable spikes
4
A creature with a built in flashlight
3
Could a human sized creature with a skeletal structure similar to a gibbon's be bipedal?
8
I want to strengthen bones with some kind of material. Where exactly does this material go?