I want to explore the possibility of a planet that is extremely misshapen. If we were to extrapolate what we have observed from our solar system and the extra-solar planets discovered so far, we would have to be conservative about such a possibility because nothing of the sort has been discovered. Moreover, our understanding of physics tells us, all else equal, the more massive something is the more spherical it becomes (not a perfect sphere typically). This phenomenon is easily seen in asteroids since they are less massive than planets, they can take on a Siamese twin shape: 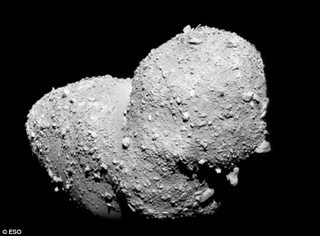 Now if we were considering very small dwarf planets, this would be a piece of cake, because like asteroids, the mass can be small for misshapen bodies. However, I'm interested in Siamese twins that are earth-like. So with all of the aforementioned odds stacked against this idea, I still wonder if somewhere in the vast, vast universe there might be a freak accident of astronomical proportions that could allow for a planet to have a Siamese twin. A few ways I thought of to approach are below. The bold face denotes the part of the idea that I feel needs the most of a reality-check:

Question: Can any of my ideas for my Earth mass Siamese twin planets to take form be plausible? If you so desire, feel free to hypothesize your own set of "perfect storm" circumstances.

Success Metric: Create Earth mass Siamese twin bodies (can't really call them planets any more, because they are not round) that remain so for at least 100 million years (in other words, it doesn't have to be permanent). If the solution is statistically remote, that's ok. The key is just not violating any known laws of physics. Further Clarifications:

TL;DR: Not likely. What you are looking for is called a contact binary. But you could have non-contact binaries.

Once they enter the slight join phase, any speed or other force keeping them apart will be outperformed by their mutual attraction. The effect of your rogue black hole can't be stable, and the relative speeds of the planets will slow down as they fuse.

A planet with enough mass will necessarily become rounded by its gravity in the short term (astronomically speaking). This is called hydrostatic equilibrium.

The gravitational influence of other bodies, or its own spin can make it more eccentric (a spheroid rather than a perfect sphere), but it will still be pretty round.

How much mass gets an astronomical body to hydrostatic equilibrium (HE)? It will depend on the planet's composition, but having a liquid interior helps a lot. Anyway, the answer is far less than Earth's.

As a reference, Saturn's moon Iapetus is the biggest object in the solar system known not to be in HE, but still round-ish: 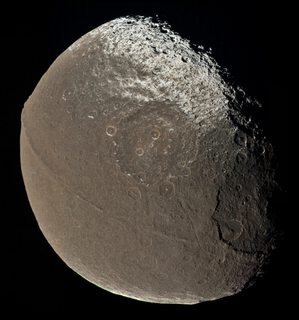 Iapetus as seen by Cassini. Taken from Wikipedia

Its mass is 1/5000th that of Earth. About anything above that would become rounded.

Although a mass limit above which everything becomes in HE is difficult to obtain, it helps having a few ideas in consideration:

As for non-contact binary planets, they are possible. Bear in mind the closer they get, the more likely they are to be tidally locked.

If they get close enough, tides will slow them down and make them less able to keep distance. Once they get even closer, they'll become a contact binary, but it will be short lived in astronomical scale. their atmospheres will cause friction and they'll quickly decay into a (catastrophic) collision.

There is a number of contact binary stars, almost touching, but separated by their own pressure. After several million years they start sharing a common envelope (atmosphere-analog), but they are theorized to either expel part of their envelope, losing contact, or merge within a time frame of years (not millions, sorry).

Contact binary stars seem to be less frequent as the mass of the involved stars decrease, because they become less stable.

Can any of my ideas for my Earth mass Siamese twin planets to take form be plausible?

No, not for an Earth mass body

the Siamese twin planets appears big, but have hollow cores

This configuration is highly unstable: the more dense material will sink toward the center of mass. So the hollow center would not last, especially after an impact which will necessarily melt part if not all of the planets

you start from a sphere. you can either get an ellipsoid because of rotation, or a bulged shape by constant pull from one direction.

Can any of my ideas for my Earth mass Siamese twin planets to take form be plausible?

Yes. It is called a Rocheworld, or Contact Binary

The earliest fictional example I know of is from physicist and hard-SF novelist Dr Robert L. Forward, who uses the term Rocheworld. The term Contact Binary also exists, though it is more commonly used for stars.

Here is another example made by another physicist, Dr Luke Campbell. Side-note: Vergeworlds is a quite fascinating hard-SF setting, and I recommend looking at it for both its tech, Fermi-compatible aliens, and Relativity-compatible FTL method (two words: "causality attack").

The reason it works despite being in each-other's Roche limits is because Roche Lobes and, at those scales, the fluid nature of the bodies mess things up.

There are two interesting consequences to keep in mind, on such a world. Despite the variable gravity, it is always normal to the surface: the ground is always horizontal, even in the weird region where the two lobes are touching. And the atmosphere has the same pressure everywhere: if the minimal surface gravity zone is too weak to keep atmosphere, there won't be any atmosphere on the entire surface.

Not the answer you're looking for? Browse other questions tagged reality-check planets physics earth-like or ask your own question.

55
Could two planets be tidally locked to each other so close they share their atmosphere?
17
Can a habitable planet have two separate crusts, both of which can sustain life?
6
What would happen to the Moon if it was lowered onto the Earth?

14
Can a habitable planet have mini-suns (i.e. solar satellites or glowing moons)?
2
What would be the conditions and causes that would make a planet not spherical?
9
What are the climatological effects to the surface of a planet where the atmosphere gives way to vaccum? (diagram included)
14
Are trojan planets possible? Are habitable trojan planets possible?
110
Would planets be cubic in my "cuboverse"?
2
Is it possible to make a stable planetary system like this, and what would the orbits have to be?
5
How Would These Planets Affect Earth's Eccentricity?
7
Concerning asteroids and a trojan habitable planet
17
Is there any realistic explanation for Earth-like climate on a Sun-sized planet?