This is my first question so any feedback is appreciated! I basically have an Earth analog that has an axial tilt of approximately 12 degrees instead of Earth's 23, and I wanted to find out how I could approximate the length of the longer polar nights the flora and fauna would be subjected too. Thanks!

Edit: I would also like to know how I could approximate how much of the planet would be affected by this polar night, as in what latitude to the pole would the polar night cover. 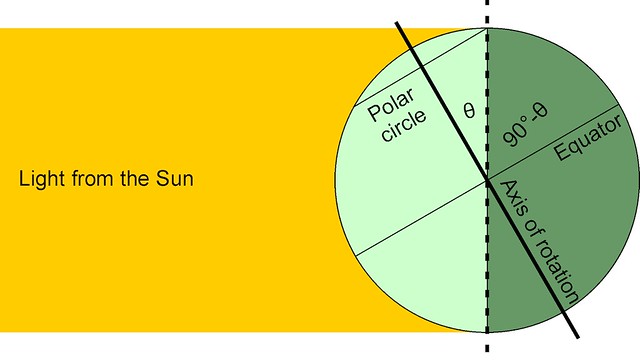 The relationship between the axial tilt angle $\theta$ and the latitude of the polar circle, $90^{\circ} - \theta$. The planet is shown at the summer solstice. Own work, available on Flickr under the CC BY-2.0 license.

As shown in the picture, the pole stays in the light for one half the year, and then will go into the shadow for the next half. A point exactly on the polar circle, at a latitude equal to 90° minus the angle of axial tilt, on the day of the summer solstice will remain in the light for one full rotation; the daytime will be almost three full solar days. Any point between the northern and the southern polar circles will never experience a day or a night longer than one full solar day; but, of course, near the polar circle the night time (or the day time) can be very brief. For example, on our Earth, Leningrad is famous for its white nights.

Not the answer you're looking for? Browse other questions tagged planets axial-tilt or ask your own question.

6
Temperature on a 14-days day planet
5
Day/Night temperature variation on tidally locked binary planets
5
I'm building a fantasy world like Earth but it has two moons adjacent to each other in a co-orbital configuration and need help
6
Can a planet have warm or temperate climates within its polar regions?
2
A desert planet with temperate polar regions could sustain how much plant-life? Any?
2
If the Earth's axial tilt increased, how much farther would the Earth need to be to have the same climate, if possible?
6
Habitability of a Low Axial Tilt Planet with a Planetary Ring