Could a world exist with a distinct line of changing temperatures between the hemispheres?

I'm trying to create a world where there's an equator-like divide running along the axis(?) of the planet and the two hemispheres are perpetually different in terms of temperature. Basically, I want one side of the world to always be warmer than the other side and for the temperature change to be noticeable when crossing over an invisible "divide".

I'm not a physicist and I know very little about astronomy so my thoughts on this might be completely off track, but I was thinking that maybe a circumbinary planet with two stars of differing heat intensities might work? But I think that would affect the changing seasons more so than the relative temperatures of the hemispheres, is that right?

From what I've read, the angle of the planet in relation to the sun is what causes the difference in global temperature, but I don't think that wouldn't create the drastic change that I'm looking for. Any thoughts on how I could make this work? 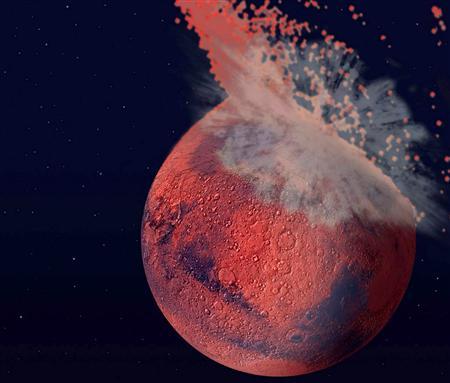 Your world was hit by a large impactor. On resolidifying, the iron core of the planet was no longer in the center of mass. A large lobe of silicaeous material overlays one hemisphere and what was once the metal core is displaced, to the opposite hemisphere.

The metal core conducts heat, and also provides substrate for eddy currents and ohmic heating. The hot metal core is close to the surface in that hemisphere. The entire hemisphere has a situation much like Iceland with ample geothermal heat. This is the hot side.

The far site is insulated from the core by the overlying light materials and has essentially no geothermal activity. It is warmed minimally from the core and only by the sun, which is distant and dim. This is the cold side.

Take a planet like Mercury, with no atmosphere, and have it tidally locked with the central star. When you cross the terminator (the line dividing the day region from the night region) you quickly go from "scorching hot" to "hell has frozen cold".

The lack of atmosphere will take care that no diffusion of heat takes place.

TL;DR It can be done, but there would be huge storms as a result.

Long explanation The only natural phenomena that I can think about that would be able to produce this sort of result would be tidal locking. Basically what happens is that a planet is so close to its star that the gravity makes it spin at the same rate it orbits the star, making one face of the planet permanently fixed to the star. From the planet's perspective, it would be like a sun that never moves. Now, this has its complications, mainly the following:

1.- Having a tidal lock on a star like our sun would melt half of the planet so in order to be habitable the star would have to be a red dwarf: in other words, a very small and cold star.

2.- Even with a small star the temperature would be really high on the bright side. Just to put in perspective, the sun for such a planet would occupy probably at least half of the sky; on the equator, temperatures would be enough to melt rock. Probably the habitable part would be on the twilight between the dark side and the bright side.

3.- But talking of the dark side, it would be incredibly cold, freezing solid oxygen kind of cold due to its permanent shadow if it weren't due to the next point.

4.- You have atmosphere, and storms within atmospheres are driven mainly due to heat differences. When air is hot, it expands; when it's cold, it contracts; and when a cold mass of air crashes with a hotter mass of air, they start to combine, expanding and contracting respectively creating something called eddie currents, which are common to what we call a tornado. On Earth, this happens when the sun heats the sea and its hot air crashes with the cold air coming from the poles, and the greater the difference the greater the force of the storm. Now on your world we are not talking just about a small gradient like here on Earth. We are talking about air as hot as melting rock crashing with air cold enough to freeze oxygen; there would be global storms stupendously huge engulfing the planet all the time, making the dark side somewhat warmer and the bright side somewhat colder than they would be otherwise, but the air speeds would be just amazing, probably in the hundreds of mph. Actually there are some scientific studies on this.

Over the course of ~25,000 years, Earth's axis precesses; the North pole points at different places in the sky. This is caused by tidal forces between the Earth, Moon, and Sun. It should be possible in a more complex solar system for this precession to happen much faster, such that the axis precesses at the same rate that the planet orbits the sun. This would lead to one hemisphere always being tilted toward the sun, and one always tilted away; a summer hemisphere and a winter hemisphere. Unlike a truly tidally locked planet, both hemispheres will have a day-night cycle. The summer hemisphere will have longer days, the winter hemisphere will have longer nights. Depending on the elevation, there may be peaks of eternal daylight at the summer pole, or valleys of eternal night at the winter pole. The tidal forces necessary to make the precession happen this quickly would lead to some extreme tides; perhaps hundreds of meters or more. The unbalanced heating would also lead to some pretty extreme weather, especially near the equator.

Not the answer you're looking for? Browse other questions tagged reality-check planets physics astronomy temperature or ask your own question.

4
Seasons on a circumbinary planet
15
Stabilizing the Temperature On a Planet With a (Very) Long Day
8
How to create a “twilight” world around a red dwarf star
9
A Planet Where The Four Seasons Occur Multiple Times In One Year?
2
What's the climate consequences of a planet with these characteristics?
29
Keeping an “hot eyeball planet” wet
12
Can planetary bodies have a second axis of rotation?
4
How can I have an Earth-like moon?
2
Calendar-Worthy Events on a no-axial spin distant future Earth