Are lithotrophic animals possible and if so how?

A class of organism, lithotrophs, use minerals (inorganic substrates) for energy conservation/reducing equivalents in biosynthesis.

However such organisms on Earth are limited to single-celled prokaryotes in the Domains Archea or Bacteria.

The question is, are higher organisms, specifically animal-like lithotrophic organisms (as opposed to plant-like or fungi-like) possible?

If yes, what would be the evolutionary justification? (i.e. How would the organism work?)

The main problem with higher organisms of this kind, is the lack of useful inorganic substrates that are also abundant. Let's assume that the lithotroph only uses minerals for energy conservation and not as a reducing equivalent (it either uses organic sources, or CO2 fixation probably the former since its animal-like). Let's also assume relative abundance of the necessary inorganic substrate (but not as much as gaseous substrates like O2), and unavailability of better oxidants (again, O2)

I've been slacking lately on biology questions, so I'll try my luck on this one. 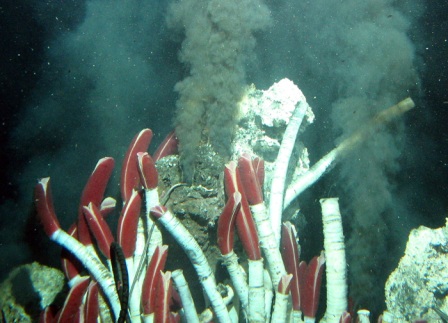 These things are, believe it or not, animals. Not plants. Not fungi. Animals. Females release eggs, males release sperm, the two joyfully meet, and the resulting offspring settles down on a rock somewhere in the deep, dark, despondent dreary depths of the lower levels of the ocean. They can grow up to 8 feet long and are thought to live for hundreds of years, though, like so many things at the bottom of the ocean, nobody really knows.

Giant tube worms like hydrothermal vents. These vents can emit water (often as a supercritical fluid) at temperatures of over 400°C. They also happen to form the backbone for a vast undersea network. Why? The water they emit is mineral-rich, containing, among other things, H2S - hydrogen sulfide. Certain types of bacteria love this stuff, and they can undergo chemosynthesis. These bacteria are lithotrophs, undergoing one of several different reactions.

The upshot of all this is that giant tubeworms need these bacteria for survival. They have no mouths or digestive system, but they can use the result of the bacteria's chemosynthesis to survive.

"Ah," you say, "but these tube worms are not directly lithotrophs. They're merely in a symbiotic relationship." Think about mitochondria. One theory of their origin states that they were originally prokaryotes. Yet now they serve an incredibly important purpose in many eukaryotes. What's to stop giant tube worms from eventually treating lithotrophic bacteria the same way?

We tend to think of animals as organotrophs and we assume that only bacteria and archaea can be lithotrophs. It's true that there are no animals known to rely on inorganic compounds as a major energy source. Would it be possible for an animal to get its calories from an inorganic source instead of from carbohydrates, lipids, and proteins? Many of the energy sources used by lithotrophs (e.g., hydrogen sulfide or iron) would be toxic to most animals if consumed in quantities large enough to supply the body with energy. Sulfur is considered relatively non-toxic and is rich in energy - lithotrophs obtain 149.8 kcal/mol from the oxidation of sulfur (see Wikipedia page on lithotrophs) (Sulfur has an atomic weight of 32.06, so that gives us 4.67 calories per gram). Could animals use elemental sulfur as an energy source? Animals do get sulfur in their diets (in their amino acids), but using elemental sulfur as a significant calorie source would mean consuming several hundred grams a day. There are few reports of anyone ingesting even a couple of grams per day. People have just assumed that much sulfur is toxic since it can react with organic compounds to form deadly hydrogen sulfide. Whether you could prevent this interaction by not eating organic compounds with the sulfur is uncertain.

There are animals that benefit from sulfur oxidation, like the tubeworm, but they have bacteria inside them that oxidize the sulfur compounds for them. However, one species of ray-finned fish (S. reidi) can oxidize hydrogen sulfide in its mitochondria (just like glucose) to produce ATP (a store of food energy).[http://sulfide-life.info/mtobler/images/stories/readings/grieshaber%201998%20annu%20rev%20physiol.pdf, see pg 43]. Whether sulfide oxidation can contribute a significant amount of energy to these animals remains unanswered since sulfide inhibits respiration at high enough levels (see pg 45). We humans can most definitely oxidize sulfur in our mitochondria too. We have all the enzymes needed to oxidize elemental sulfur all the way to sulfate, including sulfur dioxygenase (to oxidize sulfur to sulfite) and sulfite oxidase (to oxidize sulfite to sulfate). And we conserve energy from the process. That's right. When our cells oxidize sulfur, we actually make ATP (see, for instance, https://www.ncbi.nlm.nih.gov/pmc/articles/PMC1347283/).

Not the answer you're looking for? Browse other questions tagged biology society .

6
Can a large animal get nutrition from minerals?

2
Would it be possible to have an ecosystem that includes large plants and animals between two metal slabs that are less than 1mm apart?
15
Are four lungs possible and what would their effects be?
3
A rapidly reproducing, lithotrophic slime mold
6
Can a large animal get nutrition from minerals?
3
What animals in North America are rideable?
8
Are "plants" and "animals" inevitable on an alien planet?
4
Anthropomorphic animals and chew toys?
33
How dangerous are animals with no history of human contact?
7
Are bacteria patties possible?