How plausible would a fully aquatic bat be?

So, it turns out that bats are actually pretty good swimmers; several species of bats have been reported swimming, and they're far more capable and agile in the water than they are on land:

If you think about it, some of the bats' unique evolutionary features could be extremely useful in an aquatic lifestyle. They already possess echolocation which is arguably more refined than, and superior to, that of cetaceans. Bats also have the most efficient respiratory and circulatory systems of any mammals, and their wings enable them to manoeuvre more accurately than birds, and fly more efficiently, with less drag and less energy loss.

Bats' Merkel cells also have tactile hairs which allow them to detect and adapt to changing airflow, enabling them to judge the most efficient speeds to fly at, helping them to perform complex manoeuvres to capture prey in flight, and even helping them to sense prey from the disturbances in the air. In the water, Merkel cells could potentially be even more important and advantageous. Shallow torpor and heterothermy would also be extremely useful.

And a full aquatic lifestyle would also remedy many of the bats' greatest weaknesses and limiting factors, such as most bats' inability to walk on land, along with their increased levels of respiratory and cutaneous evaporative water loss, which would cease to be an issue in an aquatic environment. Bats have already lost their sweat glands on their wings, and require more fluid intake relative to their body size than any other mammals (including cetaceans), making them highly susceptible to blood urea poisoning if they don't receive enough fluid. The most common cause of death for bats is dehyration, not predation; something that fully aquatic bats wouldn't have to worry about.

So, how plausible do you reckon it'd be for a lineage of bats in the future (perhaps the Noctilionidae, since they're the world's most amphibious bats at the present time) to evolve to become fully aquatic to the same degree as cetaceans, spending the entirety of their lives in the water and not returning to land at any developmental stage? What do you think that these aquatic bats would look like, and how large could they potentially get- would it be feasible for them to reach or surpass the size of manta rays? And what's the shortest timeframe that you feel such a lineage could plausibly evolve within, from the present day- 5 million years from now? 10, 20, 50?

In his 1981 book After Man: A Zoology of the Future, the paleontologist Dougal Dixon postulated that 50 million years hence, semi-aquatic bats would evolve. He called them "surfbats".

This is a paragraph on the surfbat, typed out from my copy of the book:

The beaches are home to the packs of surfbats, Remala madipella, which fish in the shallow waters around the coral reefs. Their hind legs, wings and tail flaps have developed into swimming and steering organs and their bodies have become sleek and streamlined.

His basic premise was that a chain of islands popped up in the Pacific on a volcanic hotspot, and bats, not birds, were the first to colonize the island. They diversified into a myriad of forms, occupying many niches on the islands he called Batavia.

However, these are only semi-aquatic, like pinnipeds. They come ashore to rest, breed, nurse and give birth. Nevertheless, I know of another speculation on future aquatic bats.

These are two screenshots I cropped from the picture "TFiF: Bats, the titans and the tiniest". It was drawn by Fabio Alejandro, known as Dragonthunders on Deviantart and the speculative evolution forums. 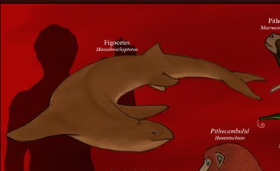 These are future descendants of bats belonging to the family Figocetes, the genera shown being Massobrachypterus and Eosicnidus. Here is what he writes about Figocetes:

This clade Icaroptera specialized to inhabit the aquatic environment, in the same way as its predecessor’s the cetaceans, changing all their morphology. Descended from semiaquatic clades that inhabit the rivers and lakes of South America, expanded outside the continent and managed to colonize much of the ocean, however, they have failed to compete with several new marine tetrapod descendants of tegus and even other aquatic mammals, so are limited in length and diversity, however, they have been able to find their place in the planet's waters.

Alejandro's project, The Future is Far, chronicles the evolution of life from 12 million years hence to 1 billion years hence. In his scenario, the bats became one of the most diverse mammal clades on the planet, eventually losing their wings and taking on a plethora of bizarre forms.

Evolutive convergence would make them not so dissimilar from penguins or dolphins: hydrodynamic profile, short and fin shaped limbs.

Under water the membrane they presently use for flying is too flimsy, so it will be quickly replaced by something more suited. Also echo location would need to adapt to the new environment, but that is what dolphins already have.

Also size should increase: water is more effective than air at subtracting heat from the body, and small, mouse size bats would have a hard time controlling their temperature with a small body.

Considering that whales and similar water mammals have evolved into the past 50 million years, I envision a similar time span for their evolution.

Not the answer you're looking for? Browse other questions tagged biology creature-design evolution far-future mammals or ask your own question.

6
How would aquatic sapience evolve?
5
Creating a fully aquatic bird
12
Possibility of bipedal mostly-aquatic species?
15
Let's evolve whales and dolphins back onto land
10
Could a hexapodal bat actually fly?
13
Would biological hydraulics be worth evolving in tetrapods?
5
Can land-living endotherms exist without hair, feathers, scales etc.?
8
How big could a land-dwelling arthropod get if it wasn’t limited by oxygen consumption?
10
How does an aquatic creature farm land animals?