Yes, this is about Dr. Evil's dream: Sharks with frickin' lasers. Except that the lasers would not be artificially attached, but be part of the animal itself (bio-lasing instead of simply bioluminescence).

In short: Would it be possible for an animal (shark or otherwise) to grow a laser at its head and put it to use? This could be a genetically engineered animal, but the laser is supposed to grow, not to be artificially attached, and the animal is supposed to be able to use it "naturally" (that is, without needing special training, similar to how it uses e.g. its voice or its muscles), either for catching/killing prey, or for fighting predators or other animals which pose a danger, or maybe even simply for signalling (similar to a laser pointer).

Unfortunately this is no more powerful than a very weak laser light and not really potent as a weapon and it's not all too clear if this can be scaled up. I have no issues with a bio-optical cavity capable of enhancing the laser light, however it appears it's a bit too weak to be anything special. The applications of these GFP's as far as medical use is pretty outstanding, but from a bio-laser weapon standpoint...it's not very likely.

How about sharks with fricken laser pointers on their head...maybe they can blind a pilot or two, and really add a spinning light show in the event of a sharknado.

The cell itself does not emit the laser light...the cell is put into an optical cavity, fed pulses of blue light, and then the directional laser is emitted from the optical cavity.

Depends on what you want it for, Sharks live in the water, so if you want it to be a killing laser, then it would have to produce a LOT of energy to travel through the water and still have enough to poke a hole in it, you might have more luck in 'cooking' it than killing it with a hole. Most likely it would be almost close enough just to eat it before it becomes really dangerous.

Now sending enough juice to heat up the water and make it boil might be a way to confuse the fish, but dolphins already use air bubbles to corral fish.

David Brin had species that used lasers as bats use echolocation, for distances etc. This could be a use for it to come about, down in the dark depths.

No, but as a consolation prize you can have it shoot lightning from its eyes. 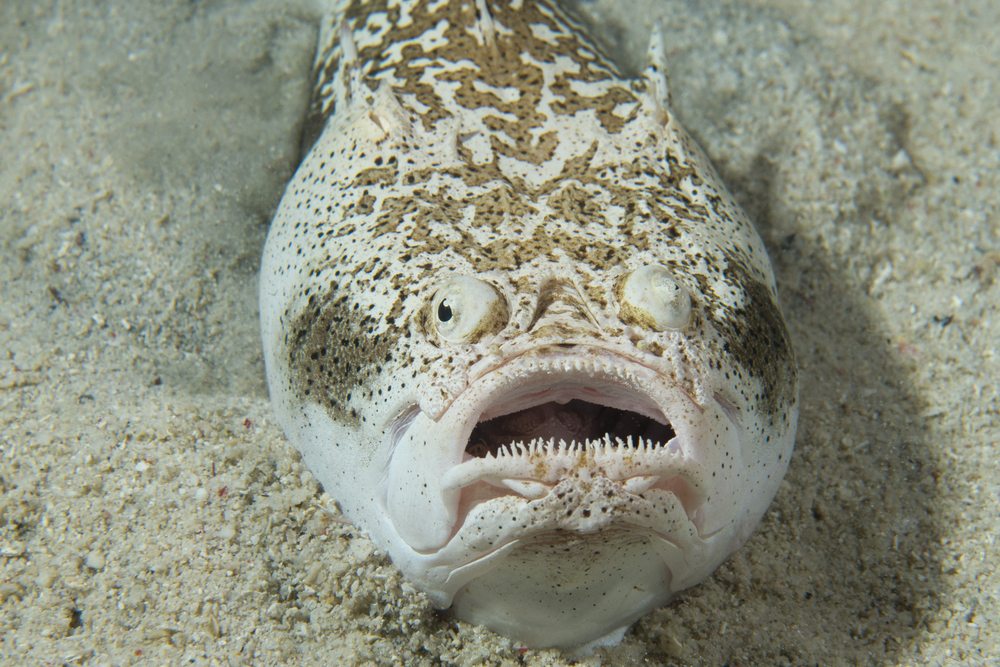 This is a stargazer (specifically Astroscopus spp.). They are a type of fish native to the Atlantic and Pacific coasts of North America. They are also unusual in that they can deliver painful electric shocks to disable prey and ward off predators, like electric eels and torpedo rays. However, unlike these fishes, the muscles that generate an electric potential in stargazers are its eye muscles. So basically, it just has to look at something it doesn't like and it sends a jolt of electricity from its eye muscles into the water. That said, it is somewhat controversial how powerful this shock is, mostly because there doesn't seem to be any good estimates of its amperage (which is the dangerous part of any electric fish's shock).

Given that cartilagenous fish have evolved the ability to deliver electric shocks before (torpedo rays), it would be relatively easy for one to convergently develop a method of shocking similar to the stargazer.

Not the answer you're looking for? Browse other questions tagged science-based reality-check creature-design or ask your own question.

22
Evolution of a creature that uses light as a weapon
30
Can a biological laser exist?

5
Really big sharks
16
Do powerful lasers mean no aircraft is safe?
4
Using lasers to transmit solar energy
0
Creating resonation with lasers
4
Gravitational lenses for focusing giant lasers
6
Could modern sharks adapt to live in deep water?
3
How could the marine ecosystem be affected by aggressive, super-intelligent sharks?
9
Ways to detect lasers from afar
4
Could Sharks Survive a Longer PETM?