On an Earth-like/Earth-size planet what would be the meteorological effect of a zone, maybe 300 kilometers across, about 20 degrees latitude, in the middle of a northern hemisphere large continental mass, which was permanently extremely hot e.g. average day temperature of over 80 degrees Celsius at its epicenter, the residue of an elemental spell gone wrong. 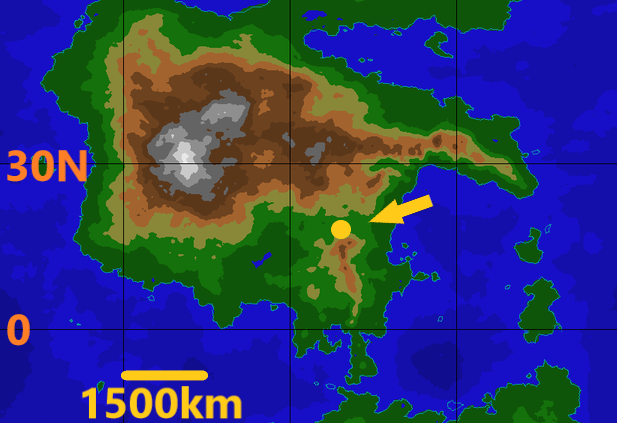 From a physics point of view the incoming heat comes from outside this plane. There is a parallel zone on the other side of the planet where heat is being lost at the same rate so the planet as a whole remains in stasis.

But, locally, I assume this heat would impact weather creating the equivalent of an extremely low pressure zone? Is this heat a magnitude greater in impact the sun has on our planet? Would that spin off low pressure areas that move? Which direction? Would there be rain/wind effects and how would that be impacted based upon distance from the oceans? It's only just north of the equator so I assume that moisture bearing air would be coming from its south?

Edit: so, based on my school level Geography lessons and your questions below I'll add what I hope would be useful clarifications.

1.There would be a coriolis effect that acted identically to that on Earth. 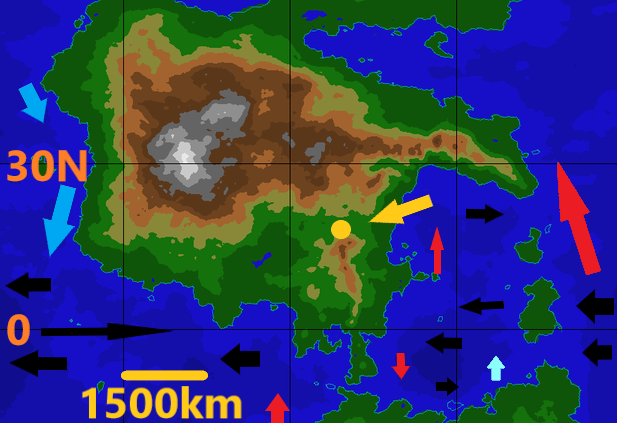 So, I think that it's the path of any storms generated by this that interests me the most. If this effect created a constant flurry of storms, and assuming enough moisture would they be of hurricane/cyclone type strength and where would it head off to? Easterly direction I think?

The impact on vegetation is more complex than I'd assumed initially, which is also quite interesting.

L.Dutch has laid out the expected wind patterns quite well I would only add a couple of things to his analysis.

You would see a spin off of large storm systems in accordance with your world's Coriolis Effect, if any.

Some notes about the biomes you might expect to see around this anomaly:

The centre of the area is going to be a very hot dry desert space, the radiant heat from the 80°C ground is going to prevent any rainfall from reaching the ground itself, causing something like a Dry Thunderstorm only continuous.

Around the slightly cooler outer margins you'll have a weird tropical grassland like nothing I know of on Earth, where the temperatures are still so high they prevent a lot of rainfall from reaching the ground but the climate is annually uniform and very warm like we see in the tropics on Earth just a lot drier.

Farther still from the epicentre you'll get one of two things, I think more probably a wet desert, the rainfall is so high and so continuous that it strips the ground to bedrock on which nothing can survive. Possibly if the rainfall is low enough you'll get tropical rainforests, and you're likely to see these in sheltered areas and drainage basins in and around the wet desert as well. The difference between these two is going to be about ocean surface temperatures and how much water the surface of the sea is giving up to the air. As you've pointed out a lot of potentially very moist air is going to be brought up from the tropics but if there are cold surface currents analogous to the Humboldt then net evaporation and precipitation will be much lower.

Out towards the coast things will be more settled when it comes to actual storms but the constant winds will impair the growth of large plants and will bring little moisture. On a human note they'll also make maritime pursuits extremely difficult because to get off the shore you'll always be trying to sail upwind.

The permanently warm area would start a chimney of raising air, sucking in air from the surrounding. Considering the topography of the region as suggested by your map, the dominant flow would go along the red arrows in the picture 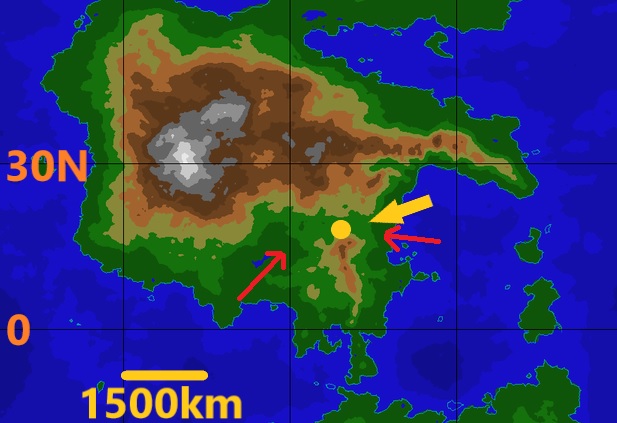 From both paths the air would be coming from above the ocean, so it would likely have a fair amount of humidity.

Cooling down while raising, this humid air could probably increase the local amount of precipitation.

Further details are hardly speculated, without knowing the general scheme of circulation in the world.

Mind that the anomaly point seems to be located at saddle point on the topography of the region. This means that the air stream rising in both the valleys would be accelerated by the narrowing sides, like in a Venturi, giving interesting effects due to continuous strong winds.

Not the answer you're looking for? Browse other questions tagged magic climate .

10
What would the weather on this continent be like?
22
Are tropical fjords possible?
7
How would a large arctic mountain range affect the weather?
4
What vegetation/biome could I expect in a tropical region at an average temperature of 8-9 degrees Celsius?
2
What rough climate and/or biome classifications would I assign to a planet with 31.1 degrees axial tilt?
2
Does my climate map work?
4
Climate of a continent in an endless sea
19
I want ten Earth-years long day on my planet. Can I have it?
3
Help with Pressure, Winds, Precipitation and Climate Zone
1
What would the Climate effects of a Circum-Equatorial current be on a world with 0 degrees of axial tilt