Can a large animal get nutrition from minerals?

Lithotrophy is a phenomenon known from microscopic life, where an organism converts inorganic substances, usually minerals, into energy.

So, we know that a single-celled life form can do this, but what about a more complex one? Could a macroscopic, motile, animal-like organism feed on minerals, like iron or sulfur, and if so, how would it work?

I am asking this question for use in the construction of an alien planet, with which I want to break the trend of Earth-like aliens seen in most popular movies and books featuring complex extraterrestrial life.

The organism(s) in question shall be as large as humans or bigger, have multiple legs, and hard endoskeletons. The reason I'm asking this question is a) I'm not a biochemist, b) this phenomenon has never been observed in macrofauna, and c) I can assume that it would bring a host of side-effects and possible ramifications.

In an answer, I'm hoping for a "yes" or a "no", to indicate whether it's possible, and then hopefully a few words on things like digestion, biochemistry or any other things I need to know to understand how the organism works, not just know what it does.

Please note that I have had a look at the question Can anything survive by eating rocks and other ground minerals? and it does not answer my question. It asks if there are any real-life lithotrophs, which I know and made clear in the first sentence of the question. It does not proceed into the realms of speculation which I'm looking to enter, and the OP also does not want to understand how this phenomenon would work.

Sure. You would need the animal to harbor a population of commensal bacteria to do the metabolic work for it. One example of such an animal is the giant shipworm, a mollusk whose commensals feed it via hydrogen sulfide metabolism. 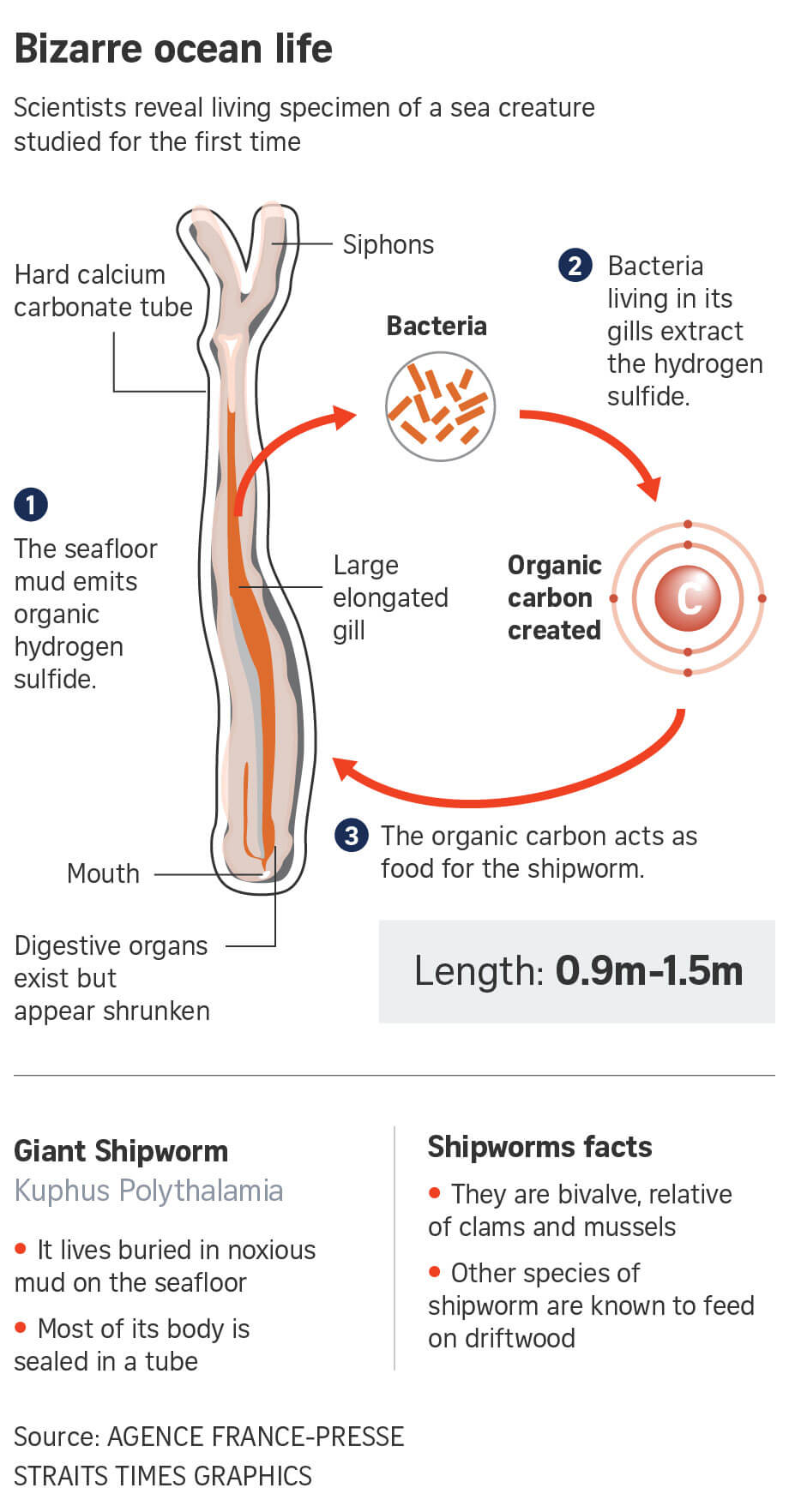 Instead, the shipworm does not eat, they rely on a beneficial symbiotic bacteria living in its gills. The bacteria use the hydrogen sulfide as energy to produce organic carbons that feed the shipworms. The process is similar to the green plants' photosynthesis to convert the carbon dioxide in the air into simple carbon compounds during photosynthesis. Scientists found that K. polythalamia cooperates with different bacteria than other shipworms which could be the reason why it evolved from consuming rotten wood to living on hydrogen sulfide in the mud. The internal organs of the shipworm have shrunk from lack of use over the course of its evolution.

Giant shipworms are sessile. Could such an organism be mobile? Sure - the giant shipworms relatives are very mobile - they attack the wood of ships which is how they got their name. Their commensal bacterial help them digest the cellulose of wood. Large land animals which subsist on cellulose rich plant matter also have huge populations of commensal bacteria and fungi - the rumen of cows is a giant tank of such creatures, which break down and digest the plant matter eaten by the cow. In exchange the cow keeps them safe.

Your putative creature would have a rumen-like organ which would be full of archons or commensals of a sort which can perform the type of energy metabolism you want for your creature. The creature would seek out and ingest the mineral materials, providing them to their internal commensals.

Not marking this as a duplicate because I love of this speculative energy metabolism questions. Instead, let me suggest that for the interested, additional reading can be found on this site.

How would digestion work for an alien species with a diet of minerals?

This answer goes into some detail on how giant tube worms, which live in symbiosis with chemotrophic bacteria, work. The salient point is that they live off of waters rich in hydrogen sulfide, which is delivered to them by underwater vents.

However, from your description of the aliens in question, you don't want them to be sessile, clustered around places that happen to support them. You want them to walk around, graze, forage, what have you.

The problem there is one of energy. Humans (and other familiar animals) take in energy in the form of complex organic molecules, including fats, carbohydrates, and proteins, all of which have a substantial amount of bond energy that is (relatively) accessible. As a result, they have a lot of energy available to them for things like walking, chewing, higher brain functions, etc. Tube worms don't do much of that; nor do trees, or algae.

Lithotrophs don't have the advantage of preexisting organic molecules. They have fairly low margins in terms of the energy they get out of their environment, because the chemistry just doesn't give them as much to work with. It's actually much the same reason why animals aren't photosynthetic - it's not rewarding enough.

In other words, the problem is that rocks aren't as energetic as organic materials. Your aliens could theoretically sit atop a food chain of lithotrophic "plants", but that wouldn't make them lithotrophs any more than eating regular plants makes humans photosynthetic. (Your planet would also probably need a very strange atmosphere and crust to pull this off.)

Another way to think of it is like this: think of a human compared to the plants and other animals that human needs to eat in order to live. We can do complex things because we offload the grunt chemistry on other living things. That's just as true whether the initial source of energy is the sun, or metal oxidization, or something more exotic. (I wonder if you could have a radioisotope thermal-powered bacteria...) Baring some truly exceptional biology, an alien that is recognizably animal-like would need to similarly be higher up in its own food chain.

Not the answer you're looking for? Browse other questions tagged science-based biology xenobiology food biochemistry or ask your own question.

33
How would giant, secluded, underground-cave-dwelling insects get enough food?
13
Can anything survive by eating rocks and other ground minerals?
13
Are lithotrophic animals possible and if so how?
12
Multicellular chemotrophs?
3
How would digestion work for an alien species with a diet of minerals?

13
Are lithotrophic animals possible and if so how?
8
The Biology behind a slime that uses hydrofluoric acid to disable and digest prey.
5
Feasibility of Cyborg Trees?
5
How large could a blue whale get in a zero-gravity environment?