Is there any limit to how large terrestrial gastropods can be?

I know that practially all other terrestrial invertebrates are inherently limited in size, primarily by their exoskeletons, and by their respiratory systems, which impose upper thresholds on their maximum sizes depending upon oxygen levels. But is the same true of air-breathing land molluscs? In the oceans, all of the largest, most massive invertebrates to have ever existed have all been molluscs. Other than competition, and predation, is there anything preventing the hypothetical evolution of gastropods the size of the very largest cephalods, like giant squids?

Other than competition, and predation

When you are on land you cannot rely on hydrostatic to hold your body. And with no skeleton (endo or exo that it be), I have an hard time imagining a large sized gastropod moving around without collapsing under its own weight.

Aside from Jabba, being a fictional character, the largest slug and the largest snail on earth are rather small (but still somehow yuk) 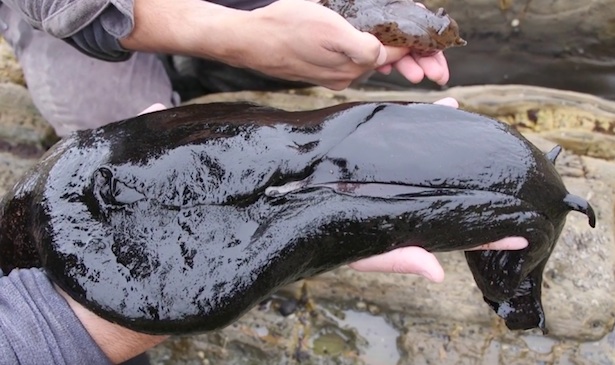 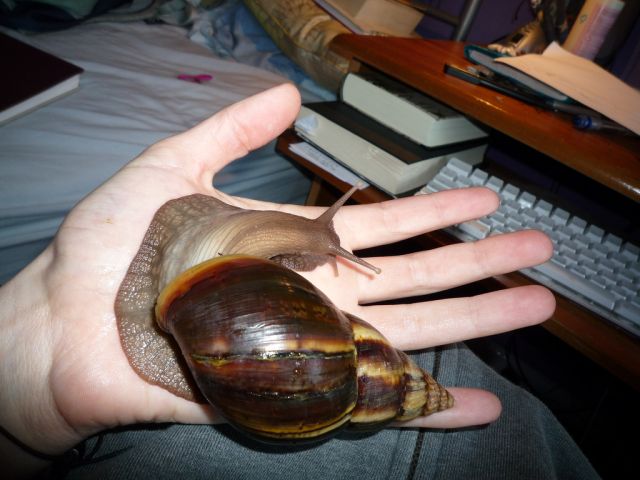 The largest sea slug is Aplysia vaccaria at 99 cm and 14 kg and the largest sea snail is Syrinx aruanus and has a shell length of 91 cm and a weight of 18 kg.

The giant and colossal squids, the largest mollusks and the largest invertebrates overall, are also aquatic. Terrestrial gastropods are severely limited in size compared to their aquatic counterparts.

Speed and drying out are going to be your two biggest issues. Gastropods rely on creating a trail of mucus in order to move around, and the water to create that mucus has to come from their own body. However, doing so is very inefficient in terms of water balance. This cost is going to skyrocket the larger the gastropod gets, because it has to expend more water to move a greater mass a relatively shorter distance relative to its length. This may also restrict the environments these animals can live in (most terrestrial gastropods today live in damp environments).

Gastropod locomotion is also incredibly slow. With this, the animal runs the risk of not being able to move far enough in a day to find enough food to eat. Larger gastropods may be able to move faster due to larger size, but the greater mass could potentially slow them down even more than it does small gastropods. At some point in size sheer weight may outweigh any benefits to locomotion the mucus gives anyway.

You could completely re-engineer an new method of locomotion similar to The Future Is Wild's desert hopper, but by then you've diverged so far from the gastropod body plan that anything could apply.

Not the answer you're looking for? Browse other questions tagged science-based reality-check biology evolution future or ask your own question.

12
Are there any real-world ingested poisons with these characteristics?
6
How can humans avoid killing any insect?
12
Cameras replacing human eyes after an accident: Is there a limit to how high resolution the brain can process?
24
Are there any benefits to a large body of water in a space habitat?
2
How large can a terrestrial, territorial pack carnivore get before we can no longer domesticate it?
6
Is there any way to Terraform Ceres?
5
How to evolve fully terrestrial sharks, 100 million years in the future?
14
Planet-wide vocalizations: is there a natural limit preventing it?
3
How large can an animal's eye realistically get?