Can I monitor animal movements from space?

The Earth-like planet I'm working on is the culmination of years of labor by the galaxy's best scientists. It consists of fully artificial ecosystems, and is, for all intents and purposes, like Earth. The life-forms are carbon-based and have similar structures, metabolic processes, and habits as animals on Earth. Since the scientists and engineers set things in motion, they have been monitoring the planet from the equivalent of Low Earth Orbit, in a number of spacecraft equipped to monitor the atmosphere, oceans, weather patterns, etc.

A new instrument has been proposed: a satellite capable of monitoring the movements of large groups of animals. In an effort to interfere as little as possible with the current ecosystems, the scientists removed almost all equipment and temporary artificial structures from the planet. This means, for instance, no tracking collars. Instead, the group wants to use what is essentially an Earth observation satellite, capable of taking pictures of herds of animals.

The test target would be the near-equatorial regions, including savannas, where there is little tree cover. The various species of quadrupeds there are roughly zebra-sized, and move in groups of about 50, give or take. They aren't migratory, but they do move around in search of new food sources, as well as to avoid predators.

What I'm currently thinking about is using optical imaging, as a reconnaissance satellite might do. The thing is, I have no idea if that's enough to observe herds this small. The satellite will have to be cobbled together using spare parts, so there's not a lot of flexibility when it comes to instrumentation. I'm therefore open to other methods besides optical imaging - although I can't see to come up with any. The technology is essentially that of present-day Earth (2018).

Using optical imaging or some other related technology, can my scientists correctly identify and track herds of these quadrupeds from Low Earth Orbit? Ideally, this would be done by directly taking pictures of the herds, but if another method is possible, I'm open to suggestions.

This is the same world as mentioned in a number of previous questions (1, 2, 3).

The angular resolution and the correspondent Dawes' limit put an absolute theoretical max resolution to any telescope. The bigger the lens and the closer the target, the better the resolution but remember that...

So, for a typical mirror of 240 cm of diameter we have a Dawes' limit of 0.048 arcseconds. With a typical orbit of 550 km that means a best optical resolution of 13cm. So is, each pixel of the camera represents 13 centimeters on the ground. With perfect cameras and no aberration of atmospheric losses, which of course we are not going to have.

That means that an elephant is going to be some like 10x30 pixels, but a dog is probably a blurry 4 pixels line. And that's without accounting with problems such as exposure, moving targets (both the satellite and the animals), atmospherical aberrations and the problem that a satellite can only make a picture of something every time it passes over, which usually means several hours after or even days.

You can make use of highly elliptical or other weirder orbits, such as Molniya orbits which can make your satellite approach to about 150 kms of the surface for a better resolution, but it comes with a cost in timetables - the satellite can only make good pictures at the perigee.

Yes this is possible, but at this time only with large groups of animals.

Scientists already watch colonies of penguins in Antarctica from space,bizarrely by the fact that their poo stains the snow/ice, so they actually track them using poo... i wish i was making this up

They are also capable of observing Wildebeest migration from space, however as you can see below, it's not the clearest thing to know what you're looking at, and only really acceptable because Wildebeest stand out from the grass they stand in, or roads, when the ground gets really dry, then it is possible to see the dust they kick up while moving en masse as well. but at this time this is not capable of tracking, as the satelites orbit in LEO, not geostationary so they can only take snapshots as they pass overhead 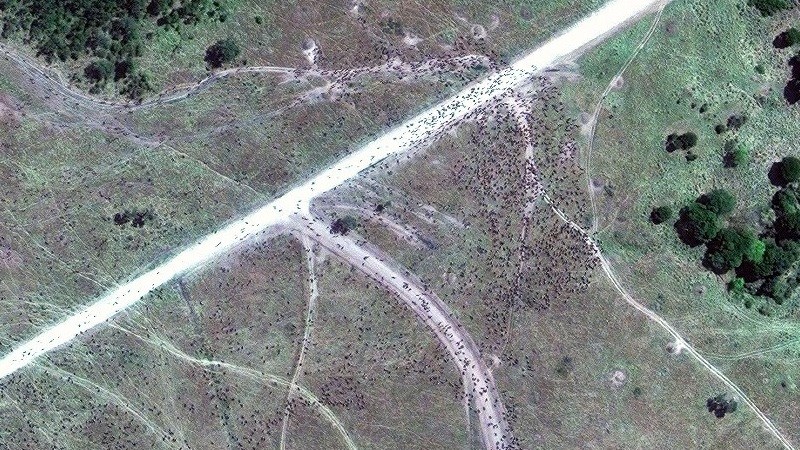 If i were to assume you have far better quality cameras on your satellites then yes this is doable, however... you have to remember that the cameras that can take these pictures have a very very small angle on their lenses, they can't take panoramic images because, to get the high quality and high zoomed images they reduce the angle drastically so they tend to increase the size of their images by taking multiple small images and then stitching them together in editing.

then there are the other generic design requirements none of these mean it won't work, but worth considering with the design of the satelite

The longer the focal length, the harder it is to maintain the stable image due to shift of the visible field. Your average mobile phone has a focal length of 3-16mm problably. Compare it to 57,6m (f=57600mm) in Hubble

Therefore, it is preferred to have larger single pixel size (and less resolution) to limit visible shake (as movement during exposure won't affect nearby pixels) while keeping sensor relatively small (easier to produce, operate, heat, less prone to failures), as the sensor size requires larger lens, which are heavier and harder to produce.

All this affects resolution. There also radiation issues - the semiconductors in space cameras must be resistant to radiation, which changes state of cells when collides with electronic circuits. This is just a noise that needs to be detected and suppressed.

You're getting close to a next hard enemy: outer space. This means hard vacuum, containing low density of particles, low baseline temperature (under 3 deg Kelvin), that's around -270C or -454F. its cold. But energy is still carried by radiation, coming from the Sun- it causes heating on the spacecraft. Therefore the equipment (sensor, mechanics,lens elements) must be capable of surviving both low and high temperatures.

Another issue is amount of information. The further the distance from the light source, the less amount of light can be reflected and reach the sensor. This required amplification, denoising, degraining and so on.

If you could stretch the timeline of satellite parts by just a couple decades, you would be capable of tracking individual animals quite well.

This is a piece of Vancouver, seen with today's satellites: 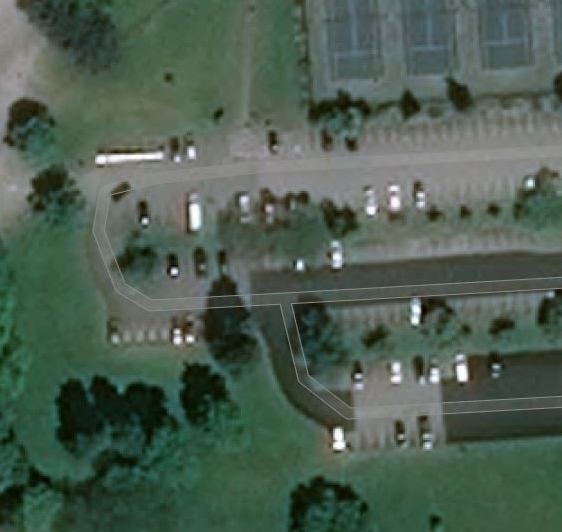 Remember that satellites will be moving around the planet - each satellite can only cover a piece of land for a limited time before it gets out of view. But if you have unlimited satellites, you can track bands of moving animals quite well at any time.

Now this is visible light. In order to see through clouds and tree canopies, you can use microwave radar.

Since what you really are interested in are animal movements, you don't want look at regular pictures... You want a motion map. You can do it by taking many regular pictures, and them combine them into a new image by applying the following formula:

You can, of course, introduce other colors and rules as you like. The point is that you will get the path that animals have walked in the last few hours, and the more recent places they have been on will be lighter in color. Superimpose this path over any regular image, or a map of the region, and you will actually see where the animals have been. You can also add time markers on specific points, so you may learn, for example, that they tend to go into a river by day, and by night they sleep under trees or something.

I believe the largest development for satellites in the last couple decades has been on electronics, not lenses. After all, Hubble is still taking amazing shots with just regular maintenance. With 90's technology, you would probably be able to do all I mentioned above, just with less resolution.

Mapping satellites will just snap whatever is under them, without tracking small objects. If a satellite is made to track a certain region, they can take long exposure pictures. Hubble is a kind of satellite that does this, though it only looks are objects away from Earth. With some tweaking to look at the planet, a satellite could take a picture of a region, and anything moving object would appear in the image as a line that covers its path. This is an example of a long exposure picture taken from Earth, a piece of Newcastle, in England - notice that the blue streaks are lights from the cars that passed as the picture was taken: 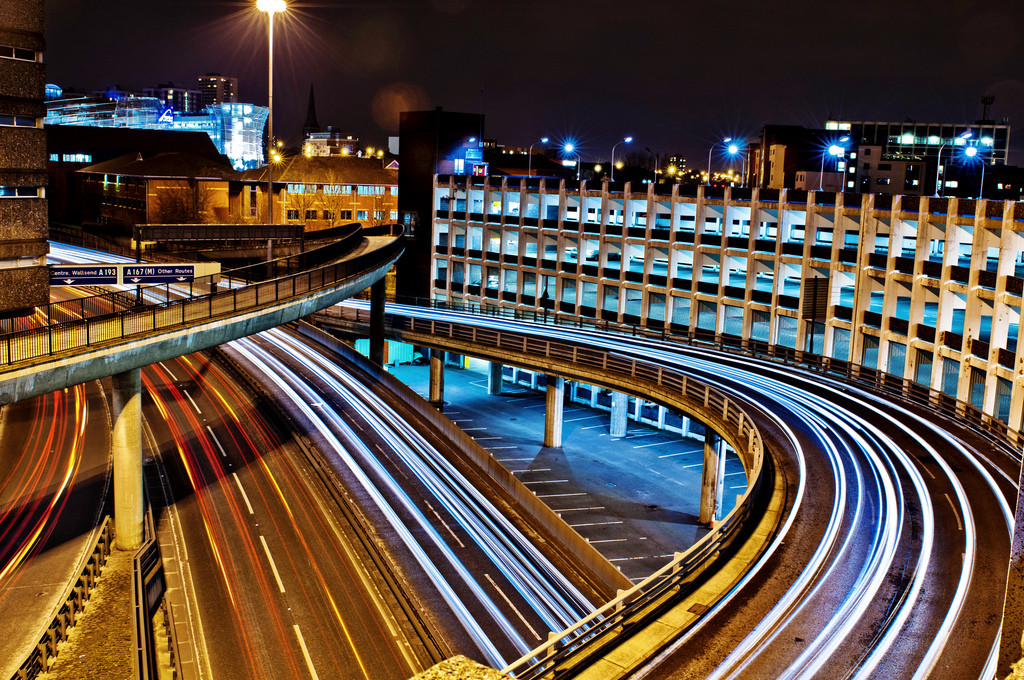 In order to give a satellite more time over a target, simple move its orbit up. The higher a satellite is, the slower its orbital speed at that point is, so it will stay longer over an area.

Not the answer you're looking for? Browse other questions tagged internal-consistency space earth-like fauna telescope .

24
Is a galaxy-wide language possible?
26
Can every animal eat most other animals?
19
What's the quickest way to add oceans to a planet?
8
How much can you learn about a planet while in its orbit?

26
Can every animal eat most other animals?
10
Planetary Colonisation; how to retain ethno-racial appearances over millennia?
3
Animal That Eats Planets
11
Feasibility of coilgun system for sub-luminar interplanetary transport
5
Visibility of explosions from space
6
Could Modern Satellites Monitor the Whole World's Military Movements
21
Could animal husbandry in space ever hold economic value?