Could an object from space crash into Earth and set off a majority of the nuclear bombs created?

I'm currently trying to create a separate kind of Earth, without just changing my setting to a world that fits my criteria. So I'm trying to figure out a way for Earth to have a new beginning, so that I can develop an entirely new world, while also maintaining the aspects of this one, with minor details changed. So let's say that an asteroid hit Earth. Would it be possible that it could set off a nuclear bomb, and possibly create a chain reaction of explosions that wipes off all life from this planet?

The meteorite started the war.

The country hit by the meteorite considered the impact an indirect attack by the nations that did not warn them.

For example; foreign space agencies collectively refused to inform Pakistan of the meteorite about to hit them. Pakistan is justifiably angry at every space faring nation, particularly India due to past conflicts. Given the chance of a nuclear war, NATO intervenes which China fears is western influence in Asia. This spirals to bring in all other nations.

Alternatively, the country hit is considered unable to retaliate and another nation takes the chance to defeat another nuclear power. Again an example featuring Pakistan and India; the meteorite destroys what is thought to be India's best protected nuke silo and Pakistan thinks it can destroy all of India's other nukes before India can strike back. This turns out to be wrong, and India retaliates with its remaining nuclear weapons. Again, the conflict brings in other nuclear armed nations leading to a general nuclear war.

An asteroid, or any impact really, cannot set off thermonuclear warheads, in the sense of causing a nuclear blast. These warheads are composed of disks of conventional explosives that have to go off in an extremely precise manner in order to achieve a proper nuclear detonation. If that doesn't occur - if they go off in any other configuration - all that happens is a modest conventional explosion. (It's fairly radioactive, similar to a "dirty bomb", but more importantly it's fairly small.)

However, an asteroid is totally capable of wiping out life on earth all on its lonesome. You might look up the Chicxulub impact, which caused extinctions on a massive scale although, obviously, it didn't totally destroy life on earth. But the next one could be bigger, if you want.

Not With An Asteroid

Nuclear bombs are not giant snap-caps just waiting to be jostled wrong to detonate. Outside of human error or intentional warfare a majority of nukes will not detonate.

It has been observed that some quantum particles can induce fission in fissile materials on at least a small scale. Years ago I spoke with a nuclear physicist about some sort of muon or gluon gun that could fire through the earth. Such particles have very very little interaction with most matter, but could, at high energy levels and in massive concentrations, be used to induce a fission reaction in the fissile material of a nuclear weapon.

In nature gluons and muons do not exist freely, but are found in the substance of an atom's structure. It would be massive handwaving here, but some sort of crazy powerful gluon pulse could induce nuclear warheads to begin fission and generate at least a low yield detonation. But we're talking a LOT of handwaving.

Why Bother With Nukes Though?

The gamma ray burst from a supernova could scour life off the planet down to a molecular level and occur naturally in space all the time. Why not just use one of those in your story?

Nuclear weapons are designed so that they cannot detonate by accident. Even if you had one inside a briefcase and dropped the 'case from a building, it wouldn't go off.

And if you want terminate life on Earth, worry not: just take an asteroid of pure iron, twice the size of the dinosaur-killer, and you'll make sure to have a long-lasting nuclear winter. The food chain will completely collapse, save for extremophiles, insects, some marine life form at the bottom of the oceans. With some luck, rats could thrive enough on the many cadavers left until they become the start of the new dominant life form in a million-years long future...

Not with current nukes because of physical shock, modern nukes are way too complex and stable. There are two ways something could happen though:

Neither of these solutions give you any kind of worldwide chain reaction but do open the door for localised unforeseen detonations because of a celestial impact event.

You might consider if the following scenario fits your needs:

A huge asteroid is coming towards Earth. Because people are scared, they decide to attack it with nuclear missiles. Some scientists/engineers say it will be enough to attack it at one particular point. Others say that that's entirely wrong. Attacking it in that way, at that time, will just create a giant cloud of radioactive (from the nukes) debris. It turns out that the latter scientists were correct.

This gives you the radioactive fallout problems of a complete nuclear launch while avoiding the problems associated with accidental triggering or a nuclear war.

There are two main pathways by which the asteroid could detonate the nuclear weapons: either through a chain reaction or by simultaneously triggering all of them.

This variant assumes that at least a couple nuclear weapons are set off by the impact, and these in turn trigger the others. This is unlikely; the Tsar Bomba, the most powerful nuclear weapon detonated to date, had a yield of 50 megatons of TNT - much, much greater than any weapon we have today - and caused damage hundreds of miles away. For comparison, if we look at the current arsenal of the United States, we see that the common W87 and W78 have yields of about 1% that of the Tsar Bomba. The W76 and W88 are even smaller; to replicate the Tsar Bomba's effects, you would need to detonate many of them together in a small space.

If you could do this, then you could impact structures and weapons for hundreds of miles around. But if warheads were only triggered in a couple of silos, the damage would be minimal, and limited to small areas; other launch sites would probably not be detected. If we look at where the weapons are distributed, we see that the operational storage sites (in red) are far apart in the United States. 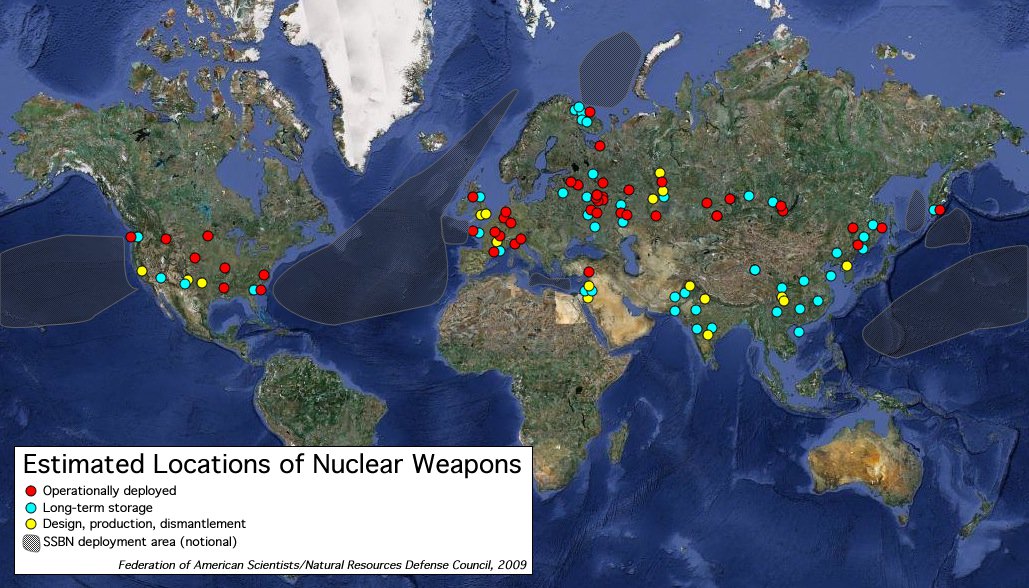 Map from the Federation of American Scientists.

Granted, each site then has a large yield, but you'd need all of the weapons at the site to be detonated at the same time to have any effect on the other sites. The same is true around the globe, although western Russia does have a higher density.

Now, alternatively, you could try to set off all the weapons at once. Here's the problem, though: you'd need a heck of a big impact to do this. Neither the US nor Russia has a majority of the world's deployed nuclear weapons, so you'd need to set off weapons across at least one country and then some. This would require an impact of colossal size to even reach, by some means, warheads thousands of miles away. Again, see the map above.

Of course, you could go for some sort of seismic activity. After all, the Fukushima disaster began when a tsunami disabled critical parts of the reactor, and the seismic waves generated by a large impact would be severe. Nonetheless, this would still require a massive impact, and given that nuclear weapons systems can withstand some pretty strong earthquakes - there have been no seismic-triggered detonations to date - this seems unlikely. The farther from the point of impact, the weaker the seismic waves.

Now, there is a third possibility, which is that a nuclear weapon would be triggered on a nation's soil. If the weapon wasn't detonated but was somehow launched - and I'll be honest, this is a really improbable scenario - that it's possible that the target nation would see this and consider whether the launch was an accident or a deliberate assault, with the impact as cover. At that point, you do have the risk of intentional, manual nuclear retaliation, and that could maybe achieve your goals. But that's a pretty far-fetched scenario.

I've purposely shied away from an even bigger problem: How would the object even set weapons off? Cadence talked about how there are a whole bunch of things that would have to happen for a single weapon to be detonated. So this asteroid would have to somehow destroy the sensitive systems that prevent accidental (or malicious) detonations without damaging the warheads themselves.

All that said . . . NASA has space rocks monitored fairly well. If something big was coming our way - big enough to impact an entire continent (pun intended) - then we would know about it long in advance. That would give the world time to plan and, more importantly, disable nuclear devices if it seemed like there was even the risk of some accidental detonation.

Yes. Though highly improbably (and highly implausible), the impact of a sufficiently large extra-planetary object with the earth at the right spot could detonate the majority of earths nuclear weapons.

Due to the precise timing required to actually detonate a nuclear weapon, all nuclear weapon designs in existence have a small vulnerability in that an energy signature (wave, fluctuation, etc.) at a specified frequency for a specified time could potentially arm the weapon.

A meteorite impact on the worlds largest quartz deposit would cause a Piezoelectric event that could very well cause this exact energy disturbance, unknown to the current world powers. The impact itself could release several different signatures as needed by the story, due to tumbling or other stage impacts from the event.

DISCLAIMER: a bunch of this is likely pseudo-science, but I tried to stray away from any hand-waving or suspension of disbelief.

The problem is what it takes to compress a nuclear warhead to critical mass if you forego the extremely precise triggering mechanisms they use.

That said, theoretically, a sufficiently large antimatter bomb falling from orbit could create a blast powerful enough to do it... On the other hand, once you get to that point the extra explosions will likely go largely unnoticed by the expanding cloud of gas and gravel that used to be called Earth...

Now, there are a few other possibilities that might give you what you want. For example, there are some rumours that the Russians may have cracked their tectonic plate testing nuclear bunkerbusters. If multiple countries in just the wrong places did something like that, it might be possible to trigger a crust slip. That would cause tsunamis worldwide and rearrange the climates of our various land masses by moving them to other lattitudes. If nuclear isn't a requirement a set of asteroid impacts at just the wrong angles might do the same thing.

I suppose you could also have a largeish meteor land in Yellowstone ( https://en.wikipedia.org/wiki/Yellowstone_Caldera ) and set that off. That could easily cause the end of modern civilization as well.

Not the answer you're looking for? Browse other questions tagged reality-check earth nuclear-weapons asteroids or ask your own question.

2
Global drought over about a decade
4
Colonizing a fresh Earth : where to place the first settlements?
8
Semiliquid atmosphere - Is my premise/conclusions correct; and will it get the result I want?
12
What is the smallest planetary mass that can prevent 'me' from flying off into space?
20
What would cause the land to “rise” in a future, post-apocalyptic world?
6
Genetic engineering as an alternative to magnetosphere (radiation protection)