How do I maximize a planet's wave height (on average)?

I am in the formation phase of a fictional world. I would like one of its notable characteristics to be extremely large waves. On Earth, most of our large waves are triggered by earthquakes, landslides and things to that effect. Here is an example from 2005: 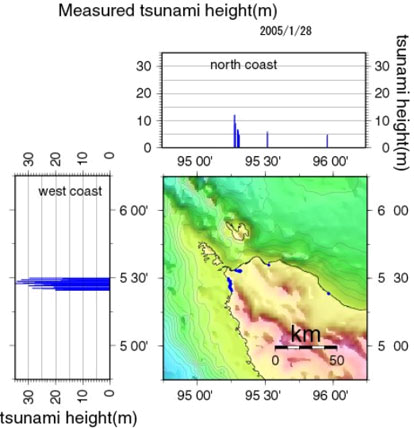 The graph makes the Earth tsunami look impressive, however this is more of an outlier. Most waves on Earth are much smaller. I would like to make my fictional world's waves to be triggered differently. Instead of sparse, infrequent natural disasters, I want something more dependable to allow for extremely large waves. This way the average wave height will be higher.

How can I maximize the wave height on my planet such that the waves average a very high number? Here I mean each wave is very large. I'm not so interested in occasional giant waves that raise the average, unless there is no other way.

Waves, indeed weather in general, are examples of highly stochastic outcomes; there is a lot of randomness and there are so many variables that come into play. This is what makes this situation very difficult but very interesting at the same time.

Below are clarifications to account for some of those variables. It is my no means an exhaustive list, but it's all that my knowledge base allows for, and is hopefully enough to frame the scope to be within reason.

For waves that have small heights relative to the water depth ($H\ll a$), we can use Airy wave theory. This works well for waves that are far out at sea, and can include tsunamis, in deep water. I wrote about this in more detail here, but to make a long story short, the height of a wave is given by $$H=\sqrt{\frac{16E_w}{\rho g}}\to H\propto\frac{1}{\sqrt{g}}$$ where $\rho$ is the density of the water and $E_w$ is the energy imparted to it. Therefore, on a planet with lower surface gravity, the waves will, in general, be higher, as wave height is inversely proportional to $\sqrt{g}$. Honestly, the same thing should apply even with Airy wave theory isn't appropriate, because the higher the wave, the more potential energy it has, and potential energy depends on $g$. In fact, gravity is the restoring force for all but the smallest waves (with frequencies of at least 10 Hz); at those tiny regimes, surface tension is more important.

Surface gravity can be written as $$g\propto \rho_\oplus R_\oplus$$ where $\rho_\oplus$ and $R_\oplus$ are the radius and density of the planet. Decreasing either will lead to lower surface gravities, and larger waves.

There are some additional - local, not large-scale - climatic factors that need to be considered for wind waves (not tsunamis):

As an aside, ScienceKeanu mentioned the large "waves" featured in Interstellar, where a planet orbits a black hole; the gravitational pull of the black holes causes time dilation and extreme conditions on the planet. I should just point out that these aren't actually waves; rather, they're the planet's extreme tidal bores, which occur regularly. Furthermore, they don't change the median wave height on the planet; the true waves shown seem to be fairly normal.

Ocean waves (normally) get their energy from wind.

Consistent, large swells on Earth come from the trade winds: strong winds over a long distance with consistent direction.

To increase those, you should have a lot of solar energy, a short day (higher rotation), thicker atmosphere and/or large east/west extents to your oceans.

Large cyclonic storms also make waves. The conditions for trade winds also help make lots of those. Because trade winds tend to only produce waves in certain areas, storm waves are important for the rest of the planet. California surfers, for example, study them relentlessly.

Just two things off the top of my head:

So a relatively freshwater ocean, oriented with a strong prevailing wind, and having few islands or other landmasses would have very high average wave heights.

Actually it's not that complicated: place your planet around a gas giant and make it orbit relatively close, like Io, et voilà, the gravity pull would generate monstrous waves.

The only disadvantage is that such a gravity pull would create huge internal frictions leaving the planet incredibly active with volcanic activity, probably a couple of huge eruptions a year would be usual in such environment.

If the planet is somewhat larger in size than Earth, and has equatorial oceans, so that the winds and waves can build up all the way around the world several times, the waves are likely to have an average height several times those on Earth.

Ash's answer says that lower water density allows for higher waves, so the water should have as low salinity as possible. If the planet has has a low density it could be larger in dimensions than Earth but have a lower surface gravity, which might compress the water in the oceans less.

I note that rubbing alcohol, corn oil, motor oil, and mineral oil are among liquids less dense than water. I also note that there are some atmospheric gases mixed in with water - sea life extracts oxygen from the water to "breathe".

Apparently there is a lot of methane gas trapped beneath the sea, and if it was released in large enough bubbles ships passing over those bubbles could lose support from the water and sink.

So possibly you could come up with a mixture of liquids and dissolved gases to dilute sea water on your planet and thus make waves bigger.

Bob Jacobsen's answer says that storms raise larger waves. And hot water makes storms stronger. So if your planet is close enough to its star,and/or the star is hotter enough than the Sun, the planet will receive a lot more heat and light hand have much bigger storm waves in its tropics. Hotter water would expand a little and be a little less dense than Earth water.

But as far as I can tell the most important way to make bigger wind driven waves on your planet is to have very large oceans going all around the planet so the winds can drive the waves around the world several times so the waves build up larger and larger. I don't know what the limit for wave size would be in that case.

I note that waves several times larger than the surrounding waves - rogue waves - are now known to be many times more common than were thought. So if someone travels to the region of that planet with the highest waves to watch them from a safe point they might perhaps see a really giant wave rising in the distance and headed toward them.

All of the answers so far post to the wind patterns, etc.

But those wind patterns only start the wave. The wave heights close to shore are determined by a few things already mentioned in the other answers, but also under surface geography.

Wave is moving, it has a certain amount of momentum. That momentum carries it forward, and closer to shore as the water starts getting shallower the wave rises up. Undisturbed forward momentum, combined with "climbing" the slope of the ground underwater, minus the effect of gravity pulling the peak of the wave down gives you your waves in general. Want them taller? More momentum, less disturbance of the momentum as it approaches shore, and a long slow rise from deeper water to shallow.

For details see this article on some cool mapping of the Mavericks in Half Moon Bay, California. Known for big waves (15m), famous surfing.

As waves get close to shore, their base begins to run into the seafloor, slowing the deeper parts of the wave. The shallower part of the wave keeps moving at the same pace, causing the wave to stand up and then pitch forward. This creates the wave face that is so sought-after by surfers.

Kvitek says that a long gradual slope, like the one at Mavericks, creates an exceptionally tall wave that holds up for some time before it breaks.

And the deeper waters on both sides of Mavericks’ “ramp” allow waves to draw additional energy from the calmer waters on either side. “It’s a combination of a gradual and steady decrease in depth combined with a wave convergence due to the deep troughs on either side of the ramp,” Kvitek says.

You can see similar slope off the North Shore area of O'ahu Hawaii in this (very large) picture .

Put the moon closer, or get a heavier one, so you will have a tidal wave four times a day, and probably much larger "usual" waves before and after tidal ones.

9
If an Earth sized planet had 1.5-5x more or less gravity than that of the Earth, how would it affect the shape of waves in water bodies?

20
What would be the tallest possible height for humanlike creatures in earthlike conditions?
7
Siamese Twin Planets?
10
How do I give my planet a stronger magnetic field? Playing with variables
5
How to Determine Planetary Extremes of Temperature from Average Global Temperature?
5
How do you map the climates and biomes on a tidally locked planet with no Coriolis Effect?
3
Is my large tropical continent too dry or not dry enough?
16
How would low-gravity seas affect ship design?