Feasibility of spacecraft constructed from ice

Eskimos in space! Let's say, just for contextual concerns, that a band of water-rich comet miners want to use water-ice found in the outer Solar System as the main structural and functional component of their spacecraft. That is, the spacecraft and perhaps some of its basic support functions (internal atmosphere, electricity & propulsion?) are derived from the properties of ice.

I'm not concerned with the constructional methods of such a spacecraft (given my source outlines it quite humorously), rather, How might a spacecraft of water (and any material state thereof) perform the basic aforementioned functions of a classical spacecraft?

The icestronauts have access to items like fission/fusion technology, and all the wondrous advancements of the current day, and any number of these things may be incorporated into the spacecraft's design, so long as the bulk of it is water-ice.

If you don't want to read the source—which happens to be practically the only source I can find for such an idea—the idea behind the ice spaceship's construction is this: launch a plastic "mold" into space (quite like an inflatable tube one might see at the beach), and fill it with water. Freeze the water, spin the thing up, and you're done! A functioning von Braun wheel made of ice. Now, my idea here is to attempt to expand upon this, make it feasible and practical: Water may be used as fuel; It can be heated into a gas and expelled out at high velocities; Oxygen can be ripped from H2O molecules; it has certain radiation-shielding properties; etc.

Postscript: the icestronauts are willing to settle on the use of other ices as well. Consider it an extension of the previous limitation of the addition of other technology to support the bulk of water-ice.

Edit: assume no other external factors will destroy the spacecraft; our icestronauts are not that foolish. Consider their efforts as R&D, searching for viable methods for this endeavor.

The main spine and functional systems of the vessel won't be ice obviously, but the hull very well could be. So you build your ship first. It's basically just a fusion reactor and a magnetic reactor plasma nozzle, a series of insulated and airtight habitat modules, and a control room. Then you begin freezing water around these objects. The ice provides great radiation shielding properties and is also an excellent ablative armor system against space-born particles and dust. The skeleton and operational parts of the vessel itself are standard spaceship fare, but the ice is what wraps it all together. With the power from your fusion engine you could easily melt the ice down to be used for drinking water, or electrolyzed into oxygen and hydrogen which could then be used for breathing and fuel. The icy hull of the vessel is a fuel source, air supply, armor, and radiation shield all in one!

Moving liquid water into space and then freezing it just isn't cost effective. Our outer-rim Eskimos don't really have much of a budget for that kind of thing. Why would they pay that much when all of these fantastically sized 10 to 60 kilometer chunks of ice are already just sitting there for the taking? These ice-ships attach to comets in the far outer solar system and use the heat and power from their fusion reactor to burrow into the comet. You now have a 10 kilometer to 60 kilometer wide spaceship just waiting for you to hollow out and build whatever your heart desires! You don't need the metal bits for cold storage areas or work areas, just pipe in enough heat to make it workable and use it for whatever. If you're tough, careful with where you hollow out, and don't mind sleeping in below freezing temperatures use the heated ice tunnels for habitat too. ("Heated ice tunnels" simply means "above the crazy frigid temperatures of space" not above the freezing point of water.)

The best part? Even a rather ordinary sized comet of 10 km in diameter contains approximately 1 trillion metric tons of usable water for air, fuel, and drinking. That's enough to last a population of a few thousand several generations as an orbital igloo. Obviously all of the actual functioning parts are not ice, but once you attach an engine, reactor, and habitat module to it and fill it with room I am going to say that the comet now qualifies as a spaceship made of ice.

Over time the tribe carves the comet into a cylindrical shape which they can rotate to simulate gravity. In the meantime they have sections built within the ice that perform such tasks and take turns living in microgravity in shifts to perform the work needed to accomplish the task of constructing all of this.

A spaceship is not only a shell. It's a sophisticated shell. it is filled with electronics, piping, sensor arrays...windows.

The ship should be assembled in geostationary orbit on Earth's nightside, or the sun will melt some of it at each orbit. Then you must digdigdigidg in the mine all day through...err, you need to dig into the ice with outmost precision, possibly using thermal devices to minimize the cracks in the shell. Oh, and all of this must be done with an outer coating all around the ship or the sublimation could make work more difficult.

This said, after all the surgical work is done, apply propulsor. Cheers! All aboard, turn propulsor on.

If the crew is lucky, they will see the ship melting away starting by the tail while the rest of the hull sublimates under the sun's solar wind.

If the're unlucky, the propeller's vibration will crack it apart

There is a viable, though much more rudimentary alternative: instead of building a ship as we imagine, since aerodinamics is nt a thing in space, our heroes could freeze enough water to create a massive iceberg, carve it for their needs and place a network of ionic propulsors. Of course, it leaves to desire in terms of landing and reusability, but it would make for a great one-way ship.

OK, so you need to transport in orbit some million gallons of water, which would make it incredibly costly. Sheesh!

Since the OP already makes reference to the NEOfuel "ice ship" design, using a giant plastic or metal foil bag to hold the water until it freezes into ice and creates the hull of the ship, I'll point out a similar idea on a smaller scale: the Spacecoach.

The liquid water is held between what are essentially two water balloons, with the outer one being the outer hull, and a smaller, inner one defining the crew and equipment area. The liquid water filling the interspace provides radiation protection, drinking and wash water, passive thermal management, water for the hydroponic gardens, and reaction mass for the propulsion system.

Really the main difference is the water is not frozen to be used as a structural material, and even an ice ship would be doing something similar, since the ice has to be melted to do most useful functions in the ship.

The other issue that will need to be addressed is the gathering of the ice and turning it into useful products. Humans cannot drink salt water or water contaminated with methane, ammonia or the various other materials that form "ice" in the outer solar system, and many pieces of human machinery would also corrode or be damaged by contaminated ices. Contaminated ice or water would also kill plants or any biological systems it comes into contact with (unless it is extremely exotic).

The ice would have to be mined, then brought to the focus of a large solar mirror (possibly inside a large plastic or metal foil bag). The heat of the sun then boils the water and pure water steam is extracted into a cold trap to turn into liquid water or ice, while the other volatile elements are redirected and stored elsewhere. You need a large solar distillery, in other words. The water can then be pumped into the Space Coach, or into the flexible mould to freeze into the appropriate structural shapes. 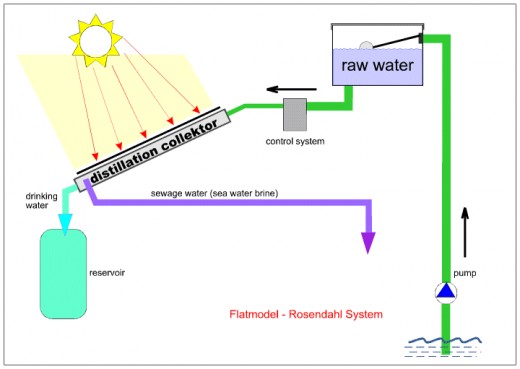 This, but on a very large scale

So there is more than just getting water from comets or asteroids to making ice or water ships, a large industrial base will be needed as well to mine and extract pure water, and create the flexible metal or plastic containers needed to hold the water or ice, as well as make the actual spaceship systems embedded within.

This would not last long - as with all things in space, heat management will be a problem. People say "space is cold", but it really isn't. Things in space tend to be very cold, but space itself is the universe's most perfect thermos.

Everything you do produces waste heat. The heat from the powerplant would likely be the most extreme, but everything produces heat, so every bit of power you use needs to be accounted for. This produces heat to an extent that ice should not be relied upon for any kind of structure or even have significant contact between the ice and the rest of the ship.

As a way of storing ice, sticking it in a shell around the outside of the craft (but not touching except for a few insulated standoffs) is a great method. It provides a kind of shielding, and if you don't mind losing a lot of it as you go along it can also act as an enormous radiator to keep you from overheating (probably a good emergency backup but not good as a primary radiator if you don't want to lose a lot of water).

Not the answer you're looking for? Browse other questions tagged spaceships space-constructs .