Is using mine shafts to control a building's temperature logical?

I'm writing a story where there is a large mining outpost built on a moon. This mining outpost is one large building holding around a thousand people, with an extensive system of passages and mines under the complex. I would imagine there would need to be ventilation shafts to supply air to the miners (this moon/planet does have a breathable atmosphere). I would like for the purpose of the story to have shafts connecting the passages directly to the walls of the compound, instead of simply ventilation holes on the surface of the moon.

Is it logical to use mine shafts to control temperature. And if so, would the air likely be hot, providing heat, or cold, cooling the residents?

I once lived in Idaho's Silver Valley, wherein are many, many mines. 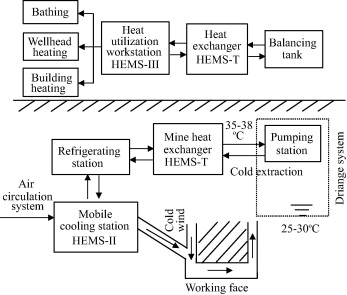 Note the upper left-hand area where the excess heat collected from cooling the mine areas is utilized in various ways.

You can't simply do this with an air exchange. Remember the pressures involved. Yes, heat rises, but nowhere near fast enough for many reasons, one of which is increasing air pressure as you descend into the mine. Like the Earth's atmosphere, the air is warm at the bottom where it's thick and can hold lots of heat, and cold at the top where it's thin and can't hold as much heat. Therefore, from the perspective of realism, you can only heat your colony through the process of removing heat from the mine as real mines do today.

No mining company in its right mind would leave the mine shaft exposed to human habitation. In other words, it wouldn't be enclosed for any reason. Let me introduce you to the idea of an "air blast."

Air blasts occur for a variety of reasons, but one of the worst is that a big chunk of rock face at the bottom of the mine shifts. It needn't shift by much. Sometimes only tens of feet, but you need to understand the astronomical inertia involved along with deep-mine air and rock pressures. A massive amount of energy is released and it's following the path of least resistance: the air channel to the surface. The result is an air blast.

Air blasts kill miners. I could hear the air blasts from deep mines (2,500+ feet) on the surface 30 miles away. An air blast would obliterate anything enclosing the mine head. They represent, quite literally, the world's biggest cannons.1

So, no living near or enclosing the mine head. Nope. Nosireebob. Anyone with mining experience (or related to a miner) who reads your book would instantly recognize that as unrealistic.

1 No, you couldn't actually fire a round via an air blast. The weight of a munition round large enough to fit in the mine shaft would be too heavy for even an air blast to push. Frightening as they are, they can't be used as ranged weapons — just in case you were wondering. Physics be a harsh taskmaster, yessiree.

passive cooling using underground tunnels has been practiced for hundreds of years, Derinkuyu in turkey is famous for it as are several persian cities. By combining windtowers and subterranean wet tunnels (qanat) they can cool buildings by tens of degrees. The design exploits low pressure created by wind induced suction to draw in air cooled by the evaporative cooling on the qanat.

Using deeper tunnels you can heat a building use geothermal heat as manassehkatz mentioned. 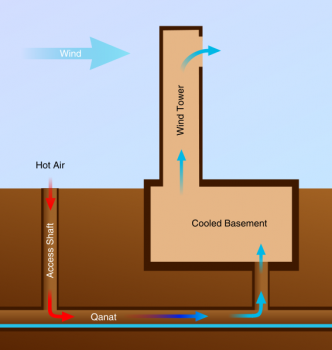 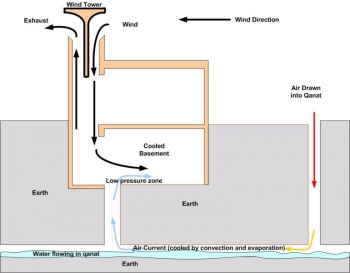 A Geothermal Heat Pump can work well on Earth for both heating and cooling. If you have a moon/planet where the temperature below ground is fairly constant (like Earth) but has dramatic swings above ground due to issues with the atmosphere, length of day or other factors, then a geothermal heat pump is an ideal solution. Natural air convection through the mine shafts would not be enough to do the job. Even pumped air (blowers) would not get the job done, unless you moved it an unsafe speeds. But if you dig mine shafts for other purposes and install a pumped liquid system, then you can easily transfer heat to the surface when you need it and away from the surface when you don't. You would need large heat exchangers installed in the mines and small ones in each living area. All the necessary technology exists - and is in use - today on Earth.

But if you duct air out to provide warmth or coolness, you're going to change that -- either by cooling or warming the air so it loses it's effectiveness. So yes, this can work, to provide either warming or cooling (but not both) but not on a large scale like whole blocks of office buildings.

Not the answer you're looking for? Browse other questions tagged science-fiction space or ask your own question.

6
Blocking sunlight using space debris
13
Who should mine the Asteroids? Humans or Robots?
25
Which gas giant of the solar system could humanity mine and for what resource?
34
Why would astronauts go to space to mine asteroids?
8
How do I actually mine an asteroid?
5
What does the physiology and biochemistry of a vacuum adapted post-human look like? Part 2: Temperature control
4
Creating a Matryoshka Shell world: temperature regulation